Kent Police put in place a 24-hour dispersal order in Margate yesterday (June 25) in a bid to tackle disturbances that broke out on the seafront in the evening.

Officers were called to two separate disturbances in Viking Bay, Broadstairs at 6.20pm and on Margate Main Sands at 7.15pm.

In both instances, no criminal offences and no injuries were reported to attending officers but one man was arrested on suspicion of possession of an offensive weapon after the dispersal order was enacted.

British Transport Police were also called to a large disturbance at Margate Railway Station at 8.04pm.

A BTP spokesman said: “There was a disagreement between a large group of people. No offences were recorded and officers gave words of advice.”

“We are also using every tactic available to us to deal with violence in the district and yesterday put in place a 24-hour order which resulted in a man being arrested in Margate on suspicion of possession of an offensive weapon.

“At the same time as tackling anti-social behaviour and violence, we are also continuing to engage with anyone found in breach of the coronavirus restrictions, to explain why they are necessary and to encourage them to comply.

“Enforcement through the issuing of fixed penalty notices is only being used as an absolute last resort in line with national guidance.” 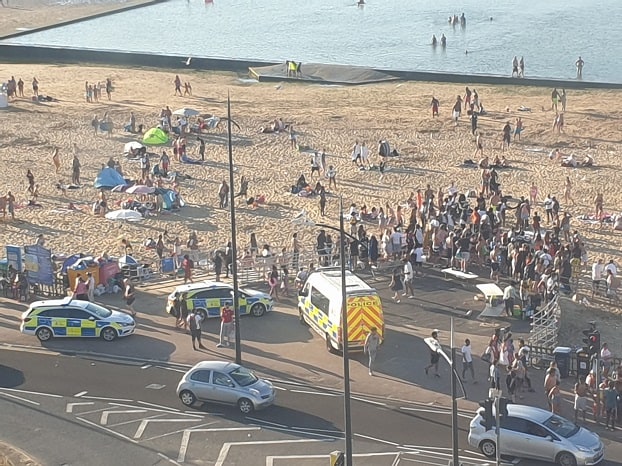 The incidents came at the end of a hugely busy day on Thanet’s beaches with one resident saying you couldn’t “even see the sand” at Margate. Similar crowds descended on Botany Bay.

Thousands of visitors came to the isle, many leaving behind mountains of litter that council staff and volunteers started to clear this morning.

According to The Independent Health Secretary Matt Hancock said yesterday that beaches could be shut if people continue to ignore social distancing rules. The comment was in response to the major incident declared in Bournemouth.