This is the tide of filth left behind by beach-goers in Margate yesterday (June 25).

Piles of booze bottles, empty chip boxes, plates, wrappings and even a child’s inflatable were discarded across the main sands by people who did not bother to take their trash home.

Some visitors did use the bins which were overflowing by the afternoon. Similar mess was left at other beaches including Botany Bay.

The appalling mess was left despite Thanet council having put extra bins in place from the May bank holiday. Extra cleaning crews had also been put in place, equating to a full summer service, following “disappointing” litter left behind by visitors last month.

Residents were astonished at the sheer number of people crowding onto beaches including Botany and Margate Main Sands with many saying the isle had been busier than most Summer holiday weekends.

In Margate fights were reported at the King’s Steps, another by the Nayland shelter and a further brawl at the railway station. 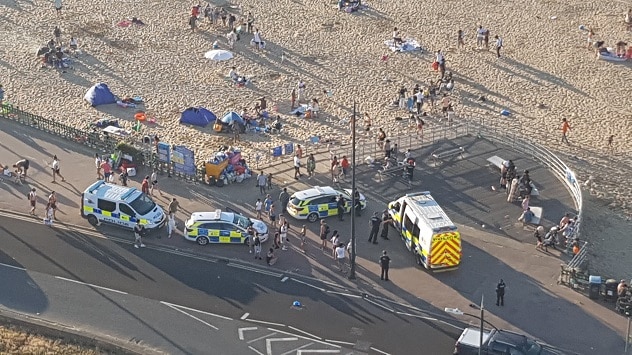 In Botany Bay an emergency services crew called out to deal with a fire caused by a beach barbecue took 15 minutes to crawl along part of botany Road due to inconsiderate parking.

A resident in Botany Bay said cars were still arriving at gone 8pm  and police had closed access in the afternoon because of the growing danger of emergency vehicles  unable to get through.

Thanet council, via its twitter account, said “thousands of people” had visited the isle and urged them to make sure they took their rubbish home. The plea clearly fell on deaf ears.

A Reading Street resident said hundreds of people had also descended on Joss Bay. She added: “This is what Joss Bay car park looked like at 6.30am this morning after the absolute mayhem there yesterday with hundreds and hundreds of people crowding onto the beach and blocking up all the roads leading to it. 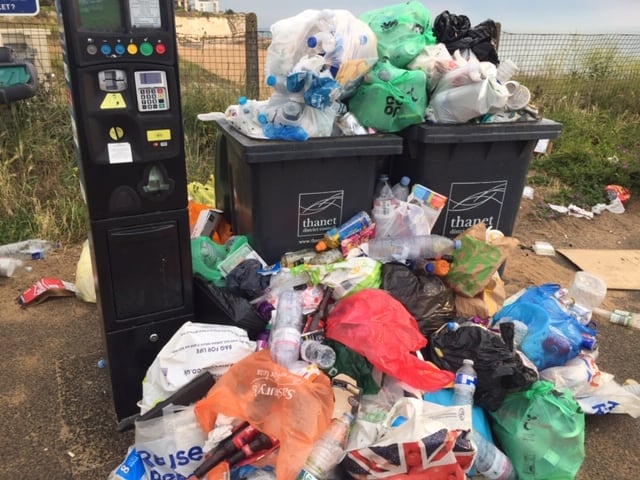 “It was the worst I have ever seen. Beach, car parks roads and fields all covered in litter. Bournemouth is not the only beach that’s affected by these thoughtless idiots.”

There have been calls for an alcohol ban on the beaches but it is questionable whether Thanet has the resources to enforce such a ban.

Concerns have again been raised about a lack of social distancing and the potential for transmission of the coronavirus.

Currently the R rate – the number of people a carrier would infect – stands at 0.7-0.9, below one but only by a small margin.

According to government data 43,230 people who tested positive for covid have now died. This number is likely to be greater with some experts saying it is nearer to 65,000.

There have been 684 covid-positive cases in Thanet.

She said: “ I think it’s time for some clear leadership and better guidance about the overcrowding that’s now happening on some of Thanet’s beaches.

Chris Whitty, UK Government’s Chief Medical Officer has based all of his advice to us regarding dealing with C19 on robust scientific evidence. He tweeted ‘COVID-19 has gone down due to the efforts of everyone but is still in general circulation.

‘If we do not follow social distancing guidance then cases will rise again. Naturally people will want to enjoy the sun but we need to do so in a way that is safe for all’.

“Bournemouth saw an estimated half a million people descend on their beaches yesterday and their council declared a ‘major incident’. They simply could not cope.

“Yesterday we saw overcrowding and more fighting on our beaches. In many places social distancing was extremely difficult to implement. If we don’t continue to heed the need for the social distancing we will see a spike in the virus locally.

“We must act together in the continued interests of our families, of those that have to shield and also our public sector workers in the health sector and our council workers. They are being put at further avoidable risk.

“When local businesses open on  July 4, visitors will have more to do and will therefore be more spread out which will help us all to adhere to social distancing.

“Caution is needed to safeguard health. We need to continue to be vigilant about the social distancing. Overcrowded beaches are a hazard.”

According to The Independent Health Secretary Matt Hancock said yesterday that beaches could be shut if people continue to ignore social distancing rules. The comment was in response to the major incident declared in Bournemouth.