A pedestrianisation plan for Margate has been put forward with the aim of creating areas where businesses could use the space for tables and chairs to help with social distancing.

Margate architect Sam Causer has drawn up the plan with backing from numerous town businesses.

The idea, which Sam says is open to change, could see cars banned from the stretch of road running from the clock tower to Turner Contemporary during set hours of 6pm-10pm in the week and 10am to 10pm on weekends and ‘festival’ days.

The temporary measures could be built on to make permanent adaptions.

Sam said: “I sketched out the proposal voluntarily with feedback from a number of local businesses, residents and Thanet council Heritage Advisor Nick Dermott. It is to create a pedestrian-friendly, safe and pleasant environment for retail businesses to operate over this summer in response to the Covid-19 crisis, also providing a testing ground for longer-term, permanent change.

“It is temporary, quick, (relatively) cheap, collaborative, experimental and adaptable. It aims to accommodate the needs and expectations of businesses, residents, visitors, and those responsible for maintenance and provision of utilities.  It is also necessary to create a safe and profitable environment.” 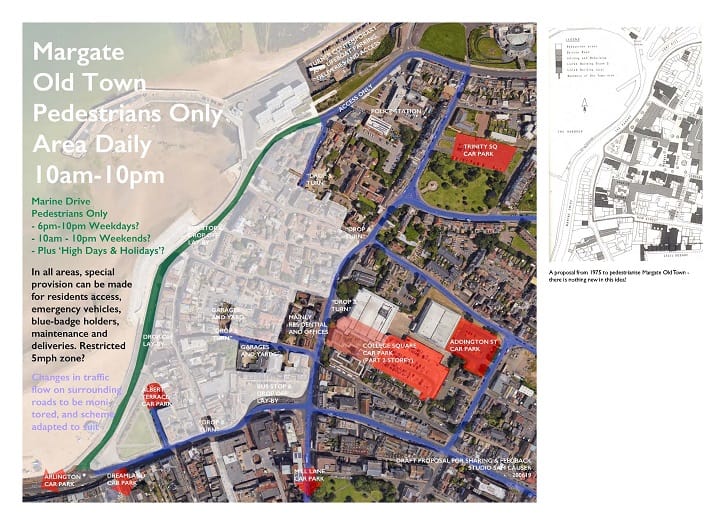 The plan is inspired by one mooted in 2010 when consultants Jacobs were commissioned by Kent County Council to develop a conceptual masterplan for improvements to the public realm of Margate Seafront and Station Approach.

The current proposal, which has received the backing of North Thanet MP Sir Roger Gale, is an attempt to embrace the ‘care and respie’ health heritage of Margate.

Sam said: “This proposal builds upon the research and principles of the 2010 Jacobs Report looking at making a pedestrian-friendly journey from the railway station to Turner Contemporary.  In our new digital, online age, High Streets and Town Centres need to adapt. They no longer cater so much for ‘need’ as for ‘desire’ and ‘experience’. Many of our consumerist needs are being met online or at Westwood Cross, allowing our town centre to cater instead for providing high quality spaces for social interaction and well-being, and for this they need to adapt or die.

“Many people and organisations operating in the area are independently calling for similar plans. Some suggest a large one-way system around Marine Drive / Elephant Hill / Hawley Street, for example, which could be interesting to try.  The differences in detail of what people are suggesting is not important – that can be worked out by TDC and KCC officers experimenting on the ground. What all people share is the need to be bold and quick to allow the town to open up, maintaining livelihoods and well-being.

“I do not suggest this is the best solution, it is just a start, open to change. I implore TDC and KCC to look more closely into it, adapt it, enact it, monitor it, reflect upon it and adapt again.

“I am also looking into other areas of town including Northdown Road and Canterbury Road, which have different and complex issues to resolve.”

Responding to the proposal Sir Roger said: “Not only is this concept worth re-visiting but I raised it myself during our MP’s weekly `virtual meeting` with the Leader and CEO of TDC.

“It is clearly not quite as easy as we would all wish; re-routing the traffic from the station around the back of the town has raised considerable objections in the past and would no doubt do so again and we have to get KCC and the police on board before making radical changes.

“We also, particularly at the moment, need to make sure that we do not deter what little trade remains in the High Street. However, the issue is on the table.”

Some have raised concerns that it might result in less trade and cause traffic chaos on surrounding roads but Sam says the plan is fluid and could look at trying a number of different suggestions.

A long-term version of the work could be funded from the £25million earmarked for Margate from the government’s Town Deal Fund. One of the areas outlined in guidance for spending the money is urban regeneration to make an area more attractive and accessible. Another guideline is for local transport, including pedestrianised areas.