A fundraiser has been launched to help a Margate couple buy a headstone for their baby son.

Kirsty Stead, 23, and Jack Shaw, 28, had been preparing to take their firstborn son home but instead they are grieving and left facing the cost of a headstone after baby Reid was stillborn in November last year.

Kirsty initially had an easy pregnancy but then experienced reduced movements and then excessive moving about from her baby.

She said: “As far as the midwifery team were concerned I was a new mum who was panicking and exaggerating. I didn’t realise then that there is a policy after 2 reduced movements to offer you an inducement. I was not offered this is and didn’t realise it was a possibility.

“The third time I went to hospital for excessive movements I believed I was in labour and was excited to meet our boy.

“I was kept in overnight as I was having irregular contractions but the following morning the contractions had stopped and I was told I was in slow labour and baby could come then or in a few days so they wanted to send me home. 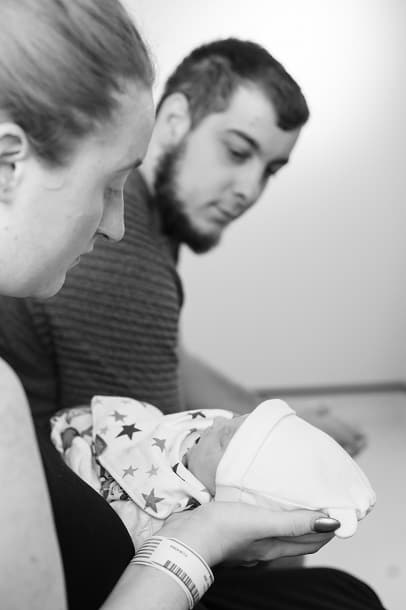 “I was given routine blood tests and told I had a slight infection. I asked if this would harm me or the baby and was told no as it was slight and should clean up by itself. They decided not to give me antibiotics because I have allergies to certain medicine.”

Kirsty went home but several days later, on November 7, she began suffering pains. In the evening the pain was so bad, and baby was moving round excessively, that Kirsty called maternity triage and was advised to take paracetamol and try to get some sleep.

Another call to the midwife was made the following morning and it was that evening that Kirsty noticed her baby was not moving around.

Kirsty went through labour and baby Reid was stillborn the next morning, November 8, weighing 6.8lbs.

The couple, who have limited family to help, not only had to cope with the loss of their son but also had to organise a funeral and pay the extra costs of that and now have to find the money for baby Reid’s headstone.

Kirsty said: “We didn’t know this was going to happen so all our money went on buying things we would need for when we brought him home. When this happened it was a huge shock. We had been in the middle of looking to move as we only have one bedroom and had all the baby things and then the next thing we know we had to try and get money overnight towards the funeral although there was a bit of financial help for that.

“It has all been so difficult. I don’t have a lot of family and nor does my partner. The family we have helped as much as they could but no-one has this kind of money just there..”

The couple now desperately want to raise £1,500 for a  ‘Bubble and Squeak’ headstone which has an elephant and a mouse on it, prompted by Dumbo items that had been bought for Reid.

Kirsty said: “Everything happened literally overnight, it was like a massive bomb that went off. Now we have to pay for all this stuff alone. We just want to be settled, we want our boy to be settled in his forever bed, he deserves that. Then perhaps we can focus on grieving.”

A Healthcare Safety Investigation Branch review was carried out into Kirsty’s care. The findings of the report say much of the care was appropriate but highlighted that the infection Kirsty was suffering “significantly contributed to, or caused, the death of the baby.”

The report also said Kirsty was not given the opportunity “to consider the risks and benefits for an induced labour after 39 weeks in line with national guidance for the management of reduced fetal movements,” and Kirsty did not have clear guidance on urgent and non-urgent contacts.

HSIB advised East Kent Hospitals Trust – which is responsible for QEQM Hospital – to “work towards ensuring that signposting and advice for mothers on how to contact the maternity care team is made clear to facilitate improved access in emergencies and outside of community working hours.”

The report also stated: “The maternity triage team were not alerted to the frequency of contacts the mother was making to the maternity service for advice in early labour which may have been viewed as a ‘red flag’ and prompted the mother to have been invited in for assessment earlier.”

The report did found other areas of care had been appropriate and in line with national guidance.