Michelle Thomas grew up in London, went to school in Sandwich and moved to Ramsgate in 2015. She works in PR and marketing.

A couple of weeks ago my nine year old son, my five year old dog, and I walked from Ramsgate to Broadstairs on a sunny Saturday afternoon. It’s a walk we often do, ending in lunch or an ice cream at Morellis, but this time it was different. 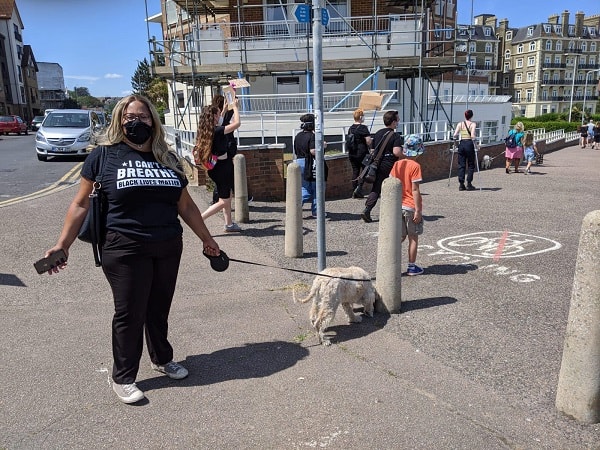 We walked as part of a group of more than a thousand people. Everyone was masked, and maintaining social distancing. We walked quietly, somberly, in our black clothes, apart from when we chanted. We were there to mark the death of a man who none of us knew.

Why were we marching for a man we didn’t know? A man on the other side of the world, murdered by a policeman who knelt on his neck as he gasped for breath and called out for his mother?

For me, George Floyd’s death is the match that lit the touchpaper. We have a Prime Minister who writes about picanninies with watermelon smiles and regrets the end of colonialism and a white supremacist as the leader of the free world.

It’s more than 50 years since Dr Martin Luther King was assassinated and yet black and brown people all over the globe are still exploited by a system that doesn’t see them – see me – as fully human. British people didn’t just act out of solidarity. We acted because we too struggle against racism. We are ‘lucky’. We live in a ‘tolerant’ society… Tolerant. Thanks for allowing us to be here, as long as we behave…

It was from this burning sense of injustice that the Black Lives Matter movement was born. There isn’t enough space for me to explain the long and ignoble history of racism in the US but suffice it to say it is essentially apartheid, and as in South Africa, the police are a crucial part of it.

In 2012 Trayvon Martin, a teenage boy, was walking through a Florida neighbourhood when he was shot. Shot for going to the shop to buy Skittles. The man who shot him was acquitted. The ensuing protests and outrage was the start of the BLM hashtag, and it has now spread to 36 countries.

A lot of people object to this. ‘All lives matter’ they say. Well, of course all lives matter. Black lives matter AS WELL. Black lives are threatened in ways that other lives aren’t. Black Lives Matter is a global movement seeking justice for everyone. A racist society is toxic for all who live in it.

So I was extremely disappointed by Mr Mackinlay’s newsletter yesterday (June 22) – on Windrush Day, of all days, a day created, FINALLY, to celebrate the lives of the people who came to rebuild a country that has barely recognised their contributions –  comparing Black Lives Matter to Nazis with his references to burning books.

Why are some people so threatened by the idea of equality? Fear of a Black Planet? Maybe, but black people don’t want revenge. We don’t want to subjugate white people. We just want equality. Fairness. A level playing field. I don’t want to be having the ‘talk’ with my son. I don’t still want to be fighting this fight in 2030, 2040, 2050.

Mr Mackinlay, I extend an open invitation to you, to discuss the Black Lives Matter movement, and racism in Thanet.

Michelle has written an open letter to Mr Mackinlay asking for a retraction of the comments and requesting a meeting with local BAME and other community groups.