Around 1,000 people, and increasing, left from Ramsgate bandstand for a Black Lives Matter march to Broadstairs.

The event, which follows on from a march going from Cliftonville to the King’s Steps in Margate last weekend, will stop at Broadstairs bandstand in Victoria Gardens.

Worldwide demonstrations have taken place in response to the killing of black American George Floyd after a police officer knelt on his neck for just under 9 minutes during an arrest in Minneapolis.

At the destination of the event, organised by People Dem Collective, participants will kneel for 8 minutes 46 seconds in silence – the amount of time police officer Derek Chauvin had his knee on George Floyd’s neck.

Participants have been asked to wear protective masks, follow social distancing and bring food and water. They are also asked to wear black with one colourful item.

Ahead of the protest Thanet council boarded up the ‘Uncle Mac’ plaque on the sea front which marks the life of the blackface minstrel.

Uncle Mack led a troupe of black face paint performers between 1895 and 1948.

A petition has been raised for its removal due to the practice being a demeaning caricature of black people.

The petition site says: “The Blackface tradition that Uncle Mack’s plaque represents is now widely regarded as an embarrassment and a shameful spotlight on Britain’s racist past.” 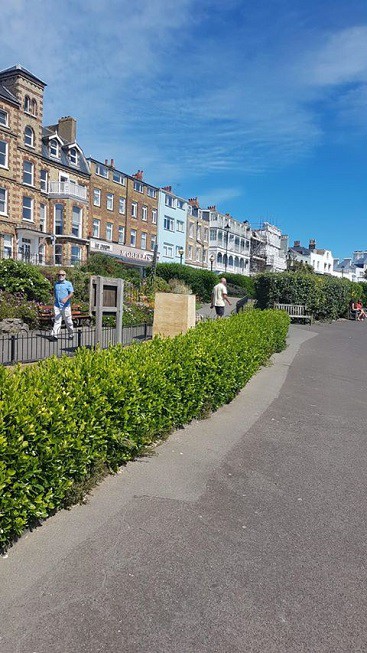 Thanet council has attached a notice to the site saying the council is reviewing the status of statues and commemorations within the district.

Kent Police officers are in attendance at the demo.

Responding to a query about social distancing at the event officers said: “We have a legal obligation to facilitate peaceful protest and will be encouraging people to adhere to the Government advice.

“Unfortunately we cannot enforce social distancing but will be engaging with those in attendance to remind them of why it is necessary.”

Kenwa, from People Dem Collective, said: “Today was the definition of unity. The amount of people from here and surrounding areas, young and old and people of every colour together as one. nIt was beautiful to witness, be part of and organise.
“The movement will continue and we, the people dem will create change.”
District councillor Aram Rawf, who has taken part in both marches, has accused South Thanet MP Craig Mackinlay of being “blind” to racism on the isle following a column written by the MP recently where he said: “In my 5 years as South Thanet’s Member of Parliament, I have received few, if any, reports of local racism.”
The MP said the death of George Floyd was ‘horrendous’ but added that he found the forced removal of statues such as Edward Colston “troubling.”

Cllr Rawf said: “Mr Mackinlay has commented publicly about the marches and demonstrations triggered by the killing of George Floyd in America but hasn’t said a word about the protests taking place in his own backyard. 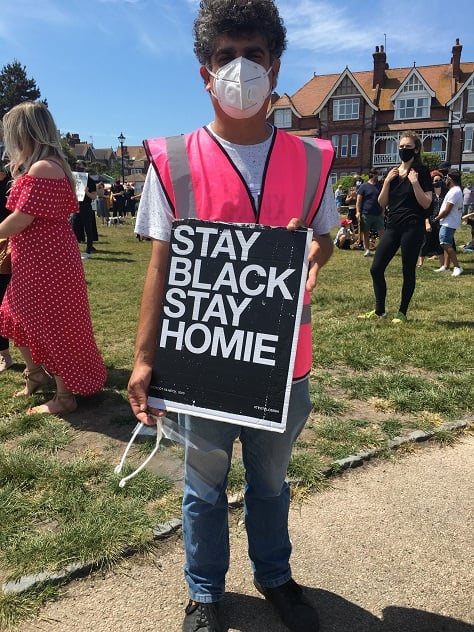 “These are the biggest anti racism protests Thanet has ever seen. Can he really not be aware of them? Or is he all too well aware and just trying to deny they’re happening so he doesn’t have to do anything about them?”

Mr Rawf, who is also a Broadstairs town councillor, believes the MP for South Thanet is trying to play down concerns about racism in the area.

“Has he forgotten during his parliamentary campaign in 2015 that the first White Life Matters demo attended by known members of racist groups in Europe was held in Thanet?”

Mr Rawf added: “Racism is widespread in Thanet. I know this from my own personal experience. Mr Mackinlay is blind to racism here. When will he open his eyes to something that is causing pain and suffering to so many of his constituents?”