Around 500 people, including families and children, met at the Viking Play Park today (June 7) in a show of support for the Black Lives Matter movement. That number continually grew throughout the afternoon as the protest moved from Cliftonville to the Margate Steps, resulting in a gathering of at least 2,000 people, possibly more.

Protests have been held worldwide in response to the killing of  black American George Floyd in Minneapolis.

Derek Chauvin, a white officer, pressed his knee into Mr Floyd’s neck for almost nine minutes during an arrest while he was handcuffed face down on the ground. Officers involved have been suspended and charges brought.

Organised by People Dem Collective, participants to the ‘Margate to Minneapolis’ march have met at the Viking Ship play park in Ethelbert Terrace, Cliftonville. Protesters have walked along the coastline to the Margate steps, opposite The Parade, to then kneel for 8 minutes and 46 seconds.

One of those at the demo is Sarah Dryden who has travelled from Whitstable to take part. She said: “We’re here not to be silent and to march in solidarity. It all needs to stop.”

“The horrendous killing of George Floyd is only the tip of a huge systemic problem that affects us here in the UK as well. We all need to make our voices heard against it.

“This protest is part of Thanet’s proud history of anti-racist activism including the fantastic “Calling Time On Racism” campaign that encourages Thanet pubs and venues to make sure racism in any form isn’t welcome.” 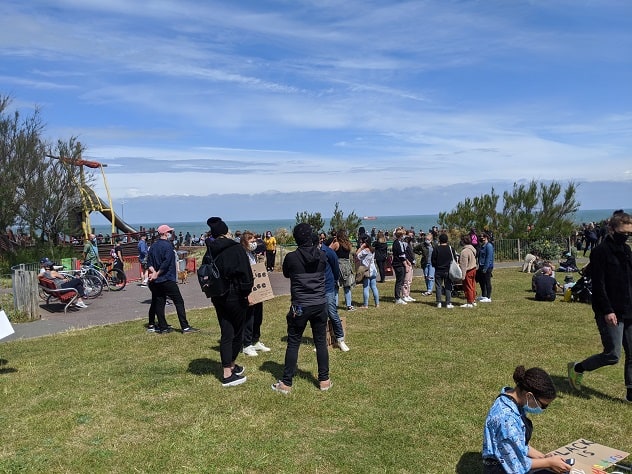 Concerns have been raised over an organised gathering during the need for social distancing due to the covid pandemic.

Current covid restrictions allow individuals to meet in  groups of up to six but all must social distance and meetings must be outside where the risk of transmission is lessened.

Earlier this week Health Secretary Matt Hancock appealed to the public not to attend gatherings and demonstrations in groups of more than six.

Prior to the event organisers of the protest asked those taking part to wear protective masks and to practice social distancing. Some at the event say although there are many wearing facemasks the 2m social distancing guidance had not been followed by all due to the size of the crowd. 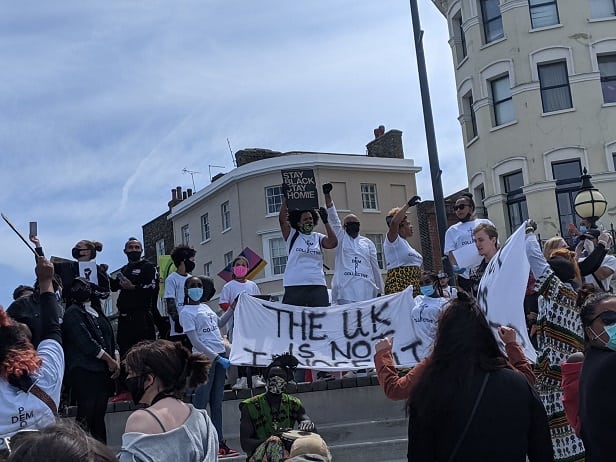 Restrictions initially put in place on March 23 have been eased over recent weeks but in the south east the R rate – the number of people the virus may spread to from an infected person – still stands at 0.97.

This rate needs to be below one to decrease transmission. The south east figure is the third highest in the country behind the south west at 1 and the north west at 1.01.

A second protest is planned for next Saturday from noon with a march from Ramsgate town centre to Margate seafront. This will again be followed by kneeling for 8 minutes and 46 seconds.

Participants next weekend are asked to wear protective masks, follow social distancing and bring food and water. They are also asked to wear black with one colourful item.

The demonstration in Margate ended at 1pm, 90 minutes after it began.

There were no reports of trouble during the protest and police attendance was not required.

A spokesperson for the event said: “The organisers had masks and gloves to give out free to those who wanted them. Most had brought their own and every effort was made to keep people safe while protesting an incredibly important matter. I heard “keep to social distancing” as much as the crowds protests.

“There were a lot of people passionate about ending racism, Hopefully it goes beyond the here and now, and we start to tackle systemic racism here in the UK as well as globally.”

Prompted by today’s protest Caroline Dyal, of the Portraits of Margate project, has also shared this video (below).

She said: “My husband Rohan Dyal wrote and performed this song. It is about his family Guyanese history. He wanted to share this song again to raise awareness.

“The issues surrounding the ‘Black Lives Matter’ movement are many and complex. One important aspect is that of slavery and how it was carried out over centuries particularly by the British Empire and in America. This song tells a story of an Indian family and their descendants as they move from India to the West Indies under the British Empire and then finally to the UK . The animation was created by James Frost.”

The song can be purchased by clicking on the following link:-
https://cavada.bandcamp.com/releases

All proceeds go to the Coram Foundation which supports vulnerable children throughout the UK including those who were left to fend for themselves due to the Windrush scandal.