Thanet foodbanks are faced with massive increases in demand for help while also coping with shortages of stock during the coronavirus crisis.

Around 1,200 food parcels have been distributed to people across the town, a fourfold increase from 300 over the last four weeks.

Ramsgate Cllr Karen Constantine (Lab), who has donated £8,000 of her county grant to support residents in her division, has called on Kent County Council (KCC) to set up a “central fund” to distribute cash to poorer towns.

However, KCC’s leader, Cllr Roger Gough (Con), chose not to back the idea during his second cabinet virtual meeting yesterday and instead suggested councillors draw upon the “pool” of extra resources at Maidstone County Hall.

He said the county council would continue to review and ensure that food banks can cope with demand surges, adding: “Members are free to use their grants in whatever way they judge most benefits their divisions.”

A surge in reliance on food parcels has been seen in Kent’s poorer communities and places where universal credit applications have risen, including in Thanet.

Ramsgate town council workers, Salvation Army staff and representatives of Margate’s Global Generation Church have been sending out more parcels than ever before.

The majority of these parcels contain tinned food, such as beans, as well as tinned meat and vegetables.

Much of the distribution is being carried out by Ramsgate Town Council staff, with input from town clerk Richard Styles, and community volunteers including Councillor Becky Wing.

Radford House – the former fire station in Effingham Street – is serving as the depot for all the food collected from FareShare and other organisations.

The team is working with Sharon Goodyer from Our Kitchen and other organisations including The Gap in Broadstairs.

GloGen is also working with Orbit housing to deliver food supplies to those in Thanet who need it most.

With Thanet District Council acting as the hub for incoming requests, referrals are sent to GloGen and to Age UK, who are working as a first line response delivering food parcels and meals.

Orbit’s partnership with GloGen church, based at Westwood Industrial Estate, was announced at an event last month.

Cllr Constantine told Cllr Gough: “We are experiencing a fourfold increase in demand and think this is likely to increase further.”

Demands have also increased for Our Kitchen deliveries – which is receiving funding from county councillor Barry Lewis – Thanet Food Link and the food bank at St Austin and St Gregory’s in Margate. 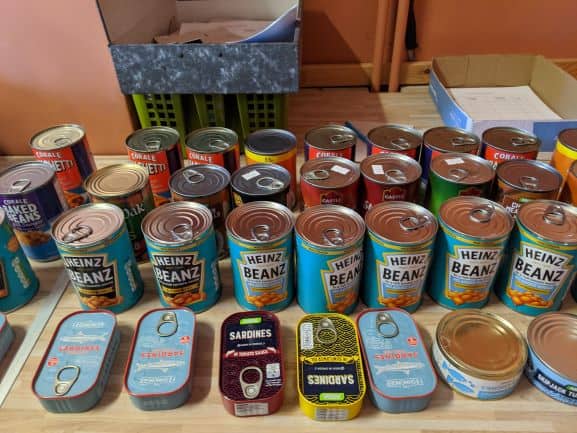 John Finnegan, food bank co-ordinator at St Austin and St Gregory, has launched a fundraiser in an attempt to restock.

He said: “St Austin  &  St Gregory’s Food Parcels Service has been going since 1986. Never in that 34 years has it ever seen anything like what we are facing now.Never has its services been needed as they are now. Back in January of this year we were given out 50/60 food parcels per week. Four months later we are doing that per day and this is costing money three times as much as before. Being a church run charity we rely on donations from the people going to masses but like everywhere else the church is closed.” 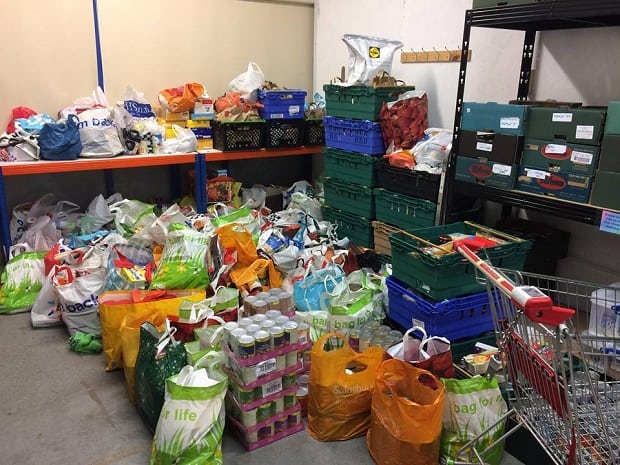 Thanet Food Link also has a fundraiser by member David O’Connor. He said: “People are being very generous during this pandemic but we are running very low on supplies as the need has increased so much. For instance the charity has given out the same amount of parcels in one week as in the whole month of February.”

The food link service operates from St Paul’s Church Cliftonville on Monday, Tuesday and Thursday 10.30am – 12 noon. People need to bring a voucher (now obtainable from St Paul’s Church if you can’t get one elsewhere) to obtain a food parcel and distribution is by minimal personal contact.

An appeal was also made by Ramsgate’s Salvation Army. The organisation is suffering from low stock for the service on Tuesdays and Fridays. Members are also delivering food to those who are self isolating.

The food bank operates from the Salvation Army base at 167 High Street, Ramsgate, on Tuesday and Friday, 10am to noon. After three parcels in a month the service will only then be able to give a basic bag of pasta, soup and baked beans.

KCC’s leader said the authority has gone “over and above” its duty to support vulnerable individuals in the community during the Covid-19 pandemic.

The daily rate in applications has more than doubled to 80, on average, with 920 applications received over the last four weeks, since April 1.

An increase to the £500,000 budget of KSAS is being assessed due to the recent spike in demand during the pandemic crisis. Another £200,000 has been set aside in KCC’s Covid-19 pot which will go directly to local charities.

But, Cllr Constantine described the council leader’s response as “lacking”. She said that the KSAS system was too “bureaucratic” and time-consuming to use.

The Ramsgate member, who will be writing a letter to KCC’s leader, said: “I think it’s incumbent on KCC to find this money. I don’t understand why they can’t as a wealthy organisation.”

KCC’s main opposition leader Cllr Rob Bird (Lib Dem), who represents a division in the borough, added: “I think in Maidstone we are well placed and that’s largely down to the role of members, but also to donations.”