The 43-year-old, who has been a chef since the age of 19, has produced a series of drawings of Margate present and past which he will be displaying along the fences of the disused crazy golf course, next to the Lido car park, for people exercising to view.

The dad-of-one says the art will be spaced so people can stay two metres apart and will be on show from noon to 2pm today (Sunday, April 26).

Julian, best known as Jools, says the pictures should not even exist as he failed all his GCSEs including art and finds sketching incredibly difficult.

Here, in his own words, he tells us what prompted him to create the drawings:

“I came up with the idea of displaying my art along the fences by the promenade because I had just recently finished my last piece (of the harbour arm and Jetty sweep and realised that people cannot see it in it’s true detail with photographs via facebook or Instagram. It needs to be seen up close and in real life.

I was looking out of my flat window at the fences and thought about my early days living in London and riding past the artists displaying their work along the fences of Hyde Park on the Bayswater Road on a Sunday, and the thought came to me, I could display my work al fresco and people could view and enjoy the art and have a little something different and unexpected in their daily exercise.

“Being a chef for the last 24 years, I’ve practiced the culinary arts but not the real arts. I was sitting on the top deck of the Bus Café one Sunday enjoying the best breakfast in town and was looking up at the Arlington tower and the Block Brexit sign displayed in one of the flats, and thought how fun it would be if all the windows had big letters spelling out the local shops and businesses that were on the Margate map. That is where my drawing started. 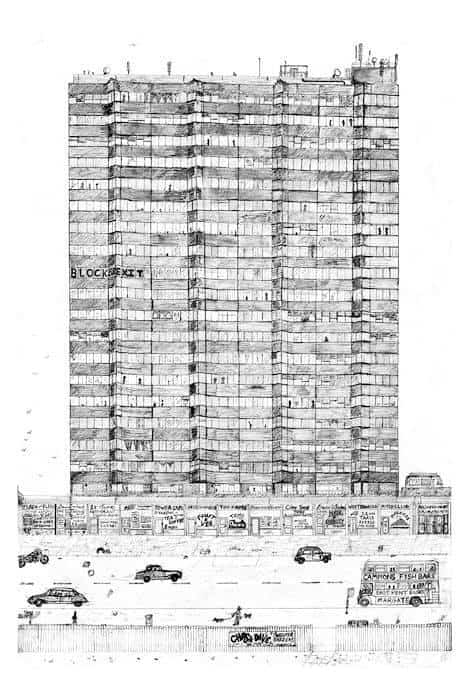 “It took me hours to even lay the foundations of the first Arlington as my brain and my hand don’t really get on when it comes to drawing. Needless to say, the first canvas was a disaster and was covered over in oil paint and sits in the hallway as a good reminder that I can do it if I slow down and put my mind to it.

“I find drawing incredibly difficult. There is a massive block in my brain and hand at times, which makes these drawings something special in their own right to me. They shouldn’t exist. I’m not an artist. But I carried on drawing.

“ I changed my mind about adding the names of the businesses to the windows of the Arlington and instead brought the old shops under the tower back to life. I had the help of many people sharing their memories of the shops via the Cliftonville nostalgia facebook page, even getting contact from the daughter of Molly Francis, who owned the hair salon, to say how much she appreciated me putting her mum’s shop in the drawing! 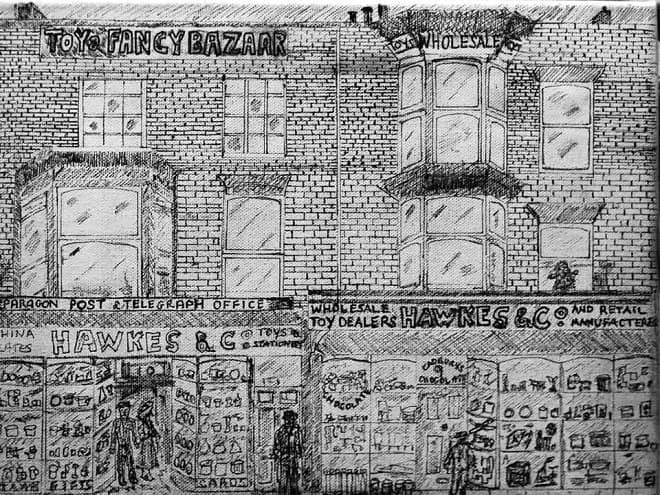 “Bringing the buildings back to life is what I decided to do in my next drawing of the old Hawkes & Co Paragon Fort Post and Telegraph Office. Then I decided to bring the old Cliftonville hotel back to life. It stood on the site of the current bowling alley and Olympia café and was Margate’s rival to the Grand Hotel in Brighton. It was a magnificent building and so sad it was destroyed by fire after being converted into flats. 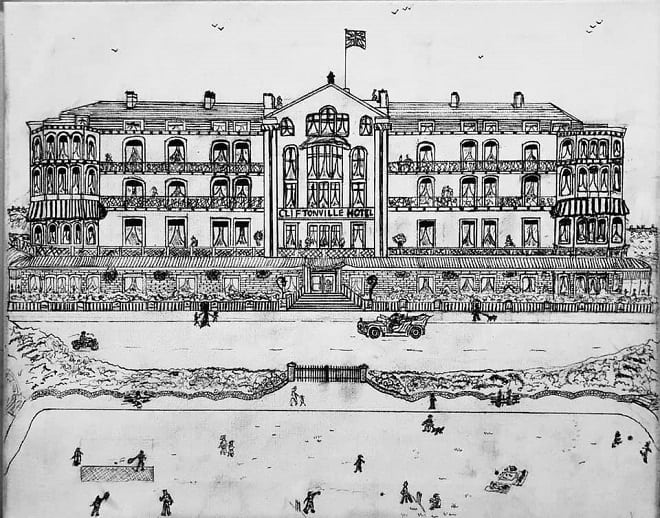 “Since then I have drawn the Margate Clock Tower – which I’ve still not really finished, I think it needs some life and character to be instilled in it yet. 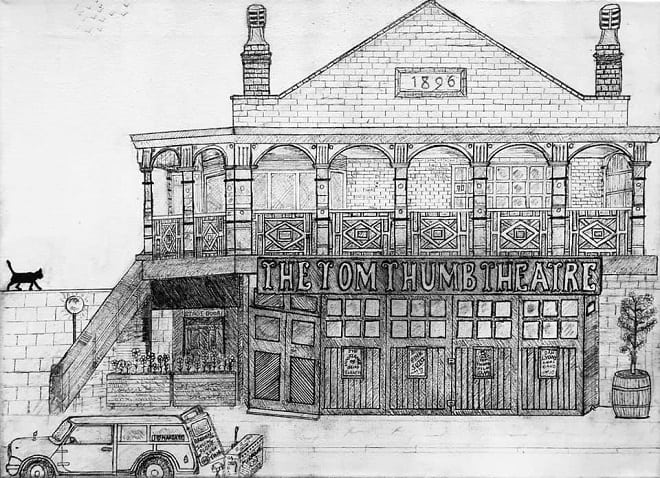 “The Winter Gardens (as it used to be before the 60’s renovations) and Fort Crescent was a treat to draw, however, the angles are all wrong (as with most of my work!) but the character is there.

“I added a tram with advertisement of the Modern Providers logo “Eat More Bread” and the Tom Thumb Theatre along the side and also added the last house on the end of Fort Paragon that used to be there around 1909. 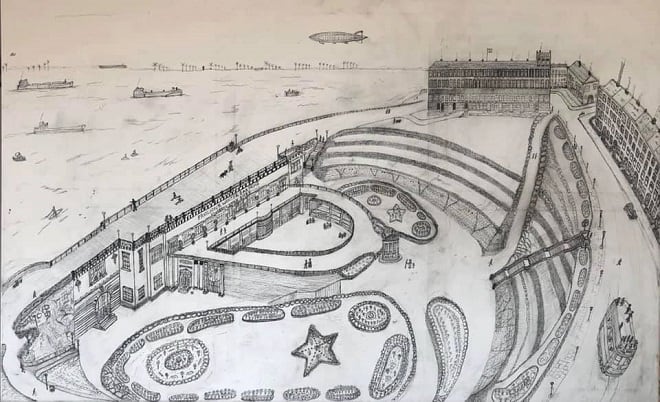 “I wanted to bring the old jetty/pier back to life, and yet keep the modern buildings of  Turner Contemporary, RNLI and Margate Yacht Club, and of course the Turner Way CT9 sign by local artist Chu3d who has mentored me with my art work over the last few months, asking me questions and stretching my imagination to draw differently, which I’m eternally grateful for.

“One day when I was drawing, on the first week of the lockdown, HMS Tyne was anchored just off Margate’s shores and I tweeted them to say hello, They replied to me, and after that we exchanged a series of direct messages and I said I would sketch their ship into my drawing. They were very happy for me to do this; so much so, they asked me for a print of the drawing to be on permanent display upon HMS TYNE. So, when the lock down is over I will be having a print of it done to present to them and hopefully get a tour of the ship too. 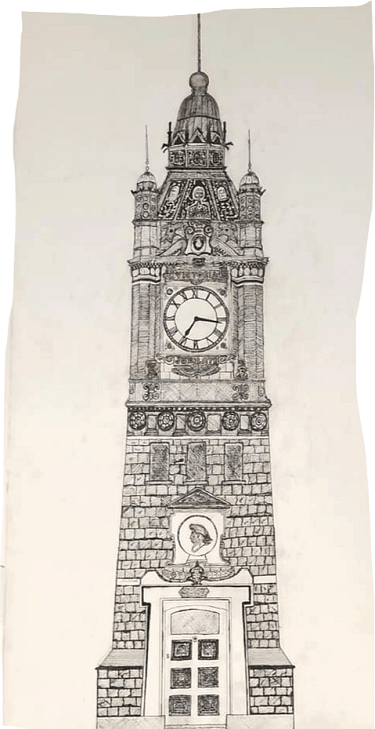 “ I have a few more drawings to do in this series. I am trying to create a walk through of the Margate buildings that once were and still are, starting from the Arlington tower and ending at the Walpole Bay Hotel. It will take me a few more months yet, and maybe some more after that.

“For now I’m happy just to draw and create little worlds within my drawings.”

Jools is happy to create prints if people are interested and can also take commissions.