A Ramsgate couple are stuck in Goa on India’s west coast with barely any food supplies and do not know when repatriation flights will be organised.

Michael Ashley, 73, and wife Pauline, 67, are staying in a rented house near Calangute and Panaji, as they have done for the past 27 years.

But  India went under complete lockdown on March 25 with just a few hours notice as authorities attempted to slow down the spread of coronavirus.

No shops are open and there is a total ban on people leaving their homes.

It is unclear how food is being provided and Michael says the couple are existing on a bit of bread in the morning and whatever vegetables Goan people give them in the evening.

They are also running out of prescription drugs for glaucoma and arthritis and running very low on money. 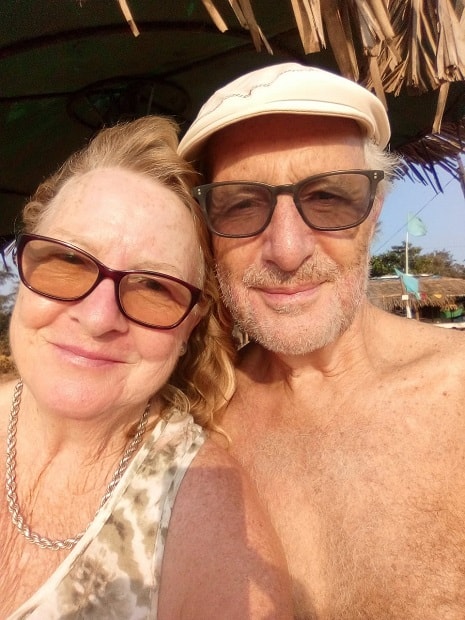 Michael said: “Despite promises, no food shops or markets are open, and the promised local food delivery service was stillborn. We’ve managed to just about get by with help from our landlords downstairs -a couple of chapatis two days running and 6 eggs, and a small sliced white loaf – and from our friends Robin and Helena we had some bread, an onion and a bit of salami

“We have provided our full details to two governments and the facebook group – the convenor of which is in total despair – and I’ve written to my MP, whom I know, who has approached the Foreign Office, but seemingly got a dusty response. We are at a loss of what more to do.

“We just don’t know why the UK government seems to have abandoned the 1000 and more British citizens here, when tourists stuck in Peru seem to have attracted interest,  and at least one other country, Russia, has recently managed to fly a plane load out from Goa.”

The couple were booked to return to Heathrow on April 2 with Oman Air, but the airline has cancelled all flights.

Former Ramsgate resident Bob Simkins, who lives in Goa during the winter, is also stranded.

Bob is a regular at the Broadstairs Folk Week market at Victoria Gardens with his stall selling Indian clothing.

South Thanet MP Craig Mackinlay said: “There are a number of my constituents stuck abroad. The extent of the lockdown in many countries are more extensive than our own, making overland travel to hub airports within those countries extremely difficult, if not illegal under their domestic emergency laws over which we have no control.

“The shutdown of many significant international carriers, notably Emirates has added to the difficulties in getting people home. The suspension of domestic national airlines has removed the ability to travel from smaller airports to the national hubs that are still themselves barely in operation.
“The case of Michael and Pauline Ashley has worried me greatly, and I have, just today, been in touch with the FCO stressing the need for repatriation flights from Goa, a popular smaller Indian state with a high density of British travellers in difficulties. I am assured that the new plan by the government to subsidise existing commercial routes and implement special charter flights will be on stream imminently so I have new hope that we will be able to get Mr and Mrs Ashley home as soon as possible.”

A statement from the Foreign Office says: “Cases of coronavirus (COVID-19) have been confirmed in India. The Indian authorities have introduced a number of measures to limit the spread of the virus. On March 24, Prime Minister Modi announced a three week lockdown across India that requires everyone to stay at home from midnight on  March 25 for 21 days.

“We are working with the Indian authorities and airlines to support British nationals who want to leave India and return to the UK.

“The Foreign and Commonwealth Office (FCO) is advising British nationals against all non-essential international travel at this time.”