In September 2017 Liam Manning’s organs were shutting down and he was being poisoned by his own body.

He had gone into septic shock and needed an urgent operation to remove his colon. He was just 34.

The former Cummins technician had gone to QEQM Hospital in August of that year thinking he would be put back on steroids to help control his Crohn’s disease – an inflammatory bowel condition that he had lived with his entire life.

But Liam was acutely unwell and drugs alone were no longer up to the job of regulating his body.

The Broadstairs dad ended up staying at QEQM for two-and-a-half months and was so ill that his weight plummeted, he had to battle sepsis and he was struggling with crashing mental health due to the medical issues he faced.

He said: “I had had Crohn’s all my life  and it was something I was constantly trying to keep under control. It was when I was 30 that things really started going downhill. I had broken up with my ex and went out enjoying life a bit too much. That meant I was struggling to keep my condition under control. I had immunosuppressants and infusion of biological drugs every eight weeks. When I was 32 I went on steroids but whenever I came off them I would be ill so would be put back on them.

“Last year I found out I have Addison’s disease, which is an adrenal deficiency where my body doesn’t produce enough cortisol. It causes extreme fatigue and I ended up in critical care twice due to my organs shutting down because of it. The adrenal gland  stops working as it does not need to produce cortisol with the steroids. Like any other muscle it just got smaller and smaller. 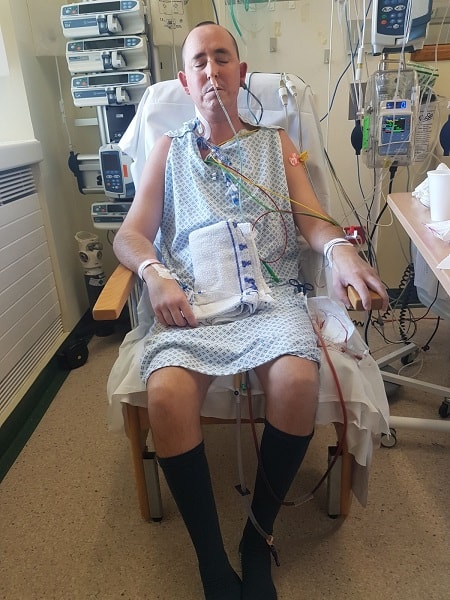 “At the hospital the surgeons told me they would have to operate but I wasn’t well enough so they were going to do it that Christmas. But within two days I got so ill I had gone into septic shock and my body was shutting down and the surgeons said they had to operate, that my large bowel was so infected it was killing me.”

Liam had to have an ileostomy stoma -where a section of bowel is brought out through an opening on the stomach area and bowel movements are collected in a pouch attached to the skin around that stoma.

But recovery was a long and difficult journey for Liam. He said: “They took out 90% of my bowel and formed the stoma. I didn’t think I was coming out of the hospital, I was so ill, my skin and body had broken down, I had six inch holes on my abdomen that were oozing like a horror film.

“I was falling apart mentally.”

Liam was supported by wife Robyn his parents and sister but otherwise cut himself off as he struggled to come to terms with his health and the ileostomy. He left hospital in the November but battled with depression.

He said: “ I thought I had ruined my life and would be fully disabled. I was dealing with the stoma but not accepting it.”

In January last year Liam underwent an operation to remove the remaining bowel and rectum after being referred to University College Hospital in London following more health issues.

Although he began to recover physically Liam says there was a lack of mental health help to cope with his situation.

He said: “I was the man of the house but not working, I had no social life and I wouldn’t go out. My mind took a battering but there was no real help for that. My health had caused a trauma that I needed someone to understand but I didn’t get that mental health support.

“In the end I read some mindfulness books and audio books and  that helped get my mind back in place.”

When Liam started receiving treatment for the Addison’s disease late last year things slowly improved and by January this year the outlook was much brighter.

Liam, now 36, said: “In the last couple of months I have had a spring back in my step and that want for life again.”

He has since taken over a facebook page dedicated to younger ‘ostomates’ and is working to increase the group’s reach and centralise useful information.

Stoma Life East Kent Ostomates aims to reach those from 16 to 100. living with a stoma and those caring for them. The group’s membership includes stoma supply area managers, a Colostomy UK events manager, lead stoma nurses from Margate, Dover and Ashford and at least 1 member from each of the local support meetings across the area.

Liam said: “The aim is to reach as many people that may need our support and a place they can find events and all things Ostomy in East Kent. We are all at various stages of our lives, either living with, or supporting a loved-one with a Stoma. I hope that by creating a regional group all Ostomates (old and new) can be a community in East Kent and use it as a place to find information regarding local support groups and be notified when product supply events, charitable events and, maybe in the future, a once a year county event takes place.

“Many of the existing groups are not necessarily held at work or family friendly times and many younger people like to be on the internet. I’m hoping we can look at a way of doing things that can offer support but is a bit more fun.”

Liam has posters at GP surgeries and hospitals and is also researching whether a volunteer group could be set up to visit stoma wards to offer the mental health support and general advice.

What is Crohn’s disease?

Crohn’s disease is an inflammatory bowel disease (IBD) that causes inflammation of the digestive tract, leading to abdominal pain, severe diarrhea, fatigue, weight loss and malnutrition. The inflammation caused by Crohn’s disease often spreads deep into the layers of affected bowel tissue. Crohn’s disease can be both painful and debilitating, and sometimes may lead to life-threatening complications.There is no known cure.

Addison’s disease, also known as primary adrenal insufficiency or hypoadrenalism, is a rare disorder of the adrenal glands.

The adrenal glands are two small glands that sit on top of the kidneys. They produce two essential hormones: cortisol and aldosterone.

The adrenal gland is damaged in Addison’s disease, so it does not produce enough cortisol or aldosterone.

About 8,400 people in the UK have Addison’s disease. It can affect people of any age, although it’s most common between the ages of 30 and 50. It’s also more common in women than men.

Find out more at Stoma Life East Kent on facebook.