Members of the Aztec Fitness Club have celebrated its 50th anniversary.

Aztec started  in chairperson Sandra Neale’s lounge with approximately six girls. Five of those girls are still members. They meet every Monday evening and gradually grew too big so moved from Sandra’s to the old Methodist church on Margate Road which is now a Jewish church. Over the years the club has met in various places, such as The Ice House in Ramsgate Harbour, St Marks Church Hall Ramsgate and now resides at the Royal Harbour Academy Ramsgate. 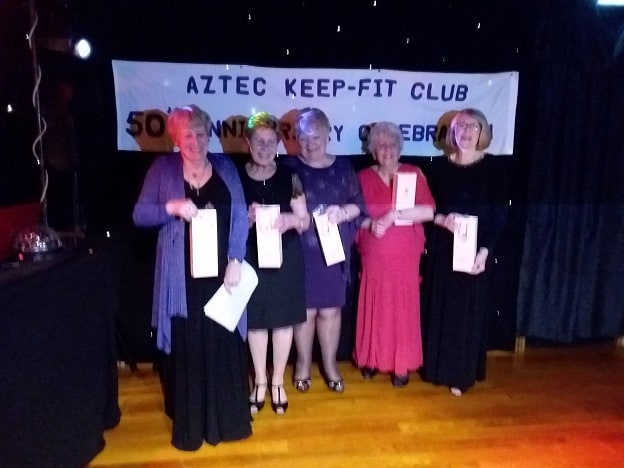 Over the years Aztec has taken part in Ramsgate carnival, given displays at schools and fetes. Every year they donate money to local charities.

On the social side they have every year a treasure walk somewhere in Thanet. They also have bowling nights, Beetle Drives, quiz nights, bonfire nights on Botany Bay beach (not allowed now) dancing nights (Zumba, belly, ballroom etc). They  have regular social activities all year through and an annual dinner and dance.

Club member John Sammonds has continued his “skills” workshops on Thursdays which have proved popular and helpful particularly for those who enter our regular competitions.

In February Clive Tanner had the task of judging prints and digital projected images for the inter-club competition between Deal, Whitstable and our club. A hard fought contest with Whitstable declared the winners.

The KCPA Diamond Jubilee Trophy, held at Ditton, was judged by Leo Rich, who reviewed 272 entries from 34 clubs. Our best entry was “Airobics” by Mike Aubry.

Club secretary Rod Giddins gave a talk about India, showing images of this incredible country, its palaces, people and places.

We were delighted to welcome Roger Hance to the club at the end of February. He gave a “masterclass” showing some exceptional prints and digital images, explaining how and where he had taken them and the equipment he used. Members were truly inspired!

On 2 March the club welcomed Paul Parkinson, an expert on “long exposure” photography, to judge 35 prints in our set subject competition. A very entertaining evening with Paul providing an excellent critique of each long exposure image. Overall winner was Eddie Bradley with his lovely print entitled “The Gymnast of Budva”.*

We meet Mondays at 7.30pm, Ramsgate Football Club, Kent CT11 0AN. Visit us online at www.isleofthanetphotographicsociety.co.uk and on Facebook. 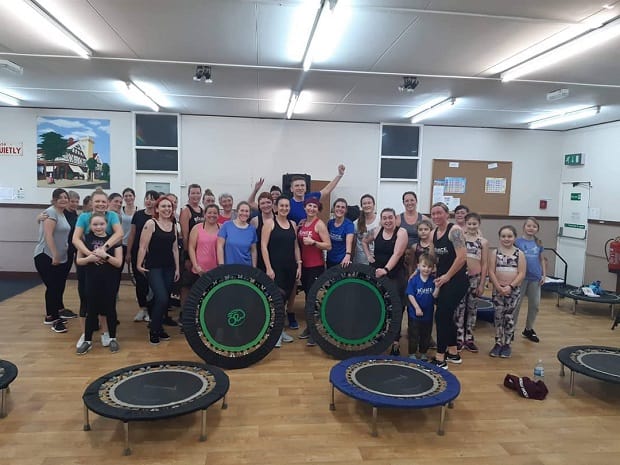 Ray and Karen Mitchell from Bounce Beyond Ltd are holding a fitness fundraiser for local dog rescue Guardian Angels https://guardianangelsdogrescue.co.uk/

Without Guardian Angels we wouldn’t have our wonderful Ernie (pictured). The rescue is run by dedicated volunteers and relies solely on donations, the dogs are fostered and as a last resort held in kennels so you can imagine the rising costs of vet bills, kennel fees food transport etc. 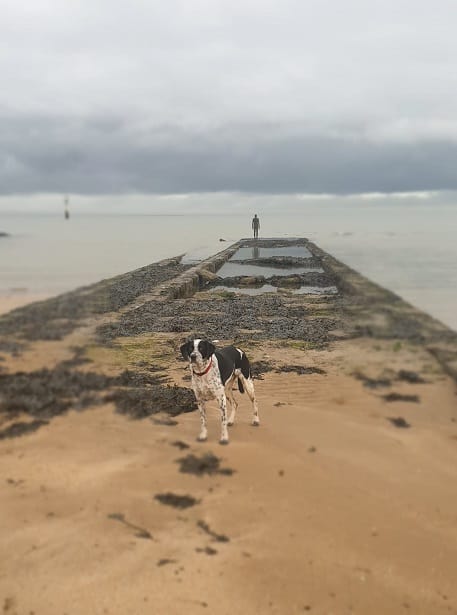 Please come and join us on Saturday, March 14, 1.30pm-3.30pm at Westgate Community Centre Lymington Road, we welcome all abilities, you can even bring the kids!

You will be participating in four different 30 minute classes set over two hours. Bounce Beyond Fit, RockFit with Sarah, Box-Fitness, Barbarian Bootcamp…..Prepare to push your limits and burn some serious calories all in aid of the doggies. 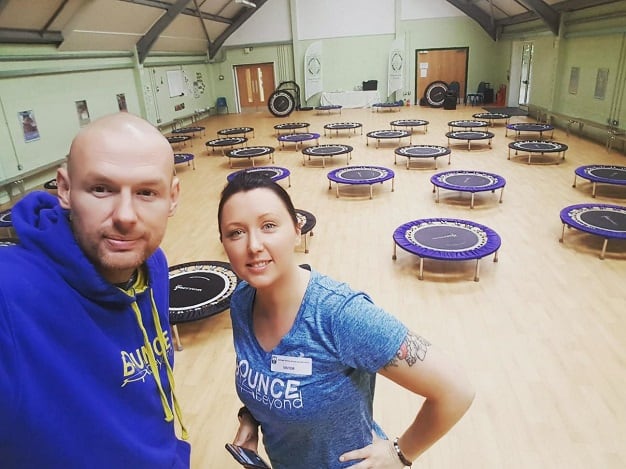 Children are also welcome to participate from 4+

It was with great sorrow that our club learned at the end of February of the sudden demise of one of our more respected members. Mike Barratt O.B.E. spent much of his distinguished career in the British Army rising to the rank of Brigadier.

He was especially associated with the Gurkha of Nepal where he spent much of his service time.  After leaving the military he was their Liaison Officer and also did escort duties at Buckingham Palace at Honours Investitures.  A minutes silence was observed in his memory at the opening of our monthly meeting.

Instead of the usual format of a speaker following lunch, on this occasion we had ten!  They were from the Ramsgate Costumed Walks organisation who do guided tours around our town in the summer, depicting characters from our local history.  Each one, in full costumed character, was introduced by Janet Read, and spent a few minutes describing their life and times, many of them from the Georgian and Victorian era.  Among these were King George,  a soldier from the Napoleonic Wars and a lady  recently released from Newgate prison. These tours take place during July and August, offering fun and and a local historical slant to visitors.

Our coffee morning witnessed yet another instalment in the recollections  of our resident, now reformed hippie, Mike Snooks.  This time he recalled his Greek excursion with his good friend Gary, on a new Lambretta scooter.  The constant lack of cash found them selling the occasional pint of blood and other means to see them through.

They decided to visit Amsterdam where Mick sold the scooter to an American for $20 and somehow got on an American aircraft carrier and enjoyed his  best meal in weeks.   After his return home to see mum, the wanderlust took hold yet again when he decided to return to Spain.

For further information about Probus contact our secretary Brent Rimmington on 01843 589192 or email jandbrimmington@gmail.com

The March meeting was Chaired by Pat Ferrett who welcomed all members to the A.G.M.

The minutes from the February meeting were read, signed and approved.  Mrs Ferrett was delighted to present Margaret Price with a card and gift voucher on behalf of the Guild as a  thank you as she is standing down after many years of being on the committee.

Pat Pigg was welcomed as the newest member of the committee and the Guild now looks forward to another successful year.

There is to be a Snack and Craft day in Canterbury on March 12 and the outing to  Kew Gardens in June is now being arranged. For the April Guild meeting members have been asked to decorate an Easter Egg or Easter Bonnet and to wear something yellow and bright.

The flowers for the afternoon were by Avice Winfield and Jackie Burnell. The speaker was from AGE UK who gave an informative talk about all the services and activities they provide.

Our next meeting will be on the Monday, April 6, at 2.30pm in St. Ethelbert’s Church Hall, Hereson Road Ramsgate. We welcome new members to come and join us.

League of Friends of the QEQM Hospital

The League of Friends of the QEQM Hospital has recently funded the purchase of two tympanometers at a cost of £14,486 for the Hospital’s Audiology Department. They are used to test middle ear problems and help diagnose hearing & balance disorders.

Chief Audiologist Karen Dyer said: “We’re very grateful to the League of Friends. These new devices are innovative, quick, easy to use and portable. Having these up-to-date items of equipment means we can meet the demand for diagnostics in all our clinical rooms resulting in improved access for patients who won’t have to travel to other sites, which in turn prevents delays for treatment & surgery dates.

“They have lovely images to keep occupied children being tested and make tests for people with learning disabilities, dementia & complex needs a better experience for them. Also, they take us into the digital era where they can link with computers across all the Trust’s sites saving the time of consultants and allowing earlier diagnosis.”

TOFFS invite you to join us for an information session and discussion “How to approach your council” on Wednesday, April from 10am to 12.30pm.