Where did it all come from? Rich and Strange, a project from Dan Thompson Studio (Margate) and Company of Makers (Portsmouth), aims to tell the story of the plastic that ends up on our beaches.

Both organisations have been involved in projects about the problem of marine plastics. Dan Thompson has cleaned beaches and collected seaweed in his home town Worthing, as well as organising and supporting beach clean ups since moving to Margate. He created Bucket Box, an ‘honesty box’ of abandoned beach toys at the Bus Cafe, Margate – which has been duplicated across the country. 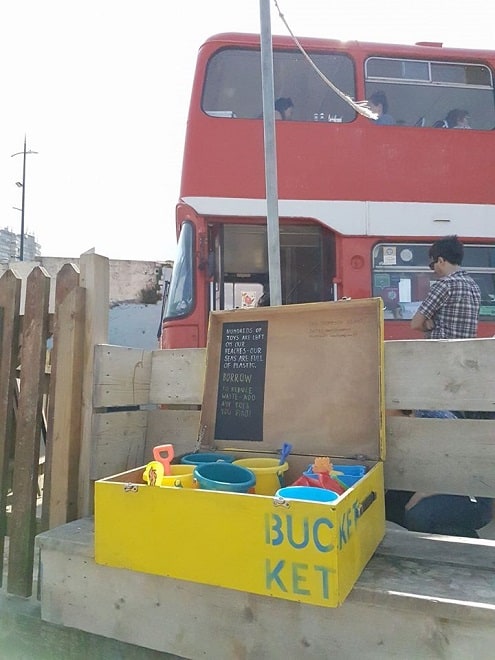 And Company of Makers have been supporting the development of Jetsam, a new app that will change beach clean ups for the better, from their seafront studio in Southsea. It maps plastic found on beaches, to build a database mapping finds against tides and weather to predict future problems.

While most projects just focus on cleaning up the problem, Rich and Strange will look at the more unusual finds and invite creative responses to the objects that have travelled by sea. The project takes its name from a line in Shakespeare’s The Tempest.

Bomford and Thompson will host this month’s First Friday at Marine Studios. They’ll talk about the project and the new app on Friday, March 6, 6.30pm-8.30pm Marine Studios, 17 Albert Terrace, Margate.

They’ll then lead a Beach Walk on Saturday, March 7,  meeting at 11am at the TS Eliot Shelter, Main Sands, Margate with tea at the Bus Cafe afterwards.

Rich and Strange has been supported by a grant from a new fund from the National Lottery Community Fund. The fund, #CelebrateNationalLottery25, will help communities celebrate the impact the National Lottery has had since its launch in November 1994. Thanks to National Lottery players, £40 billion has been raised for good causes so far, funding over half a million (565,000) projects across the UK.