Stop and searches, knife sweeps and the knock-on effects of a dispersal order have brought calm to trouble hotspots in Ramsgate town centre.

The increased police visibility follows an attack on a 27-year-old man in Queen Street by a gang of teenagers on  January 24.

Three boys aged 17, 15 and 14 were arrested on suspicion of violent disorder but later released on bail.

The man, who was kicked, punched and stamped on, suffered injuries including a broken jaw and cheekbone.

Businesses and residents in the Queen Street, York Street and Harbour Street areas say they have been plagued by youngsters intimidating shoppers, fighting, drug dealing and carrying out assaults.

The problems, which date back several years with older teens moving on but being replaced by younger ones, have been targeted numerous times with dispersal orders, a public space prohibition order – which is currently in place – restricted access to free wifi from the town’s KFC and extra patrols.

Last weekend, following the attack, a 48 hour dispersal zone – meaning police could move on people causing a nuisance – was put in place. Prior to that the powers had last been used on December 20-22.

Three years ago The Isle of Thanet News spoke to a resident who had logged hundreds of complaint calls over an 18 month period.

The woman, who asked not to be named for fear of reprisals, is still logging an average two calls a week to police over antisocial behaviour and more serious crimes and has twice reported assaults in progress that she has heard happening outside her property.

She said the change over the last few days has been noticeable but worries whether it will continue.

‘Officers have had a purge’

She said: “It has been very quiet since the police arrived after the assault. Officers have had a purge, there are no street drinkers/drug takers, begging or those particular teens in the area.

“I think that so many people are aware and angry now about the issues that if some of them return to the town people will be calling 101. They are sick of it after nearly six years.

“Most of the 2014 teen gang members are over 18 now and have disappeared but more take their place.

“People will not come into the town unless they know it is safe and the problems of aggressive begging and anti-social behaviour is finally sorted.”

Chris Clemson, who runs Zest café and cocktail bar in Queen Street with partner Tyler Turner, says problems have stemmed from youngsters who believe they are ‘untouchable.’

He said measures to combat the behaviour could begin with removing the street benches where troublemakers often gather.

He said: “Removing the benches from the street would be a good first step. The sad fact is that the youths act like they’re untouchable because they pretty much are. The vast majority of calls, if they’re dealt with at all, are handled by a community support officer whom I assume lacks the power of arrest.

“The result is that the youths primary experience with the police is that no matter what they are doing the worst consequence they can expect is a gentle telling off. Our community support officer does the best he can but without backup he flatly does not have the tools he needs to stop antisocial behaviour.”

Businesses hope the current calm will continue and shoppers will come into the town but previous measures have only seen the peace last for a short while.

The resident said: “The Chief Constable had extra officers for two weeks back in 2013/14. They had a purge on all the street drinkers, which numbered about 15 then, Then they were gone again and within weeks the kids and drinkers had moved back into the town. I am hoping this time it is a sustained effort.”

Ramsgate Town Team and county councillor Karen Constantine are in the process of arranging another trader and police meeting to look at what further measures can be put in place.

Inspector Dan Carter, from Thanet’s Community Safety Unit, said: “We want everyone to be able to enjoy Ramsgate in the evening and we do not underestimate the detrimental impact that anti-social behaviour can have on residents and visitors.

“Following the incident on Friday (January 24), a dispersal order was put in place in the town centre over the weekend, which gave police the power to move on people causing a nuisance and made it an arrestable offence if they returned to the area within 24 hours.

“Our officers continue to carry out regular patrols of Ramsgate to provide a visible presence and deal with anyone they believe may be causing problems.

“We encourage anyone affected by anti-social behaviour anywhere in the district to report it to us so that we can take appropriate action.” 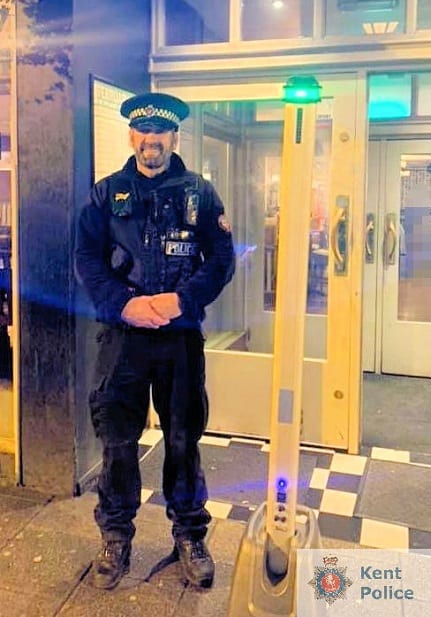 Knife sweeps were carried out on Wednesday and a knife detector was installed outside a pub in Harbour Street on Thursday night.

Stop and searches have also been carried out this week.

Between January and December last year 2454 crimes were recorded in the Central Harbour ward, which includes the town centre.

The most prevalent crimes were violence and sexual offences with 892 incidents recorded. Some 170 of the offences are still under investigation. In 1580 no further action has been taken, 60 offences were dealt with by police, 63 were charged and issued court dates. 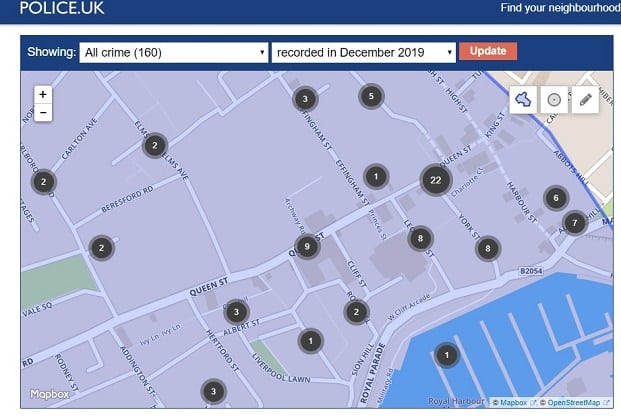 Last year police also carried out a review of pub and off licence licensing, undercover test purchases, work with homelessness and addiction team RISE and a new beat officer was brought in.

Between July 2018 and January 2019 no penalty notices had been issued. Data on how many fixed penalty notices were issued in 2019 under the PSPO has been requested from Thanet council.