The Thanet line-up was bolstered by the return of Nick Herbert, Marius Thompson and Antony Theodosiou to the backs.

Alex Veck started for the first time this season in the second row allowing Andy Letts to return to the back row. Lewis Stone was back at scrum half.

Wanderers kicked off down the slope and weathered an early Gravesend onslaught. On ten minutes the home side produced a fine team try with snappy handing amongst the backs being finished off by a powerful forward drive wide out on the right. 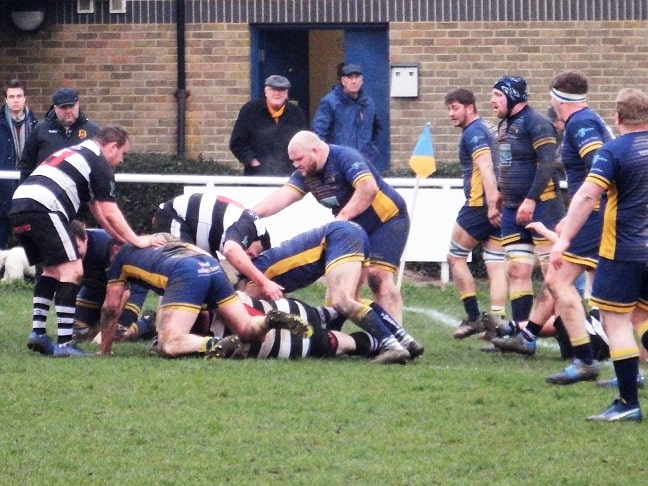 Brett Scott was the scorer of his fifth for the season, Nick Herbert’s conversion attempt slipped by, but Wanderers had the early lead 5-0. The visitors hit back with a fine try of their own six minutes later. A pinpoint accurate cross kick was gathered without breaking stride on the right wing and a finish under the posts gave the visitors a 5-7 lead.

A big tackle from Letts halted a Gravesend move down the narrow side and both second rows Kris Finneran and Veck made good carries. The visitors knocked on with the line at their mercy before Danny Clement was forced off with injury to be replaced by Jon Walker-Smith. Around the half hour mark the visitors had a good five minutes scoring two unconverted tries to lead 5-17. Wanderers finished the half on a high following a superb try from Marius Thompson.  The young full back received near the halfway line and tore past the club house before chipping over a couple of defenders and gathering at speed to touch down. Herbert made an excellent conversion to make the score 12-17 at half time. 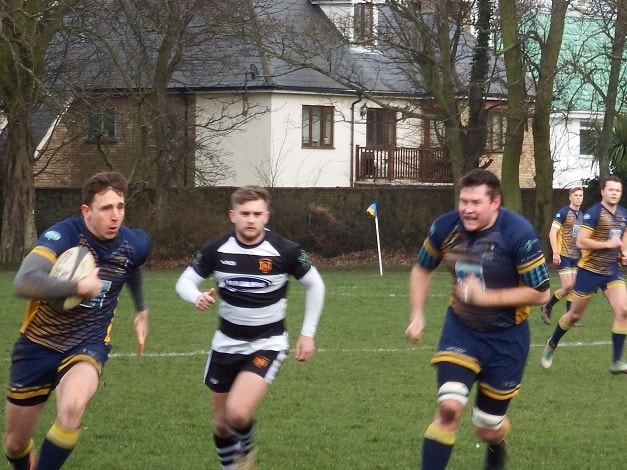 Early in the second period, Chris Hood replaced Kris Finneran who had received a knock.  The first score of the half went to Gravesend with no conversion. An over adventurous attempt to run out of defence then proved costly for Wanderers. The ball was split and the gift was gratefully seized by a visitor who touched down near to posts and with the conversion slotted Thanet were looking at a seventeen point deficit 12-29.

Referee Billy Huntley spotted a retaliation from Cam Pond but was unsighted for the cause of it and the inside centre received a yellow card. Wanderers rallied in adversity and finished the match strongly. Clement returned to the front row with versatile prop Luke Tolley retiring after a well spent hour. Walker-Smith disrupted a breakdown to effect a turnover and Charlie Knight was again dragged down as he threatened to break through.

Soon after solid work from the pack set a good position for Letts to pick up and bustle over for the third try. Clement burst through the visiting defence before the resurgence of the home side was finally rewarded. In the third minute of added time the ball suddenly popped out from a maul and Wanderers scrum half Lewis Stone was quick to react, picking up and dodging round the blind-side, before racing over.  No conversion but with a 22-29 final score Wanderers had both a losing and a try bonus point. 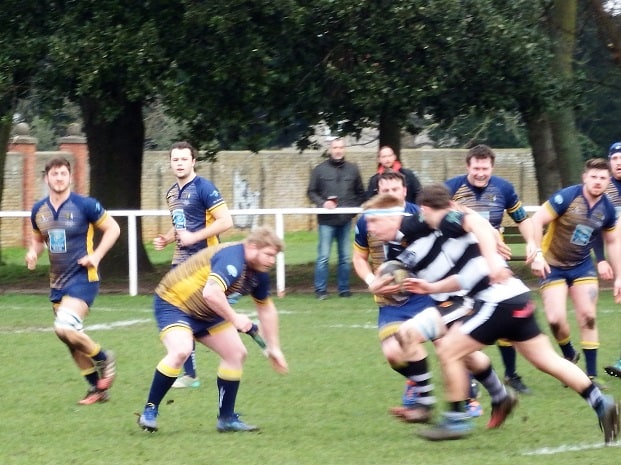 This was a curate’s egg of a performance from Wanderers with some top-quality rugby alongside stuttering periods containing too many poor decisions and errors that created opportunities for their opponents. The experience and example of Brett Scott and skipper Neil Wakefield helped keep Wanderers in contention, but No 8 Andy Letts was the unanimous choice as Wanderers Man of the Match. A performance filled with big carries and tackles plus a try earned him the award.

Next week Wanderers travel to Dover for the latest episode of a local derby that began in the  nineteenth century. Dover are in the relegation zone but only four points behind Thanet who are one place ahead in tenth place. All Wanderers fans are asked to make the short trip to support Thanet in this crucial fixture. Kick off will be at 2.30pm.