The Christmas holidays bring out the best in many of our Thanet residents.

Every year individuals and groups give up their time and/or expertise to make the season a bit more festive for those who may be lonely, in poverty or have nowhere to go.

These are just ten of the random acts of kindness for this year: 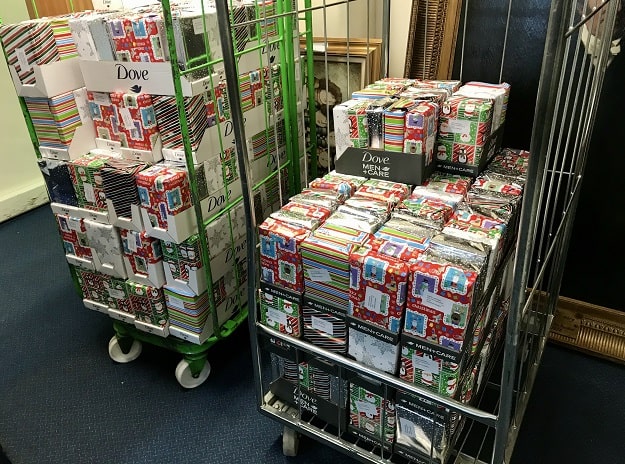 A busy evening was recently spent wrapping 400 gifts, costing over £1,700, which on Christmas Eve members will be going around the wards distributing to the patients unfortunate enough to have to stay in hospital over the festive period.

Chairman Jeremy Voizey said: “We think this is one of the most worthwhile and rewarding things we do.”

More information about the QEQM Hospital League of Friends is available at their page on Facebook.

Ramsgate hairdresser Marcello Marino has got his scissors at the ready to help those in need once again..

Marcello, who has run his business in Ramsgate for a whopping 29 years, is offering free haircuts to those who cannot afford to go to a salon.

The hairdresser, whose salon is based in West Cliff Road, is a well-known personality in the town and even took his skills onto Britain’s Got Talent in 2009. Before his act of one-minute haircuts he told top judge Simon Cowell he could do with a snip.

Marcello has used his skills to raise money for charities such as Thanet Winter Shelter and Oasis Domestic Abuse Service with haircuts by donation at events including Addington Street Fair.

He said: “I normally take a £10 donation for a charity but this time I thought I would do free cuts for people who can’t afford it so they can have some pampering in the salon before Christmas. ”

Marcello says he trust people who are not in need will not take advantage, adding: “If you do not offer, you can’t give and that is all I want to do. I just want to do something for the community.”

Margate restaurant owners Dave and Sarah Carnevale will be serving up free Christmas lunches for the homeless, elderly and anyone in need on December 23.

Donations have been made for the day from individuals and Mr Simms sweetshop in Ramsgate.

The lunch will run from 1pm until 4pm. All donations welcome including food, drink, or cake, warm clothes, dog food  etc.

Children on the Elephant Ward at Great Ormond Street Hospital will receive gifts thanks to the ninth annual toy run in memory of Alfie Gough.

Since he died his parents Sarah and Dean have worked continuously to raise funds to support other children going through complementary therapy at Great Ormond Street Hospital. They also campaign to raise awareness of the disease.

Each year a toy run is made to the hospital to bring some festive fun for families spending Christmas on the ward and donations from amazing Thanet people and businesses make this possible.

This year the run is being sponsored by Macie’s bar and Margate FC Girls Youth. Macie’s bar will be donating all the proceeds from their children’s Christmas party on December 21 to the toy run

The Gap Project, based at the Queen’s Road Baptist Church in Broadstairs, will offer Christmas lunch with all the trimmings on December 20 for those who are homeless. Donations of sweets and warm clothing are being accepted as part of a gift bag they each receive on the day.

The Whitstable Toy Run Association – which has members from across east Kent-  went on their annual motorcycle run to deliver gifts for the patients on the QEQM Hospital children’s ward. Members of the association have been carrying out the annual run for more than 30 years.

A mission to send 100 Christmas shoe boxes to 100 children aged 10 months to 14 years old in Nicaragua has been undertaken by a Margate healthcare recruitment worker.

Max Vernieuwe is determined to bring some Christmas joy to youngsters in the Loma Fria community after spending three months with them as a Rayleigh International volunteer.

The 23-year-old, who has a background in freight and sales, says the experience on the government International Citizen Service changed his life.

Youngsters at schools across the isle have made donations to projects including the Thanet Winter Shelter and Christmas shoebox appeals.

These include Newington Primary in Ramsgate which has collected bags of presents including gifts, toys and personal items, for the Thanet Winter Shelter and the Porchlight project for homelessness.

Hartsdown  head teacher Matt Tate  has launched a fundraising appeal to pay for Christmas hampers full of essentials and gifts for youngsters.

Mr Tate hopes to raise £5,000 to bring Christmas to children who would otherwise face a bleak festive season.

In his appeal he says: “Everyone knows the story Christmas Carol. In the story Tiny Tim was destitute with nothing except the love of his family. What fewer people know is that this is still the reality for many children in the UK today.

“Key areas of Thanet are some of the poorest in the UK and children instead of looking forward to Christmas dread it, knowing that instead of gifts under the tree they will be hungry and cold.

“We want to make a simple difference by putting a Christmas Gift in as many families hands as possible.”

The Clothes/shoes/food helpline facebook page has so many kind offers we can’t list them all but they include offers of toys for those who will struggle to buy their children presents, food for families, Christmas trees and decorations and more.

The page is not specifically for Christmas, offering help to others all year round.