People in 100 places across England, including Margate, are being asked to take part in a new campaign launched by Communities and Local Government Secretary Rt Hon Robert Jenrick MP.

The #MyTown campaign gives people a say in how a new generation of Town Deals, each worth up to £25 million, should transform the place they call home.

It also provides a platform for communities to share their history and ambitions for the town.

The campaign builds on the government’s announcement of 100 places chosen to pioneer multi-million Town Deals as part of the £3.6 billion Towns Fund.

In September Margate was named as one of the areas  invited to develop proposals for regeneration plans and gain the government funding. 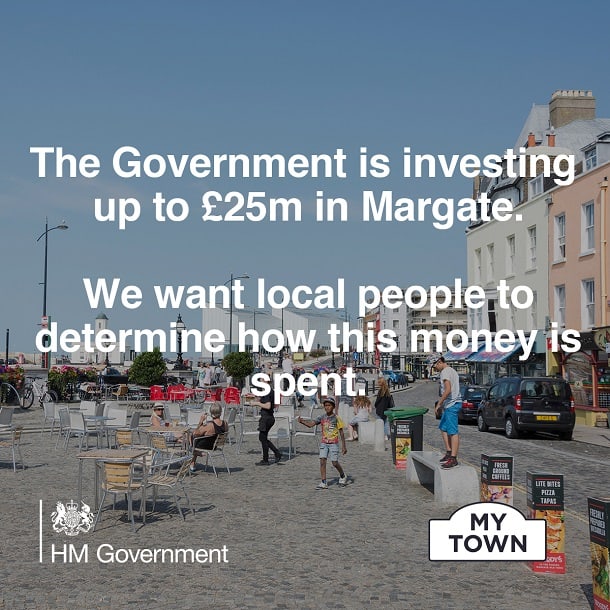 Communities and Local Government Secretary Rt Hon Robert Jenrick MP said: “Too many towns feel neglected by Westminster politicians. This government is committed to levelling up all parts of the country.

“That’s why we’re investing up to £25 million in 100 towns across the country. And I want local people to determine how that money is spent.

Details of support and guidance to the 100 places to kick-start the process for preparing for a Town Deal will be announced shortly. The prospectus will guide towns through the process and set eligibility criteria for funding.

The government is also due to announce details of a competition for further towns beyond the initial 100 to develop plans for their own Town Deals.

The first phase of the #MyTown project is to hear the views on local people on where the money should be spent.

To give your views go to the #MyTown Facebook page at http://bit.ly/TownsSE

Once approved, new Town Deals will aim to improve connectivity, provide social and cultural infrastructure and boost growth. Decisions on funding any proposals will be made in due course.