Your Leisure, which runs venues in Kent including Hartsdown and Ramsgate sports centres, has cut thousands of single use plastic items after being inspired by BBC’s Blue Planet 2.

Indoor Leisure Manager Gavid Vickers set out on a mission to purge  ‘single-use’ plastics from the company’s centres, replacing them with compostable alternatives.

Several months into the project, some 12,500 plastic straws have been eliminated from its catering operation, 40,000 single use cups have been removed and polystyrene food containers and plastic cutlery have also been taken out of circulation.

The company is well on its way to also removing over 100,000 other single-use pieces of plastic in a bid to lessen its footprint on the environment.

Gavid said: “Blue Planet 2 was a catalyst for change. Following the airing of the Plastic Pollution episode, I set out to remove all single-use plastics from the leisure operation; with plastic straws being the first to be banned across the sites. As a business, we have a ‘do it now’ ethos, not waiting any longer to make the changes needed today.”

The anti-plastic project didn’t stop there. Gavid used the straws as an initial step to launch a company-wide environmental mission ‘to zero’ throughout its leisure operations.

Warren Reeves, Your Leisure Operations Manager, said, “After Gavid’s successful purge on plastic straws, it was important for the business to get behind his charge and assess its impact on the environment.

“Buoyed by the positive feedback from our members and local communities, Gavid is now leading the way and has expanded the scope of the project to remove a target of 100,000 items of single-use plastic products from the operation and replace them with sustainable and environmentally friendly alternatives. 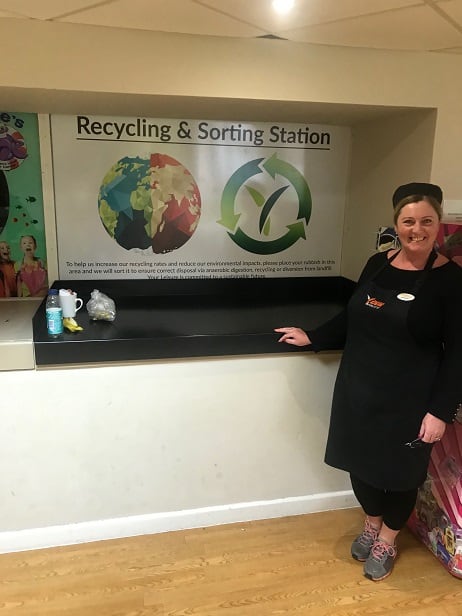 “The company provides leisure services in multiple seaside towns, so it’s vital we do our best to protect the coast for future generations and wildlife.”

Your Leisure’s focus is not to improve its environmental footprint but also placing a focus on education. The Kent-based leisure operator hopes to lead the way; educating staff and members of the local community on how to reduce their ecological footprint while enjoying life and having fun.

Gavid added: ““What is wonderful is that whilst there was initial scepticism from the team due to some of the challenges this initially caused, there is now a real excitement about making our services greener and staff are coming up with new ideas all the time.

“The next stage in our programme is the elimination of plastic from our vending machine provision.”

The scheme will be launched across all Your Leisure sites (Tides, Ramsgate and Hartsdown) at varying degrees of implementation.  The sort station hasn’t been launched at Ramsgate yet but will be shortly and a food recycling service is being secured for Tides.

The World Wildlife Fund for Nature (WWF) estimates that, on current trends, the amount of plastic which the UK is throwing away is set to increase by over a million tonnes by 2030, equivalent to 87,000 more double decker buses worth of plastic waste each year.

Some 2.26 million tonnes of plastic packaging is used in the UK each year. The vast majority is made from new plastic, rather than recycled material. This is because recycled plastic is often more expensive than new plastic, despite its lower environmental impacts.

Plastic hangs around in the environment for hundreds of years. It doesn’t disappear, it just breaks down into tiny pieces that continue to cause pollution.

A new tax will be introduced on plastic packaging by the government from 1 April 2022. Subject to consultation, this will mean that any business that produces or imports plastic packaging that does not contain at least 30% recycled content will have to pay a tax.

The pilot scheme launched at Hartsdown Leisure Centre has led to: