Ramsgate’s Sharon Goodyer and the Thanet Summer Kitchen team have won a prestigious Inspire the House, Best contribution by a Community Group award after being nominated by isle MP Craig Mackinlay.

Craig presented  Our Kitchen On The Isle Of Thanet creator Sharon with the trophy at the Kids Count Inspiration Award ceremony in the House of Commons yesterday (October 14).

Last August the South Thanet MP visited the Summer Kitchen at Drapers Mills School in Margate, attended by many in his constituency.

The Summer-long programme is headed up by Sharon Goodyer, who created Our Kitchen On The Isle Of Thanet, in 2017, and was this year is held at Drapers Mills school in Margate and Dame Janet primary in Ramsgate.

The aim was not just to combat hunger but to bring people together with fun activities and the company of other families during the afternoon and then meals late afternoon/evening. 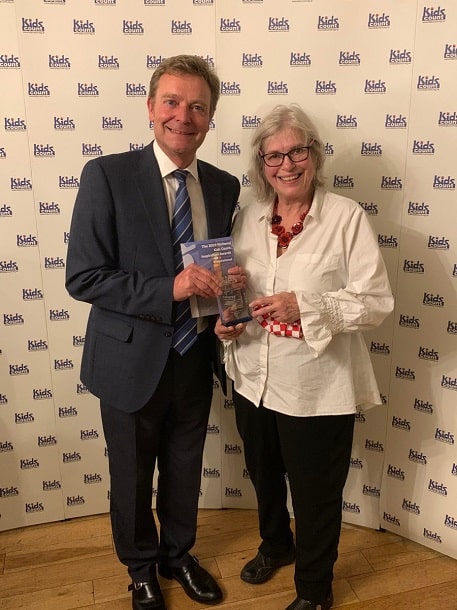 Craig said: “I’m so pleased that my nomination for a Kids Count INSPIRATION Award for Sharon Goodyer and the Summer Kitchen has won joint fitst place in the Best Contribution by a Community Group category.

“This is a thoroughly well-deserved award given how hard Sharon and her fellow volunteers worked on behalf of families in Thanet over the summer.

“Sharon is a true local force of nature. Her formula is simple: that is to get communities together and provide healthy meals made with locally sourced products and to help families learn that good home cooking is simple and need not be expensive.

“I share Sharon’s ambitions to ensure even more local residents can enjoy the benefit of The Summer Kitchen project across more sites in 2020.”

Sharon said she was “delighted and astonished” to get the award, especially as she had not previously known about the nomination!

She added: ““Summer Kitchen opens schools during the summer holidays so the local community can use this asset to provide tastier, healthier meals for everyone. To have this simple but effective idea honoured with a Kids Count Inspiration Award is very special It has given us the confidence to take Summer Kitchen national” We would like to thank Craig for nominating us.

“Isabel, Caroline and I, and all the other volunteers, do not do it for awards. I do it for the sheer fun of it. It is amazing that we at the Summer Kitchen team went to Parliament on the same day as the Queen though!”

The project helped so many families this year, following on from its debut last year, that there are plans to expand in 2020 with even more schools opened up thanks to a pledge from Cpastal Academies Trust chief ecexutive Paul Luxmoore.

Next year’s scheme has been dubbed Summer Kitchen: Unlock Our Schools and will aim to encourage and support community groups to use the facilities their school offers to run a summer kitchen themselves.

The Summer Kitchen project has been supported, and funded, by donations and county councillor grants from barry lewis and Karen Constantine.

Dame Janet there has had an average of 26 people daily

Drapers Mills average has been 75 people a day

Making an average of 1,414 people across both sites during the project

More than 4,000 meals have been served

Plus nearly 600 people fed at the Salvation Army

A cost of approximately £6 a person per day

Giveaway of more than £5,000 worth of vouchers and coupons

Funding from Sainsbury’s still to be totalled

More information about the Summer Kitchen can be found at: www.ourkitchenontheisleofthanet.org.uk.