Actress and Westgate resident Juliette Kaplan, famous for her battleaxe character Pearl in comedy Last of the Summer Wine, has died just days after her 80th birthday.

Juliette was in the show from 1985 to 2010. She also appeared in Eastenders, Brookside and London’s Burning.

The mother-of-three, real name Marlene, was married to Harold Hoser who passed away in 1981. Harold was the brother of one time Thanet councillor Cyril Hoser who in 1983 was jailed for six years for fraud and forgery following a £3million plot where fake dollars and documents were created.

Juliette recently filmed with the BBC in her bid to find out more about her brother-in-law who passed away last year.

Juliette, born in Bournemouth, made her last public appearance when she celebrated her 80th birthday on October 2 by attending a Thanet Astronomy Group meeting at the West Bay Cafe in Westgate.

Juliette had been a member of the astronomy group since its inception six years ago. She was an active supporter of the group and played a great part in its development over the years.

The group decided to honour Juliette’s birthday by presenting her with her own star. 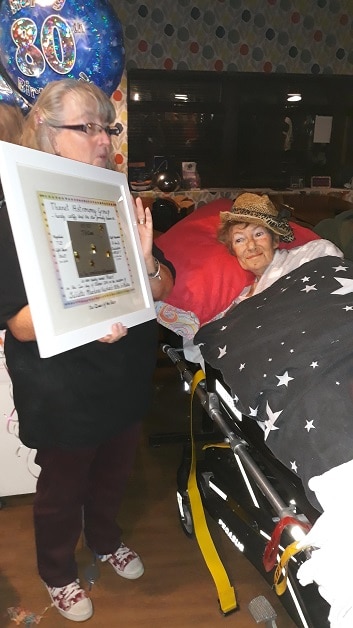 The event was co-organised by Gill Palmer, Secretary of Thanet Astronomy Group, who proudly presented Juliette with the star called “Pearl”, after the character she portrayed for over 20 years.

Formally known as TV Cas (very appropriate for a TV star) the star was renamed “Pearl” and it can be found in the constellation of Cassiopeia, whose character in Greek mythology is famous for being the seated Queen of the Stars. It has a distinct W or M shape depending on its position in the sky at night.

One of Juliette’s greatest Thanet fans made a personalised cake bearing the Star of David to represent Juliette’s Jewish faith and also the word Shalom…meaning “Hello”, “Goodbye” and “Peace.”

The actress had been suffering from cancer. Her agent Bary Langford announced Juliette’s death via social media, thanking people for their support and love.

Juliette Kaplan, “Our Pearl”, has finally succumbed to the cancer she has bravely battled for so long. Thank you everyone who sent their love and support to this fearless and supremely gifted actress. As she said, “Ta-ta and it’s been fun”. #LastOfTheSummerWine #RIP #Pearl pic.twitter.com/bAdTVWckZp

“Her family and friends are all devastated but are relieved that Juliette is finally at peace. However, we now have Juliette’s star “Pearl” to look at when we look at the night sky.”