Little Tina-Lee has a cherished teddy bear, proclaiming her to be the best big sister.

But she was never able to cuddle her little brother, and will never be able to play with him, as Freddie was one of the nine babies every day in the United Kingdom who are stillborn.

Mum Rebekah Lloyd was left with the heart-breaking task of telling her five-year-old daughter that Freddie would not be coming home, and of planning a funeral for a baby who didn’t get to draw his first breath.

Rebekah, 24, who lives in Cliftonville, said: “We told her he was in the sky with other poorly babies.

“We talk about him all the time but I don’t think she understands – she said the other day that he would be starting nursery soon.

“She loves her teddy and we put one in his coffin that said ‘best little brother Freddie’, as well as a teddy that matches one we kept.”

Rebekah’s pregnancy with Freddie was reasonably straight-forward, although medics found she had a low-lying placenta. It was quite different to her experience with Tina-Lee, when she was in and out of hospital with blood pressure problems and ended up having three fits after giving birth to her. 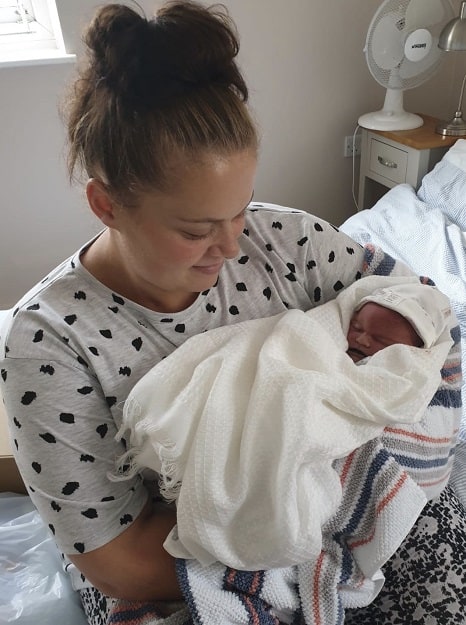 She said: “I didn’t really feel pregnant with Freddie. Everything was normal, all the measurements and tests.

“I went into labour at home and was 8cm dilated when I got to the hospital. And that’s when everything went wrong.”

Staff couldn’t find Freddie’s heartbeat using a Doppler but thought it was because of his position. They tried using an electrode internally but still couldn’t pick up his heartbeat.

Rebekah was taken to theatre but delivered Freddie normally on July 19 this year, and he was born with his umbilical cord knotted and wrapped around his neck six times.

She said: “It didn’t sink in for ages, and I’m not sure it has now. When he was born it felt like it was normal.

“The midwife had seen me four days earlier and everything was fine, so it was so hard to accept what happened.”

Rebekah was moved to the bereavement suite and went home the next day but returned to the hospital every day to spend time with Freddie.

She said: “I didn’t want him to be on his own, so Freddie’s daddy Lee or I were always with him.

“We met the bereavement midwife, Emmeline, who actually delivered Tina-Lee when she was newly qualified.

“She was lovely and really supported us. She helped Lee get Freddie dressed when he came back after his post-mortem and organised a memory box for us.”

Emmeline was able to arrange for the couple to take Freddie home for the night, with a special cooling mat from the hospital.

Rebekah said: “We laid him in his cot and were able to take some photos. It was a very special time but it was so hard to know he couldn’t stay.

“Lee was able to carry him in to the funeral and we have his ashes at home. Tina-Lee likes to sit with him and read to him.

“I’m not sure if I will try and have another baby, because I know I will be so scared that something will go wrong again. But the midwives still text me now to see how I am so I know they will look after me if I do get pregnant again.”