A team of seven took part in the weekend festival of Surf Life Saving sport held at Branksome Chine in Dorset. Competition was fierce with 25 clubs taking part in a variety of events both on the beach and the water, with competitors split into age groups from 30-39 and then groups of five-year intervals upwards.

All the events mimic the real needs of lifeguards working on the beach where split seconds can make the difference between saving a casualty and not. The land-based events opened the proceedings on the soft sand of the beach, making running more energy sapping than usual. In the punishing 1k soft sand run, Broadstairs were off to a flying start with silver medals for Jennifer Scott (30-39), Jonathon Bird (30-39) and Dave Bennett (45-49) with Louise Tomlinson (45-49) achieving a convincing gold. With little rest it was time for the 80m soft sand sprints and further success for the team with individual golds for Louise Tomlinson and Mark Adelsberg (40-44), a silver for Dave Bennett, gold in the male sprint relay (Dave Bennett, Matt Jones and Mark Adelsberg) and a bronze for the ladies team (Louise Tomlinson, Clare Warren and Jenn Scott). Beach events concluded with the beach flags, a 15m sprint from prone position to beat all opponents to a flag and further medals with Louise Tomlinson taking another gold and Mark Adelsberg with a silver.

The water events were held in 1-2 foot of surf and very strong winds. with swim races, board races and surf ski kayak races. Water events start at the beach and head out through the breaking waves, head across the sea beyond the breaking waves and then return to the shore to the finish line.

The swim opened the water competition and brought further success with strong performances for Louise Tomlinson with a silver medal and Jonathon Bird with bronze. Board races were hotly competed and Broadstairs scored good points but were left just outside the medals as was the case with the ski kayaks.

The final water event was the Taplin Relay, a team combination of three disciplines with a ski kayak, a board and a final swim leg – with Broadstairs men (Dave Bennett, Matt Jones, Jonno Bird) coming in third to claim a very pleasing men’s bronze medal.

Despite fielding one of the smaller teams Broadstairs broke into the top half of the medal table in 12th place overall.

Club chairman Dave Bennett, who volunteers for the RNLI lifeguard and Community safety teams, said: “I’m very proud of our small club and the results we have achieved this year with a small team. Every team member who went to the event came home with a medal.

“ Its testament to the training they all put in every week all year round. We do this so that should the need arise we are as well prepared as we can be to save a life – not just reaching a casualty, but being able to give them the rescue or first aid they need.”

The Club also hit the road in Norfolk last month where athletes from  a much smaller team of 5 – two children and three adults – competed against other clubs in the Eastern Region of the UK. This was a great fun event meeting friends with races much shorter compared to Nationals. 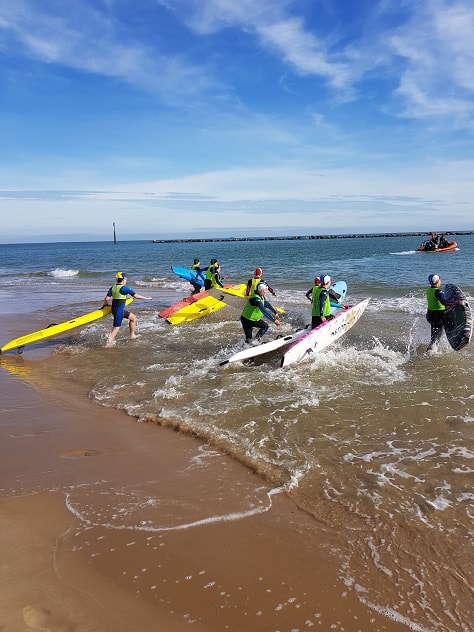 Youngsters Joe gained silver in the Nipper 10-12 beach flags and a creditable fourth in his other races, while Sam took part in swim, board and beach flags event. Dave Bennett and Louise Tomlinson competed in the open age group – against people from ages 18 upwards, as there was no master’s categories. They competed in every race going from beach sprints, run-swim-run, surf ironman (kayak-board-swim), diamond (run-swim-run-board) to name but a few, with Dave just avoiding the beach flags to avoid aggravating his shoulder.

Louise Tomlinson again picked up a good handful of medals including in the adult’s beach flag, and enjoyed her first competitive surf ironman event, despite finding the surf ski kayak events challenging. Dave  was pipped to the winning post in both the surf ironman and surf ski kayak events by a GB endurance kayak squad member 30 years his junior, gaining silver in both events. For the water relay events, a friend from Lowestoft club joined the Broadstairs duo to make up the teams. Gemma Bennett joined in the beach sprint relay, to close the team events for the day.

The club would like to encourage all beach users to learn about how to stay safe near water and at the beach and check out the RNLI’s Respect the Water campaign at https://www.respectthewater.com/ and Beach safety information https://rnli.org/safety/beach-safety/beach-safety-advice.