Find the poets, find the poetry. This year, as Margate Festival lines up with the Turner Prize, poets will be popping up and writing rhymes throughout the town. From bars and cafés to tourist hotspots and public locations, poetry will be weaved into the fabric of Margate for the next four months.

Every poet taking part will be poet-in-residence of Margate Festival for the day and will be placed in a unique venue. The scheme, which last year took place over 17 days, has been expanded and will cover the duration of the festival from September to January next year.

“The idea of Poets-in-Residence appearing around Margate is really interesting,” says writer and The Isle of Thanet News columnist Seb Reilly. “My day as Poet-in-Residence of Margate Festival last year was fascinating, as I found myself inspired by the people around me as much the place I was in and the festival itself. I am very much looking forward to getting involved again this year and seeing what becomes of it.”

The public will be able to find poets at different locations around Margate, with some very visible and others hidden away. The idea of finding the poets and discovering new poetry is central to the concept this year, as a response to the festival theme of ‘Now’. 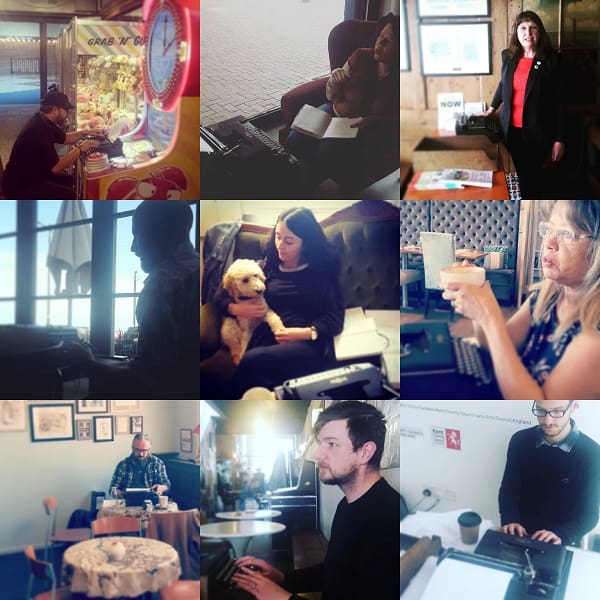 Each poet will spend the day in their location with a 1952 Blue Bird Torpedo typewriter, which they will use to document their surroundings and record their reactions to their environments.

The residencies are run by Whisky & Beards Publishing and Thanet Writers with the Margate Bookie for Margate Festival 2019, and are the brainchild of poet and publisher Connor Sansby.

Connor said: “This is a really exciting time for Margate and I think it’s an amazing chance for the poetry community to showcase itself alongside the other incredible artists in the festival.”

An established poet, Connor Sansby hosts a regular poetry event called Tongue Punch, which takes place at the Tom Thumb Theatre each month. He is Editor-in-Chief of Margate-based micro-publisher Whisky & Beards Publishing, and is also the Poetry Editor for Thanet Writers, a local non-profit publisher and community organisation that supports and pays local writers for their work.

Connor has concentrated on making this year’s residency program bigger and better than before. He said: “There’s a lot happening as the longer festival has made it easier for us to bring even more talent on board. There will be plenty of surprises in store.”

Margate Festival Poets-in-Residence started on Saturday (September 28) with Sam Rapp, the Dyslexic Poet, fresh from performing at the Edinburgh Fringe Festival, in residence at The Curious Cupcake Café in Margate Old Town. As part of her residency that day, Sam hosted a special 100 Thousand Poets for Change event.

The rest of the poets can be found in various locations throughout Margate until January 12. If you spot one, you can take a photo and upload it to social media with the hashtag #margatenow to share your experience. There is also a Facebook Event for those wanting to keep up to date, which can be found here