An antique book discovered at New York fair has been unearthed at a Margate shop.

Misadventures at Margate: A legend of Jarvis’s Jetty, is a morality tale written by prolific Victorian author, Richard Barham Harris who wrote under the pen name, Thomas Ingoldsby.

The vicar, born in Canterbury in 1788,  was a contemporary of Charles Dickens who edited the 1840 periodical of which the Ingoldsby Legends first appeared.

Billy Keefe, whose son Richard runs Old Stable Antiques in New Street, Margate, says it was a pure coincidence the book made it back to the UK.

He said: “About eight years ago we used to do all the antique fairs on the east coast of America. Joe Perkins was an antique dealer based in Boston, Massachusetts but spent his time standing at the big antique fairs up and down the west coast following the sun down as far as Florida. 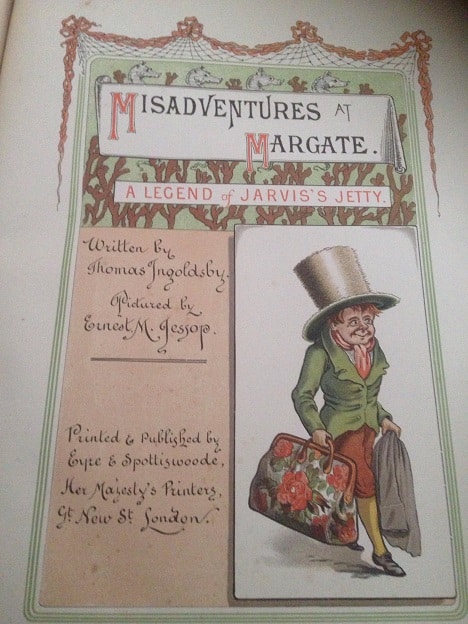 “We used to ship English furniture to the states and Joe became our American agent , looking after our lorry and organising storage, booking fairs etc. It was while he was at a fair in New York City that he came across the book on the adjacent stall. The dealer told him he had purchased it in a shop near to Plymouth Rock where the founding fathers landed.  He gifted it to Richard so that it could be returned to England and we have just found it again.”

The large book written in verse tells the story of a boy found by a gentleman on Jarvis Landing Stage which is described as ‘the glory of the town’,  according to the Pier Trust the Margate Pier Harbour Co. built the wooden jetty in 1824. On November, 4 1851, it was breached by a storm and was eventually replaced. 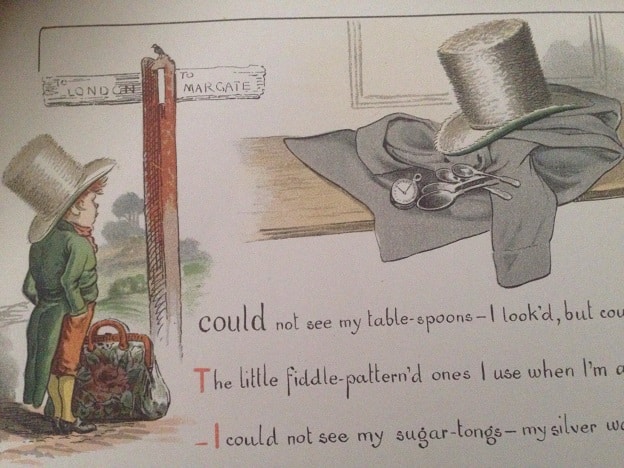 The boy is taken in for food but ends up stealing from his benefactor after he leaves the landlady’s to enjoy a pint of ale.

Morality tales were popular during the Victorian era and the book is thought to have been a later edition reprinted in 1887.

The old jetty is clearly featured in the ornate illustrations alongside the family-run Cobbs’ Brewery. Margate’s famed sea bathing machines are positioned on the beach -indicating their prevalence.

Harris died in 1845 but his collection of books remain popular throughout the era and are still readily available.