A tale of Margate past and present, with a touch of magical time travel and a host of Thanet landmarks and characters, has been published by a former Cliftonville resident.

Sally Tamplin,  writing under her maiden name of Forrester, says Last Train to Margate was inspired by the town’s falling then rising fortunes and a visit to the Madam Popoff vintage shop in King Street.

The 63-year-old lives in Florida with husband Cliff but visits Margate every summer.

The mother-of-two says the recent revival of the town and a chance visit to the vintage shop sparked the seed of the book which was then written over the course of last Summer in an array of cafes and coffee shops such as Ramsgate’s Ship Shape and Margate’s Cup Cake Cafe.

The book, which is a series of connected short stories, tells the tale of Poppy who, at 50, leaves her city life behind to move in with an aunt in Margate. 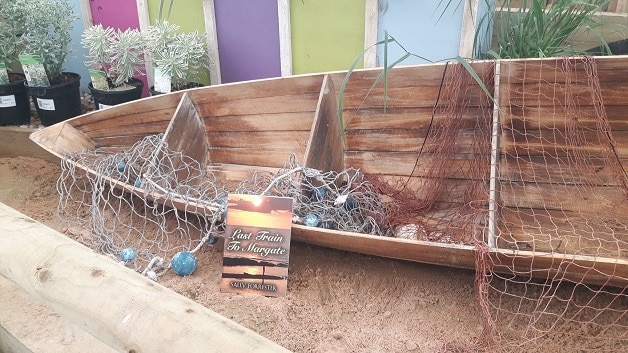 She stumbles across Madam Popoff and takes a job at the shop – which is the starting point for an array of tales travelling back to points in history in the town prompted by the items that come into the Popoff store.

Sally’s research of local history is incorporated into the fictional tale and features events such as Margate’s role in the evacuation of Dunkirk, The Beatles coming to the Winter Gardens, Lady Southborough coming to town to name the new RNLI lifeboat in 1925 and a tale of donkey boys, Lord Avebury and World War One.

Sally said: “I was born in Margate and grew up here until I went to teacher training college when I was 18.

“We lived near the Royal School for Deaf Children, which features in the book, and then moved to Holly Lane.

“We moved to America in 1994 but I come back here every summer and stay with my aunt. We often come back at Christmas too.

“I remember Margate being a holiday town with busy guest houses and hotels, it was a vibrant place and I went to Dreamland to see the By City rollers and Slade.

“But over the years I became distressed as we visited and would see Margate going to the dogs, the guest houses were falling down and the town had taken on a seedy aura, especially when Westwood Cross was built and a lot of trade moved out of the high street.

“In recent years I have been so happy to see how the whole town has taken on a revival with Turner Contemporary, a blot on the landscape but it has brought visitors and artists and people are starting businesses. It has come full circle. Last Summer I was in the Old Town and it was bustling. I went to the Cup Cake Café and then looked in the shops and went into Madam Popoff’s. I was quite taken by the number of people in there. That was my inspiration, to set a story there although my Madam Popoff does not resemble the real one.

“It is about time, and about healing and spiritual wisdom. It explores Margate in different time period so there are a lot of historical truths in the story.”

Sally, who is a homeopath by trade, is two thirds of the way through the second book of the planned trilogy -Ramsgate Calling.

This tale sees Poppy working in a Ramsgate branch of Madam Popoff and will include threads with the Royal Harbour, Vincent van Gogh, Elizabeth Fry, the Italianate Glasshouse and, slightly further afield, the Westgate seaplanes at the Walpole Bay Hotel.

The expected publication date is this Christmas.

The third book will be Broadstairs on my Mind which Sally plans to write when she stays in Thanet next Summer.

The Last Train to Margate is available from bookshops including the Margate Book Shop in the Old Town and on Amazon. It is published by BookLocker.