A crowd staged an impromptu demonstration in Broadstairs last night (August 30) against the proroguing of Parliament.

They were addressed by a number of speakers including Norman Thomas, chair of South Thanet Labour Party. 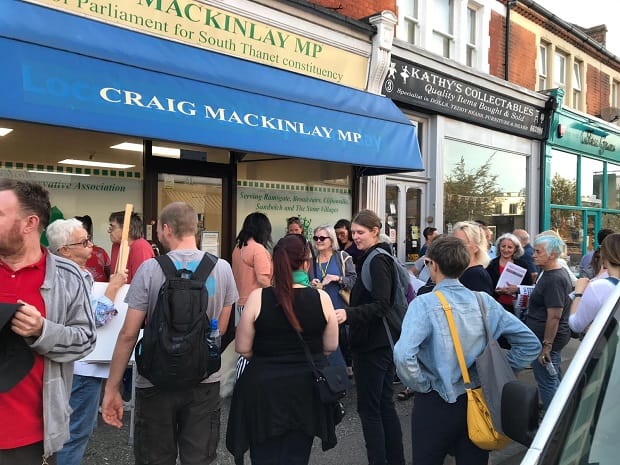 “We want Craig Mackinlay to go to his friend Boris and say don’t prorogue parliament, don’t duck democracy, give us what we really need — a general election.” 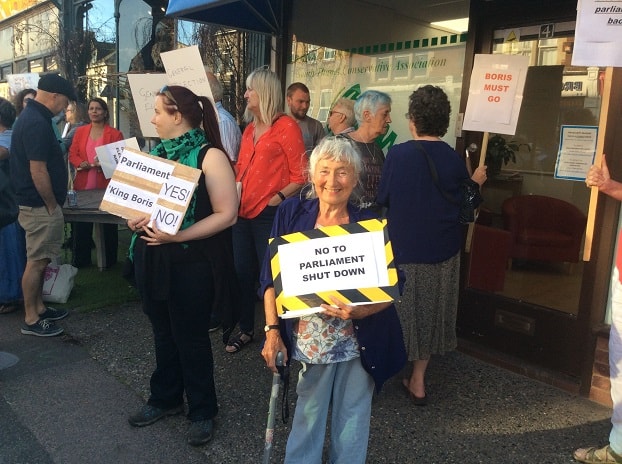 Graham Bash of Broadstairs said “There’s about a hundred people here, and probably a hundred different views on Brexit, but the one thing that unites us is our intention to defend our democratic rights”.

Labour Party Policy Officer for South Thanet Rebecca Gordon Nesbitt echoed this, saying “We’re here because we believe in democracy. I don’t want the people of Thanet to think that we’re trying to block Brexit. Thanet voted resoundingly to leave the European Union, and the Labour Party have always respected the result of the referendum… We want to help restore sovereignty to parliament; suspending parliament is the exact opposite of that. Boris Johnson, who claims to want to restore democracy to parliament is actually taking the power away from the people.” 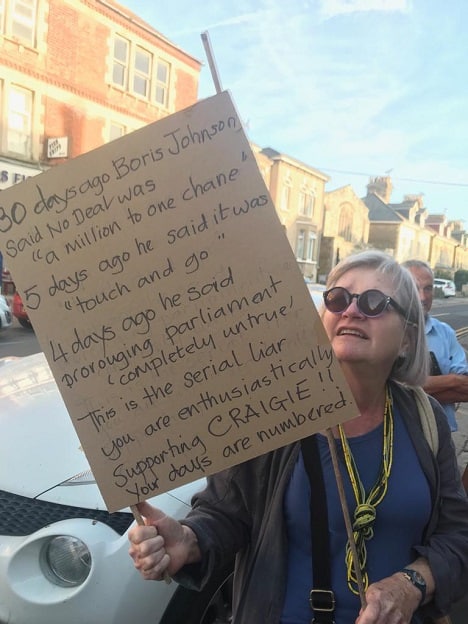 Carly Jeffrey from Ramsgate added “It’s not so much about Brexit, it’s about impending dictatorship. We’re worried about what could happen next if this is allowed to stand.”

County councillor Karen Constantine said: “I will be asking Conservative Leader Paul Carter tough questions on the prorogation of Parliament. This is an act of historical significance, politicians from all parties cannot and should not sit on the sidelines while our democracy is under attack.

“Following the release of a short video I have been contacted by hundreds of Ramsgate residents with their views and concerns.  At the next full council at KCC I shall be putting the following question to the the leader Paul Carter,

“Shutting down Parliament is an undemocratic outrage at such a critical time for our country. This attempt to prevent Parliament sitting and thrashing out a Brexit deal will have a devastating negative impact on South Thanet. Including a devaluing currency, food, medical shortages and gridlock.

“Will the leader Paul Carter write to PM Boris Johnson to express all his residents concerns in the interests of democracy?”

What does prorogation mean?

PM  Boris Johnson has made the decision to prorogue parliament ahead of EU exit day on  October 31. He wants to suspend Parliament for five weeks ahead of a Queen’s Speech on October 14.

The suspension is normal practice for a new prime minister so that government can set out a new legislative agenda but five weeks is much longer than previous breaks of three to seven days.