Extinction Rebellion Thanet will be staging a march around Ramsgate harbour today (August 31).

Demonstrators are assembling at Government Acre, opposite Churchill’s Tavern,now (11.30am),and XR Thanet will march down Royal Parade to the harbour, where its volunteers will block the main road for seven minutes before moving off to the main sands next to the Royal Victoria Pavilion.

Their message is about climate change and its likely impacts on rising sea levels, food production and supply, and on increasingly extreme weather events. Demonstrators say it will be a joyful occasion that involves singing, performance art and a celebration of life.

XR Thanet says the isle currently faces a range of issues, all of which have a serious environmental impact including the decision on reopening Manston airport as a freight hub, the industrialisation of the port of Ramsgate, the lack of coastline resilience planning, live animal exports and inade-quate protections for habitats across the district.

Like the rest of the country, Thanet also faces the wider impacts of climate change, such as more frequent and extreme climate events and the increasing disruption to food supplies. 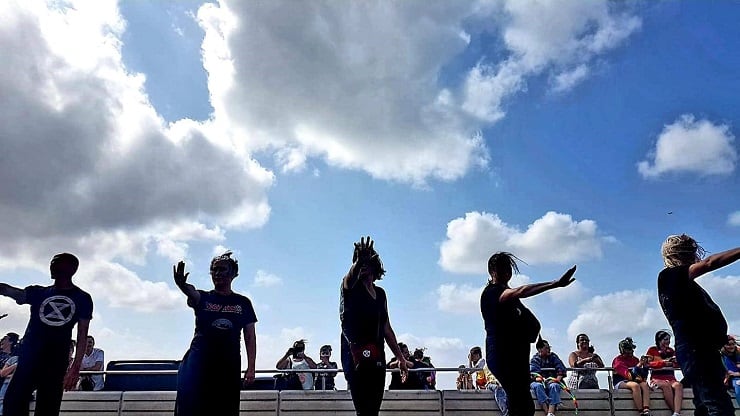 Peter Batt, of XR Thanet, said: “We have our share of issues to contend with here in Thanet and we’re determined to keep up the pressure for change. For instance, the support for reopening Manston airport as a freight hub by our two MPs – Craig MacKinlay and Roger Gale – as well as from councillors on Thanet District Council, is inconsistent with the declared intentions to deal with the climate emergency.

“Aviation is a major contributor to carbon emissions, yet the airport plan is often justified on the grounds of its alleged economic benefits to the local economy and jobs.

“What they don’t seem to consider is that there will be no jobs on a dead planet – no food, no economic growth or prosperity, and no future.

“Business as usual is a slow-motion death sentence. Mass starvation isn’t a great springboard for an economic boom.”

The march follows XR Thanet’s successful involvement in Margate Pride earlier this month and the campaign for Thanet District Council’s climate emergency declaration. The event is due to conclude at around 3pm.