About 14 local fishing boats donated their time and fuel and set off in the morning with excited youngster,s ranging from 4 to 16 years old onboard, all wearing red T shirts donated by Spectrum Vessel Services as well as life jackets. The conditions meant the fish were biting, one boat said they caught more than 120 Bass, although the majority were too small to keep. There were plenty of fish to keep the children’s occupied and happy!

Upon their return the children were all given a goody bag donated by London Array and then enjoyed a barbecue and homemade cakes supplied by local sponsors. This was followed by the prizegiving with the Mayor of Ramsgate Raushan Ara heading up the presentations. 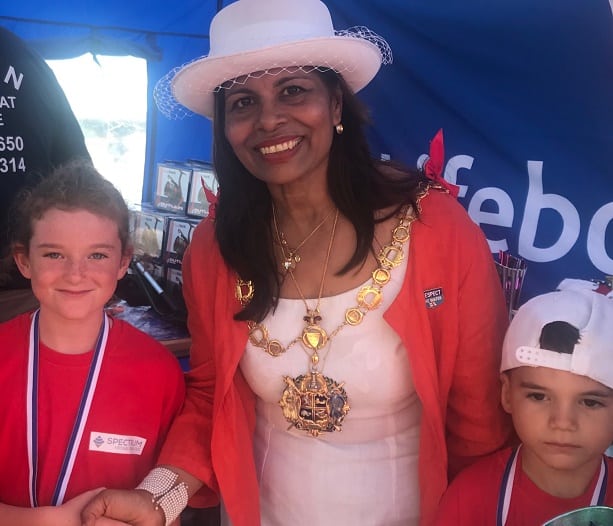 Due to the generosity of local businesses every child who took part was given a rod and fishing reel so they can continue fishing. One parent from last year said  the change in his son has been incredible, from spending all his time playing computer games indoors he is now out fishing with a new group of friends and family.

However in light of tragic, recent events at Sandwich, Harvey Cole, Ramsgate RNLI’s Water Safety Officer, gave a brief talk on the importance of behaving sensibly around water and wearing life jackets.

Volunteer crew member and organiser Jason then called for a minute’s silence to honour little Lucas Dobson, who sadly lost his life last Saturday (August 17). This was an emotional moment as the crew had been involved in the search. 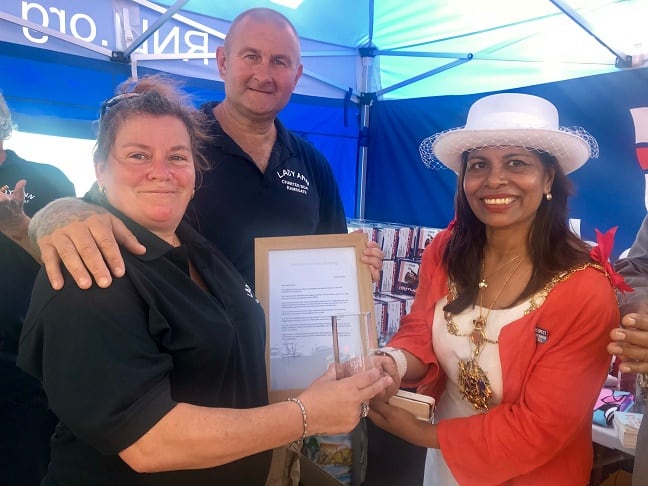 Then it was the turn of the organisers to be honoured, as they were presented by Mayor of Ramsgate Raushan, with an Excellence in Volunteering Award from the National RNLI in recognition of their efforts. Jason and Dawn were completely unaware of the ward.

Everyone in the competition is a winner but the top prizes went to Scarlet Reich and Noah Didds for the most fish caught. The top boat was Pegania from Rye owned by Ant Hills. The Gary Dunk and John Parrott Memorial Trophy for the most amount of sponsorship went to Riley Williams, aged 7, who managed to raise £265 on his own. Well done to everyone!

Final figures are still not in with money from raffles and donations still due but they have already exceeded last year’s amount of £4,500 for Ramsgate RNLI station.

Mayor Raushan said: ” In a seaside town like Ramsgate, it is good to see a number of young people taking part, and engaging in what has long been both an industry and a hobby in Ramsgate.

“My reason for choosing the RNLI as one of my mayoral charities is that we live in a seaside town, and water safety is a very important issue for us all. RNLI is not only a national institution for saving lives at sea, but they are also involved in training people in the community to be water-aware, and to respect just how dangerous it can be.”