Plans for an upstairs cocktail bar, events and yoga space and a specialist seafood restaurant on Viking Bay could be ditched due to a row with the council over beach huts.

Justin Van Oortmerssen and wife Annita Gkioka opened the Funicular Coffeehouse at the site of the former seafront shelter and toilets last year after buying the property at auction for £350,000 the previous October.

It had been owned by Thanet council and was put up for sale as part of the authority’s asset disposal programme.

The pair set about the task of overhauling the site, doing most of the work themselves through Justin’s skills as a carpenter and experience of property renovations.

The boutique coffee house, which also serves Kent wines from Chapel Down and beers, started trading in June 2018 but has been hampered by the 18, mainly disused, huts that are directly in front of the business.

Justin, 39, says there was agreement with the council that if the site was used for a commercial purpose the huts would be moved, half prior to the 2018 summer season and the remainder before this year’s season.

But the huts, which Justin says are mainly unused or under-used and are rotting underneath, remain on site with just two being shifted this month after protracted wrangling between Justin and council officers.

Hut users have disputed this saying they are frequently used and in good condition. Some owners say they have volunteered to move but others say the proposed plans would mean they lose their own view of the sea.

One hut owner also said five beach huts have already been moved up in addition to the two removed from the front of the Funicular and the owner of The Cave shop had given up part of his space to help.

They added: “Everything was measured out. There is not another inch of space for the beach huts to move to.”

An email from the council suggested Justin should pay for the removal and any damage incurred but this was later rescinded.

The result is a small gap that patrons can see through but the rest of the site is still blocked.

Justin says the visual barrier created by the structures is encouraging antisocial behaviour, including people urinating behind them and drug use.

It has also hit takings and he is now taking legal advice over the loss of profits and the lack of fulfilling the original promise Justin says was made by TDC.

He said: “We were promised the huts would be moved and that is why we invested. This has not happened. If we had a view we could probably have doubled our takings and reinvested that back into the business.”
Justin and Annita have permission to convert the upper part of the premises into a flat but say they agreed to drop this idea in favour of further commercial investment comprising the bar, restaurant, a yoga studio and event space which could have been open for next year.

That investment will not take place, says Justin, if the huts are not moved.

He said: “The only way it is worth the further investment is if the beach huts are not in front of us. No-one is going to enjoy a prime seafood dish while staring at the back of a hut.

“After 15 months, we managed to get 2.5  huts moved. We are happy that some movement has happened but the problem has just been shifted to another area in front of our property and now creates a perfect urinal at the end of the row of huts. This is not what was promised to us.

“I was about to submit my planning application for the rest of the property, however, after the recent communication with the council sending me a bill for the beach-hut relocation, I have now ceased that process.

“ It will cost over £20 000 in architects and engineer fees alone, and I am really not encouraged to invest any more in this property.” 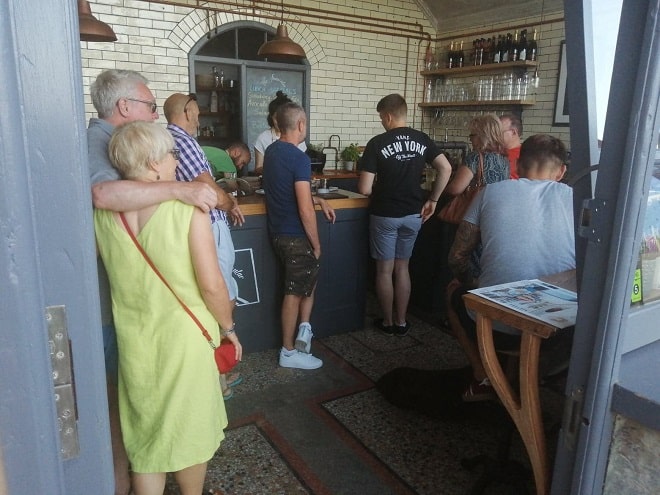 The couple moved to east Kent after Annita took up a Clinical Neuropsychiatry PHD and lecturer placement at Canterbury university. They then spotted the Viking Bay property and moved to Broadstairs specifically for the venture.

Justin said: “We love this place. It has always been my passion to restore and fix things and breathe life back into a property.

“Everything we make goes right back into the property. The investment is not just money but expertise and all the work we have carried out together but we will definitely not carry on if we do not get this decision to move the huts.”

The pair, who employ three people at the Funicular Café, say the huts could be moved along the walkway to the left of their premises.

Justin added: “We have given up our plan to have our flat here so we can create something for tourism, for locals, everyone, proposals that fit in with the council’s town plan policy.”

Justin says his complaints to the council have now been escalated to ‘stage 2’ but he has been told this could be a 20 day process.

He said: “By that time the season will be almost finished.”

A Thanet council spokesman said: “”A small number of beach huts on Viking Bay have been relocated. This took place following discussions with Your Leisure, hut owners and the owner of a business premises in the vicinity.”

According to an email seen by The Isle of Thanet News the council says the property and land at auction was sold ‘with no rights of removal of the beach huts.’

The same email quotes beach hut operator Your Leisure as saying: “There are no other suitable areas at Viking Bay that we can re-position the huts.”