After recently sharing new single “POiiSON”, the artist has now created an animated world for the track with her new video.

The visuals for “POiiSON” were designed by Luke Twyman and feature BABii’s trademark symbols along with fast moving shapes and pulsing colours.

BABii produces forward-thinking electro tinged pop/R&B which features skittering beats and  thick, layered synths with heavy bass with a semi industrial feel to them. The lyrics are dark, yet the vocals are sweet and despite its pop hooks the LP is filled with a sentiment of loss and abandonment.

BABii wowed SXSW this year playing 7 shows in five days and being compared to everyone from Grimes to FKA Twigs.

The inception of BABii’s debut LP came together unintentionally, after a difficult period. She said: “I moved back to my hometown and everything had kind of fallen apart – my band at the time, and all the stuff I was doing. I lost quite a lot of confidence. I kept it on the quiet that I made music and just got a normal job and lived an easy life for a little bit.”

But then that producer Adrian Sherwood asked BABii to come to his studio and make an album and HiiDE was created. BABii later met Iglooghost at a show in Ramsgate and extra support wasoffered in the creation of the record.

HiiDE is about secrets and hiding. BABii said: “When writing it, I was still trying to keep a dying relationship alive, but it was falling apart because of secrets being kept, I was also his secret and there was a lot of things hidden between us.” 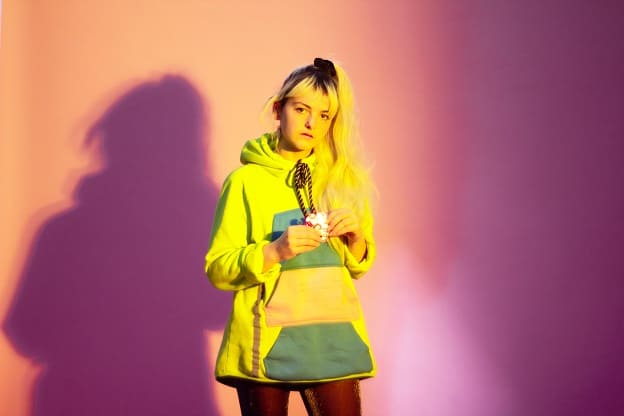 Taking cues from loud and aggressive electronic music, as well as pop music from the likes of JoJo and even the Pocahontas soundtrack, creating HiiDE was a catharsis for BABii, who describes the process of making the album as her way of crying.

She said:  “All of the tracks are fragments of the same theme, and capture the album as a whole.

“It’s such a diverse set of emotions that all bleed into one another, and also reflect each other, and at times can even contradict each other. They only make sense as a whole.”

Hey Margate, you all bang on about supporting local businesses well it doesn't get more local than this. The debut @BABii_mp3 is released today on @deathwaltzrecs and this version is exclusive to us in Thanet. We even held some back as this is pretty much sold out everywhere. pic.twitter.com/OajzVsKyBJ