A multi-faith service at the Salvation Army hall in Ramsgate has marked the official acceptance of office by town mayor Raushan Ara.

A reading was also given by Cllr Ara’s son Raivi who spoke of compassion in all religions and walks of life. 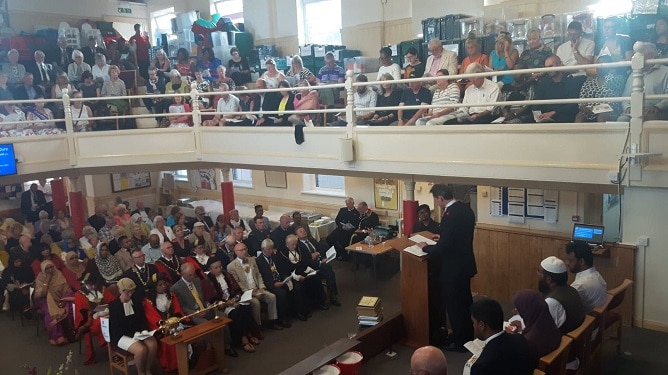 She said: “Volunteering is not a one way street, we do get something out of it. We do it because we enjoy it, we love our community and we love our town.

“Volunteers in Ramsgate are incredible, without (them)  our town would not be as beautiful as it is today.”

The service not only marked the start of office for Cllr Ara but celebrated many of the groups and individuals who give their time to the town.

Certificates of appreciation were awarded, a gift was presented to former mayor Trevor Shonk and flowers given to Cllr Pat Moore and town council staff.

Town Sergeant Mac Wilkinson was also presented with a certificate of appreciation.

There were collection buckets at the event in aid of Thanet Winter Shelter and in excess of £600 was raised.

The mayor will be holding a croquet and cream tea fundraiser on July 25 at Ramsgate Croquet Club, Royal Esplanade, from 2pm to 4pm.

The event will raise funds for the mayor’s chosen charities. Tickets are £15 per person and are available from Ramsgate Town Council at the Custom House or from the Ramsgate Tandoori in Harbour Street.