A double helping of creativity can be found in Broadstairs in the shape of couple Anna and Simon Furman.

The pair, who moved to the town six years ago after some two decades of being regular visitors, are both driving forward print projects – although that is where the similarity ends/

Anna is launching her first novel in print at the Hyper Japan convention at the Olympia in London on  July 12. The venue is particularly apt as novel -Haruka- draws on Anna’s experience of teaching in the Japanese system for a decade.

The English as a Foreign Language (EFL) teacher tells the story of an Englishman who dates a Japanese girl online and subsequently finds himself in emotional turmoil and in trouble with the police.

Anna describes the novel, which has previously been available an e-book, as both a romance and  thriller.

She said: “I have been writing for 30 years with journals, short stories and poetry and the novel is the big one.

“I did a masters degree at Goldsmiths in creative writing and it was during that time that the book began.”

Haruka took four years to complete but Anna is now at work on her second book and this should be out in print by the end of the year – two years since its inception.

She said: “This one is completely different and is about how much you inherit from your parents. It is set in Ramsgate in the present day but with an undercurrent story running from Spain in 1938.

“I am the child of a Spanish father and he lived through the Spanish civil war, so I had that information and had to figure a way to make a fictional novel from it. That is what I have done with Dad, It’s Me.” 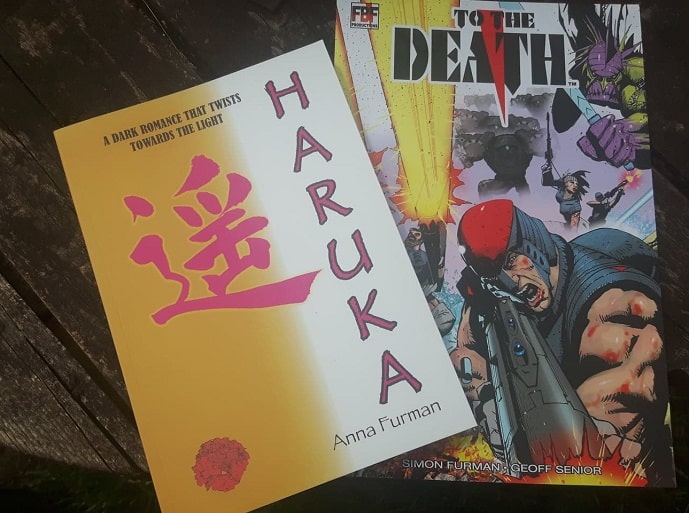 To The Death has been created with artist Geoff Senior and is an independent comic book series drawing on the pairs decades of ex0perience in the industry.

Simon, 58,  is a writer for TV animation, comic books and games, his name is indelibly linked to Transformers, the 80s toy phenomenon. In 2012 he was even inducted into Hasbro’s official Transformers Hall of Fame.

Simon has also been head writer and script supervisor on the hit Nicktoons and CITV show, Matt Hatter Chronicles, and has written for shows such as Beast Wars, Dan Dare, X-Men: Evolution and A.T.O.M., and the upcoming Bear Grylls: Young Adventurer.

In the computer games world, Simon has worked extensively for Space Ape Games on titles such as Transformers: Earth Wars and the Fastlane: Road To Revenge.

He is currently writing The Vigilant, a re-imagination of classic British heroes, for Rebellion and Titan’s Robotech comics and edits Transformers: The Definitive G1 Collection.

His other comic book credits include StarCraft, Alpha Flight, Death’s Head, Doctor Who, Dragon’s Claws, Robocop, She-Hulk, Terminator, Torchwood, How to Train Your Dragon, Kung Fu Panda, Turok: Dinosaur Hunter and What If?

Now he has created the independent To The Death series with Geoff and the pair are dealing with everything from the marketing to the distribution of the glossy comic.

He said: “This was a chance for us to do something of our own. We want to hopefully take it further to games and TV. We did the first, fully digital comic about four years ago and now th second phase has been going into print.

“People still want the old print and paper but this is more high-end and polished, we want to give something that is substantial and value for money.”

To The Death is stocked at Forbidden Planet in London and various regional outlets including Comic and Sci-Fi World in Market Place, Margate.

Simon said: “It is run by Howie who has taken a chance with us as we are not going through the normal mechanisms.”

There are 10 editions with a new one released every four weeks. Simon will also be at the Hyper Japan convention with To The Death.

Find To The Death at www.to-the-death.com

Find out more about Anna at http://www.annafurmanauthor.com/