A mental health summit is being planned in Thanet and will be hosted by Kent County Council and the Sustainability and Transformation Partnership Public Health suicide prevention leads.

The Clinical Commissioning Groups, responsible for local health services, have confirmed the summit will look at the needs and current provision for people in Thanet. The planning for the event is underway and a date soon is due to be agreed.

The summit will be attended by residents, GPs, mental health service providers and third sector groups.

The news comes on the heels of calls for an urgent review of mental health services in Thanet and the creation of an isle crisis cafe following the tragic death of a Westgate dad-of-three.

The body of Ben Stone was found in a wooded area off Tivoli Road last month, just 14 months after younger brother Lee Thrumble was found dead.

Sister Lucy Thrumble said Ben, who was known to friends by the nickname Shine, had desperately tried to get mental health help but had been turned away from The Beacon community mental health centre in Ramsgate because of waiting lists.

He had also tried to get re-admitted to St Martins for the third time via the crisis team but again there was a waiting list.

The tragic outcome has left Ben’s wife, children, siblings, mum, family and friends grieving and opened questions about how many Thanet people are struggling to cope as they try and access mental health services.

In the last year alone there have been at least ten police call outs following the discovery of people who had ended their lives.

A funeral service for Ben will be held tomorrow (July 2) at Thanet Crematorium at 11.30am. This will be followed by a gathering at The Swan in Westgate where Ben was a popular customer. All those who wish to pay their respects are welcome.

County and district councillor Karen Constantine (pictured) has now organised an urgent meeting calling together Thanet’s Clinical Commissioning Group and mental health service representatives, MP Craig Mackinlay, isle support groups and the public to discuss how improvements can be made for accessing support.

Cllr Constantine said: “This is about getting the people commissioning services, those using the services and those who are concerned about the services, face to face.

“I received a huge amount of contact about this from people who are concerned and those who are directly suffering and say they have not been able to access mental health services. We need to know what’s happening with those people.

“This is not about creating unnecessary panic but we need a responsibly held public meeting so this can all be unpacked and put on the table.

“The CCG needs to come up with a robust plan that meets the needs of local residents. MP Craig Mackinlay needs to take a significant part in this and if it is inadequate funding and staffing he needs to ask the questions about that.

The meeting is due to take place on July 19 at the Comfort Inn in Ramsgate from 7pm to 9pm.

Kent and Medway NHS and Social Care Partnership Trust, responsible for mental health services in the region, has already pledged to carry out a review of services following Ben’s death.

Helen Greatorex, Chief Executive for Kent and Medway NHS and Social Care Partnership Trust, said: “We were deeply sorry to learn of Ben’s death. Our sincerest condolences are with Ben’s family and all who loved him.

“We are carefully reviewing Ben’s care and what happened. We will be making sure that any questions that his family might have are included in the review and we will, if they would like us to, share the findings with them.”

In response Lucy said: “Hopefully Ben’s and others sacrifices will help to make a positive difference to those still prisoners to their own minds, struggling daily.” 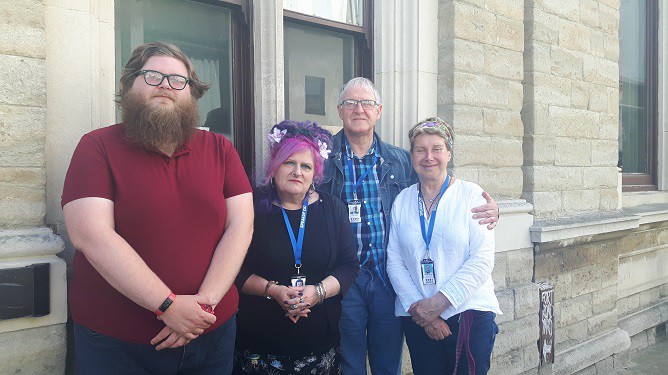 At the end of last year the gaps in provision of mental health services in Thanet and east Kent were highlighted by members of a Margate-based support group.

SpeakUp CIC, which offers peer support and advice for people in Thanet and east Kent living with mental health needs, launched a campaign to gain more funding for vital services.

The group says this year has seen an escalation of people coming to them with serious ill health, suicidal thoughts, self harm and an inability to access help.

Members are now renewing their call for better provision and funding and say a first step needs to be establishing a crisis cafe in Thanet – similar to those already funded in Canterbury and Ashford.

Project worker John Childs said: “There are a lot of people in crisis that we are dealing with, That is growing exponentially with more vulnerable people than ever coming to us.

“The thing about the most recent suicide figures is that they are skewed, they come from the coroner but many deaths are being recorded as misadventure or given a narrative verdict so the figures are really conservative.

“We have been taking part in suicide prevention training but we are not crisis trained.”

Project workers Kay Byatt and Magge Gallant say they are having to try and help people who are ‘seriously ill’ because they have nowhere else to send them.

Kay said: “We just don’t know how many more times people will end up taking their lives and we are not set up to cope with this crisis. We have people literally banging on the door for help at all hours.”

John said a first step would be a Thanet crisis cafe. He said: “There are practical difficulties in the support you would need but these cafes are in Ashford and Canterbury but not Thanet even though all the key social and economic factors for need are here.”

John and fellow member David Rowden say staff at the Beacon had proposed setting up a cafe and space had been offered by St Laurence church but the project fell at the business case stage. Another offer of funding had also come from a Rotary group but again the project did not come to fruition.

They say resources appears to be the issue but insist a weekend cafe outside of ‘office hours’ is desperately needed.

John said: “Responsibility for services cannot be abdicated due to lack of funding.”

In January a tender notice to provide a Mental Health in Local Care service in East Kent was published by NHS Arden and Greater East Midlands Commissioning Support Group.

The aim was to provide services on the ground, such as mental health specialist in GP hubs in a contract worth some £4-£6million.

John, who was part of a steering group looking at the new service proposals, said: “The aim is to help with the ever increasing pressure of workloads on GPs, ensure people get the help needed and deal with people on the frontline, meaning secondary services would not be overloaded.

“We understand this was due to start in July but has been put on hold.”

The successful bidder for the contract, believed to be either the Kent and Medway NHS and Social Care Partnership Trust or Invicta Healthcare, has not yet been announced..

The investment from the Department for Health and Social Care, Public Health England, and NHS England, marked the start of a three year programme worth £25 million.

It forms part of the government’s bid to reduce England’s overall suicide rate by 10 per cent by 2021.

The money was earmarked for

Support for those left behind

Set up by Jackie Bergeron, SOBS – Survivors of Bereavement by Suicide – Thanet, helps other families in the same way that a group helped her after the loss of her son.

The group meets in St John’s Community Centre, Victoria Road, Margate, every last Tuesday in the month from 7.30pm till 9.30pm. The group is independently run but comes under the umbrella of the national SOBS charity. Find SOBS Thanet on facebook

Support is available from trained and experienced staff 24 hours a day, 365 days a year through the Release the Pressure support line Freephone 0800 107 0160.

You can also call the Samaritans on 116 123. To arrange a face-to-face conversation, email jo@samaritans.org or visit www.samaritans.org.

Talking therapy services, either one-to-one or over the phone, are also available in Thanet.