Members of a Margate-based mental health support group say Thanet is in the grip of a crisis due to a lack of government funding for local services.

SpeakUp CIC, which offers peer support and advice for people in Thanet and east Kent living with mental health needs, has launched a campaign to gain more funding for vital services.

The group says Thanet is not getting enough funding despite having the second highest prevalence in the country of people with mental health needs.

Members have now launched a campaign in a bid to get more community services, such as day centres, and to highlight the pressures on professional services such as The Beacon in Ramsgate and access to inpatient provision in Canterbury.

The group says with the budget announcement of at least £2billion extra funding nationwide for new and vital improvements in mental health services, they hope some of this cash will be directed to Thanet and east Kent.

In the budget announcement the Chancellor highlighted an additional investment of £250 million in new crisis services including 24/7 support via NHS 111, children and young people’s crisis teams in every part of the country, comprehensive mental health support in every A&E by 2023/24, more mental health specialist ambulances and more community services such as crisis cafes.

SpeakUp CIC wants to see services such as these, including crisis cafes or day centres, for the isle.

Maggie Gallant, from SpeakUp CIC, said: “SpeakUp CIC is becoming like a crisis service. It feels as though people have stopped caring, or maybe they haven’t got time to care because there are so many people on the books.

“There needs to be more money and it needs to come to the services. We are working really hard to keep people out of hospital but managing mental health can be a struggle and we are all stretched.

“We listen to what our service members want but the group is getting bigger and that’s why more funding is needed.

“We would like to raise awareness of these issues and our concerns. Mental health is still something that is hidden across society at large and despite calls for parity of esteem it still receives only around 10% of the budget.

“We would like to encourage the local clinical commissioning groups, our MPs and the government to put money into local mental health services and better fund the local organisations that are providing front line support to service users.”

Porchlight heads up the Live Well scheme in these areas. The scheme offers a range of services and helplines including employment and housing help, talking therapies and a Road to Recovery programme.

A spokesman for Porchlight said: ““We know that people with mental health issues need to be able to access support in their local communities and that’s why we have increased the funding for services in Thanet.  Porchlight’s Live Well Kent service currently funds 9 mental health and wellbeing organisations in the area, including SpeakUp CIC.

The services we fund are encouraged to work together in a more joined-up way, enabling them to make the greatest possible difference to people’s lives.

“This is because poor mental health can have a knock-on effect on many areas of a person’s life. For example, someone experiencing mental ill health may also need help with re-engaging with the community, finding work and accessing housing support.”

SpeakUp CIC also says some services have been lost over the last decade, including hubs at Margate and Ramsgate, mental health inpatient care in Margate, work projects, Thanet Mind and helplines.

Maggie said: “There is a lack of floating support. We need wellbeing hubs with a community psychiatric nurse to help people in times of crisis, especially late at night or early on a Sunday when other services are not available.”

Members say people are relying on A&E, although it is not always the best setting for someone in crisis, and the police to fill the gap when help is desperately needed.

They say that at a recent meeting with Kent Police they were told calls regarding mental health were up 500% last year. One group member said: “People are screaming for help and they do not know where else to go. It’s scary.”

Amanda Godley, from SpeakUp, added: “What happens if the hospitals review means A&E is moved from Margate? Where will people go if they are desperate?”

Concerns have also been raised about crisis services at The Beacon and access to inpatient care, which is based at St Martin’s in Canterbury.

SpeakUp says The Beacon, at Manston, struggles to cope with demand and GPs are overstretched and underfunded.

Some members say they are unable to get access to inpatient beds and the 9am to 5pm hours at The Beacon leaves them adrift if a crisis occurs outside those times.

They say anyone calling the Crisis Team can wait up to 8 hours for help.

Inpatient  services are looked after by the Kent and Medway NHS Social Care and Partnership Trust.

The trust has a budget of £180million for 2018/19 to provide services across a wide area. These include inpatient care at St Martin’s.

A spokesman said: “The Beacon provides community care for secondary mental health services which are commissioned by the Clinical Commissioning Groups.

“We are currently commissioned to provide 174 inpatient beds, five inpatient wards are based in Canterbury. All KMPT inpatient beds are available for our communities across Kent and Medway for those who need care within a hospital environment, regardless of where they live.”

Kent County Council had a budget of  £16.1 million in 2017/18 for adult mental health care which paid for services such as those commissioned from Porchlight, independence payment plans, day centres and supported accommodation. 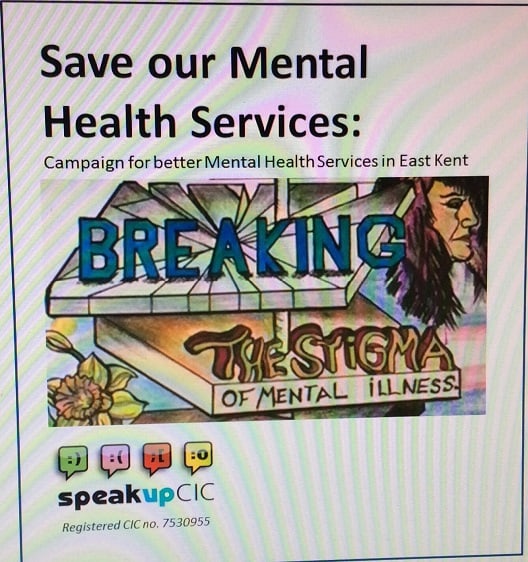 SpeakUp is calling on isle MPs Sir Roger Gale and Craig Mackinlay, Kent’s Director of Public Health Andrew Scott-Clark and the CCGs to highlight the issues and attempt to gain more funding.

The group will also be holding an awareness event in the new year to explain the issue to residents and encourage of organisations to back their campaign.

Maggie added: “ We further call on the Government to act by putting more services and funding into Thanet, an area that feels discriminated against and forgotten by Central Government. Our residents deserve to be offered local services that are on par with the rest of the country. At the least, Thanet needs more support due to the higher prevalence of mental illness.

Travelling out of the area to access services when people are already ill causes further stress, distress and exacerbates mental health conditions. When a service goes the gap widens, putting extra strain on the existing services – many of whom are overstretched and striving to continue whilst fearing further potential funding cuts.” 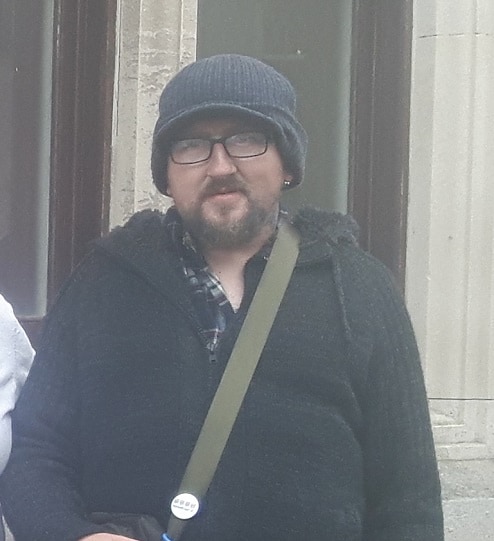 SpeakUp member Adrian was sectioned under s136 of the Mental Health Act, which is often used by Kent Police, after suffering a ‘meltdown’ while at the group.

But he was not taken into hospital.

He said: “I was at SpeakUp and I just lost it. The police were called and I was sectioned. I was taken to hospital in Canterbury and waited about 90 minutes to be seen. But then they said ‘you do not need to be here.’

I had to wait four hours for a taxi to take me home and I was not well at all.

When I lose it I do not know what I am doing or what I am capable of. I can call Crisis but you can wait hours for a call back and anything could happen in that time.

“They are meant to be there for you but I don’t feel as though they were there for me at all. They say it is better to be at home and medicated but sometimes that is not what you need.

“Sometimes it is not about being at home and having medication changed. It is about going to hospital and getting the right treatment.”

One man, who is not a member of SpeakUp and has asked not to be named, says he has lodged a complaint after being told he did not need mental health services at The Beacon despite several suicide attempts and self-harming.

The father, who suffered a heart attack last year, has lost his home and is currently paying to stay in a hotel.

He has suffered childhood sexual, physical and mental abuse, was stabbed as a teenager and has been through the prison system.

He has been involved in drug dealing but says he has spent more than a decade turning his life around and working legitimately.

His counsellor believes him to be suffering PTSD among other mental health issues but he has been deemed as ‘no risk.’

The desperate man said: “I’m currently depressed have been for some time now. I’m battling suicidal thoughts on a daily basis. I was on a depression medication but got told by a doctor at the Beacon to stop.

“I recently had a heart attack and two cardiac arrests. I’m getting no sleep and am climbing the walls trying not to give in to the inner turmoil of just kill yourself.

“I am being portrayed as this criminal a liar, a person who is unable to learn from his mistakes and actions, a person who shows no remorse but I have worked in a list celebrities houses, I’ve refurbished £60 million properties, I’ve worked and refurbished the Goring Hotel, the Berkeley Hotel, Claridge’s Hotel.

“I’m no expert but that doesn’t sound like someone unable to change their criminal ways. Yes, I used to drive around with guns selling crack /heroin and it got to the point where I was on a £600 a day but I turned my life around, I walked away from a life of crime and was a successful carpenter for 12 years.

“Now there is endless misery I go through every day.”

The man was evicted from his home after illness, physical and mental, prevented him from working and he fell behind with his rent. He feels he is being denied help and has made a formal complaint.

His mental health needs have been confirmed by professionals including a Dover Counselling Service counsellor and a member of the Porchlight team.

The man is due to undergo another heart operation and faces an uncertain future over his housing but says he is still not receiving the support he needs.

He added: “I’m afraid I might not be around for much longer.”

A spokesman for the Kent and Medway Partnership Trust said: “We are aware of  (the) complaint which will be fully investigated and the outcomes shared with him.

“Anyone concerned about any aspect of their care should contact our Patient and Liaison Service on 0800 783 9972 (East Kent) or email kmpt.pals.kmpt@nhs.net.”

To access secondary services, like inpatient care, the GP is the normal referral route but people  can be referred by others such as SECAMB, Talking Therapies providers (IAPT) , NHS111 and the police.

People in Thanet can access mental health support in their community from their Community Mental Health Team (CMHT) which provides services to adults of working age aged 18 to 65.

People in crisis can also access their local Crisis Resolution Home Treatment Team (CRHT). Anyone not known to secondary care services but is concerned about their mental health, should contact their local GP who will be able to advise on the best service available.

SpeakUp CIC can be found online here and on facebook here

Talking therapy services, either one-to-one or over the phone, are also available in Thanet despite the withdrawal of ThinkAction from its Margate office last month.

Services are still available through Insight Healthcare by ringing 0300 555 5555 or the Dover Counselling Centre on 01304 204123. They provide face to face sessions at many GP practices and other sites in Margate, Ramsgate, Broadstairs and Birchington.

Current patients of ThinkAction in Thanet will complete their course of treatment. Ring ThinkAction on 0300 012 0012 to find out more.