Margate’s impressive Flatiron building at the bottom end of the High Street could return to its original use of a hotel – with added rooftop restaurant.

A planning application has been submitted to turn Imperial House, which currently houses the Imperial Bar and 12 flats, into a 36 rooms boutique hotel over four floors.

Planning documents from FOB Design say: “Central to the proposal would be a roof-top restaurant, predominantly glazed and set-back from the building’s edge. This would afford unparalleled views over the harbour and close attractions such as Turner Contemporary arts gallery. Moreover, it would provide a distinctive and valued feature in support of Margate’ tourism industry, complementing the regeneration strategy underway throughout the town.

“When the idea was first mooted, there was a dearth of boutique or up-market hotels within either Margate or the nearest towns. Whilst the subsequent opening and success of the nearby Sands Hotel and Angela’s Guest Suites demonstrate a significant level of demand, Margate remains fundamentally under-equipped in catering for the needs and numbers of visitors attracted to the Old Town’s artistic and cultural quarter.

“The business case is reinforced through the fact that existing hotels in the area generally achieve high midweek occupancies, (typically 80% +), through a mix of demand from business visitors, contractors, midweek leisure stays, European tourists and from people visiting friends and relatives. 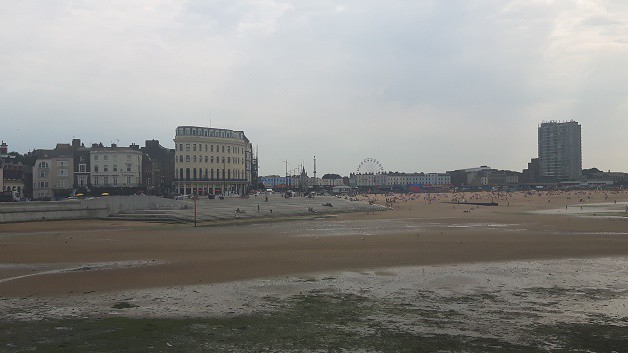 “Occupancies are typically highest between April and October, with many of the budget hotels consistently filling and turning away reasonably significant levels of business on most weekday nights during these months. Weekend occupancies are also strong, especially during the summer months.”

There are no plans for associated parking.

The application states 10 full and 15 part time jobs would be created.

A separate application has also been lodged for the former Bernie’s Chocolate Bar site – housed in the same building. The application requests permission to create a microbrewery. The chocolate cafe closed last August.

A decision is yet to be made on both applications.

Margate’s Imperial House, originally called the Imperial Hotel, was constructed in circa 1881 and is one of the world’s oldest flatiron buildings, predating its more famous and much taller cousin, the Flatiron Building in New York, by over 20 years.

Despite its impressive architecture the building is not listed.

It is said to have been built on the foundations of the Globe Hotel which traded in the 1850s but was fire damaged and then demolished to make way for the Imperial.

It has been home to numerous nightclubs, including the Ace of Clubs, Imps and Bar and was used as the backdrop to a Clarks shoes advertising poster. It now houses the Imperial Lounge, the former Bernie’s Chocolate Bar site and flats.

The building was saved from disrepair by former Summit Aviation owner and Thanet Local Radio chairman Ken Wills. Several radio broadcasts were made from the building and Ken even installed a helipad on the roof but it had to be removed after failing safety certification.