Pupils from Drapers Mills primary in Margate met the Duke and Duchess of Cambridge yesterday (May 7).

The youngsters, along with head of pastoral care and welfare, Scott Wilson, travelled to the Cutty Sark in Greenwich for the launch of The King’s Cup sailing event.

The Drapers Mills group were invited to the event as representatives of charity Place2Be.

Place2Be is a national charity working in over 257 UK schools to improve the confidence and emotional wellbeing of children.

One of those schools is Drapers Mills which has a school project manager who works for the charity. She holds play, creative work and talking sessions  with children whose emotional issues and behaviour negatively effects their ability to thrive in school.

The children, Tya, Sam and Ethan, and Mr Wilson met the Royal party and spoke to Place2Be Royal Patron, the Duchess of Cambridge, about their experience working with charity. They also joined both her and ‘Prince William’ in the sailing simulator.

One of the pupils said: “It was so weird sitting in the boat having a chat with the Prince William, I loved it “

Another added:“ The pressure was on, it’s not every day you have a sailing race with the Duke and Duchess of Cambridge“ 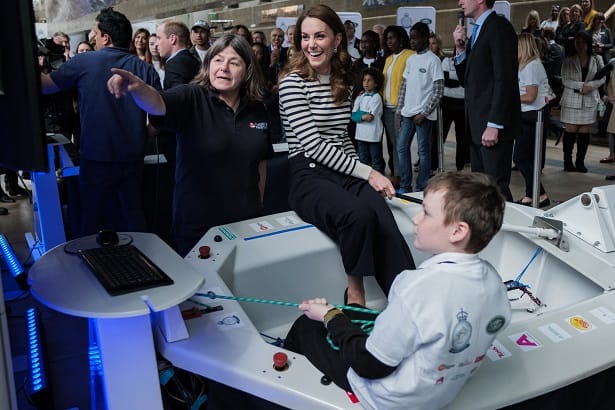 Head teacher Joe Manclark said: “It has been an absolute pleasure to be involved in such a prestigious event and it is one that our children will remember for the rest of their lives.”