Campaign group Save Our NHS in Kent (SONIK) has announced the launch of their crowdfunder and the start of legal proceedings for a Judicial Review  into the decision to close acute stroke units at hospitals including QEQM in favour of a super-unit at Ashford hospital.

SONIK say the move will have a particularly negative impact on the health outcomes of Thanet stroke sufferers. A spokesperson said: “The decision makers haven’t listened to the public, to campaigners or to the councillors that have raised strong objections to the plan. Now we intend to take this to court and make them listen.” 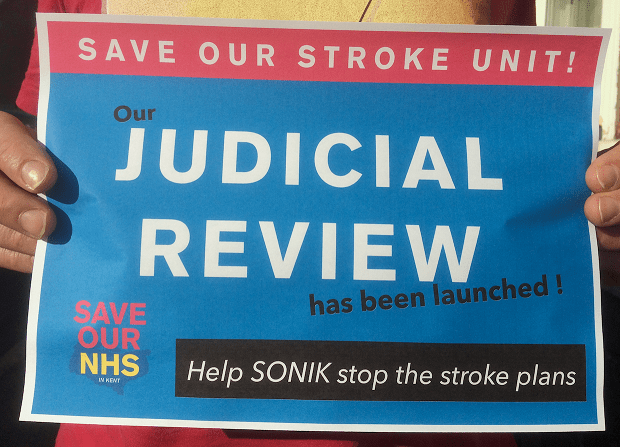 The group has appealed to both Thanet District Council and Kent County Council to contribute an amount to the funds to lessen the burden on the community.

The crowdjustice fundraising page is here and more information can be found on the group’s facebook page.

Acute stroke services are provided in six hospitals across Kent and Medway, including the QEQM, but there are currently no specialist hyper acute units. Kent and Medway stroke consultants say larger, specialist units in other parts of the country have been shown to improve outcomes for people who have had a stroke.

A final decision on the location for three hyper-acute stroke units (HASUs) across Kent & Medway was confirmed by the Joint Committee of Clinical Commissioning Groups (JCCCG) at a meeting in Maidstone on February 14.

The units will be at Darent Valley Hospital, Maidstone Hospital and William Harvey Hospital – meaning the closure of acute services at Margate’s QEQM Hospital as well as at Medway Hospital, Tunbridge Wells Hospital, and Kent & Canterbury Hospital – which has already had its service withdrawn due to the removal of training doctors by Health Education England in March 2017.

SONIK has been campaigning vociferously against the stroke closures since they were announced in January 2018. The group holds bi-weekly street stalls in Thanet and other parts of east Kent where they collect signatures and talk to people about the proposals.

They have made hundreds of enquiries to the Sustainability and Transformation Partnership – the group consisting of NHS organisations in Kent and Medway, Medway Council and Kent County Council -responsible for implementing changes to services.

SONIK say there should be four hyper-acute units rather than the three proposed by the Kent and Medway NHS to ensure reasonable journey times for patients and are campaigning for one of those units to be at the QEQM. 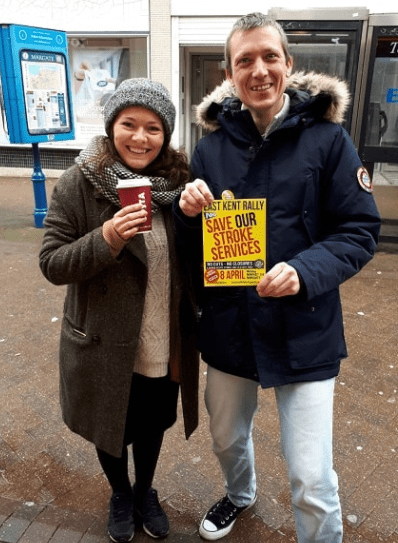 SONIK spokesperson Carly Jeffrey (pictured with a SONIK supporter above) said “We sent our ‘letter before claim’ on April 15 – that was effectively pressing the start button on the whole JR procedure. The legal letter, produced by our solicitors, laid out a very strong case of what we say is the unlawful nature of the decision by the JCCCG.

“The JCCCG are obliged to reply to Leigh Day by April 29. The content of that letter will determine the next steps but will most likely result in filing papers for judicial review. If we are granted a hearing, the court case won’t occur until later in the year or next year. In the meantime, the NHS must not go ahead with the plans and SONIK must raise enough funds to ensure our case makes it to court. We are asking locals to share the crowd justice page widely and donate what they can.”

The group are also still applying pressure to the Kent County Council Health Overview and Scrutiny committee to refer the plans back to government at the next opportunity, which is expected be on May 21.

There are expected to be three different parties seeking a judicial review against the controversial Kent and Medway stroke plans. Two are based in Thanet and the other is Medway Council.

The Thanet Stroke Campaign launched its judicial review fundraiser earlier this month. The dual campaigns have caused some confusion and SONIK says it is looking at collaborative working.

A SONIK spokesperson said: “Our solicitors have invited the law firms representing both Thanet Stroke Campaign and Medway Council to work collaboratively in order to avoid duplication; this will rest on how different or similar the grounds for each case are. Filing one review as a combined whole may be more sensible, or it might be that grounds are sufficiently different that it is sensible to file more than one in order to cover all potential bases.”

National NHS campaign group Keep Our NHS Public has joined the call to back SONIK. 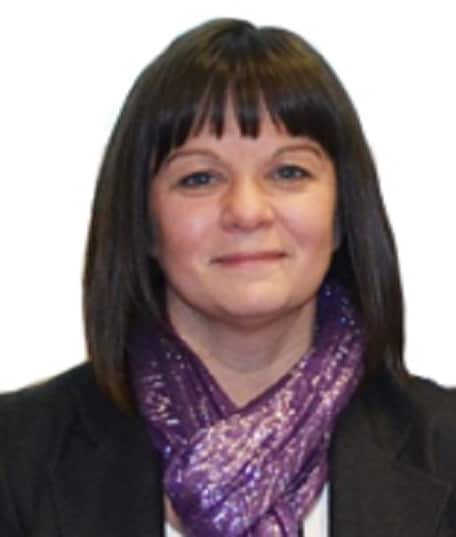 The claim is disputed by SONIK who branded it as ‘brow-beating’ and say there is no relevant evidence to support the claim.

However the STP points to Northumberland which went from three stroke units to one HASU for the whole area in 2015.

A spokesperson said: “Some patients travel over 60 miles to get there – a journey that takes well over an hour. Because the Northumberland HASU has dedicated staff and scanners available 24/7, the time taken to give people clot-busting drugs after arriving at hospital has reduced by over 25 minutes, and over 80% of patients get them within an hour of arriving at hospital.

Ms Jones said: “We will, of course, comply with any requirements that a judicial review or referral to the Secretary of State brings but are aware that this will have an impact on the implementation of the HASUs across Kent and Medway.   Any delay to implementation will inevitably lead to more deaths and more disability than if we are able to go ahead as planned.”