The Thanet Community Forest School invited local families to their site in Margate to join them to find hidden eggs, take part in arts and crafts, toast a marshmallow, plant a tree and sow seeds.

Thanet Community Forest School is a local Community Incorporated Organisation with charitable status, based at Dane Valley Allotments in Margate. The school, based on a 13 acre site, teaches under-privileged youngsters about sustainability, ecology, conservation and the environment within a forest school teaching ethos.  They offer events and sessions throughout the school holidays with the community at the very heart of what they do. 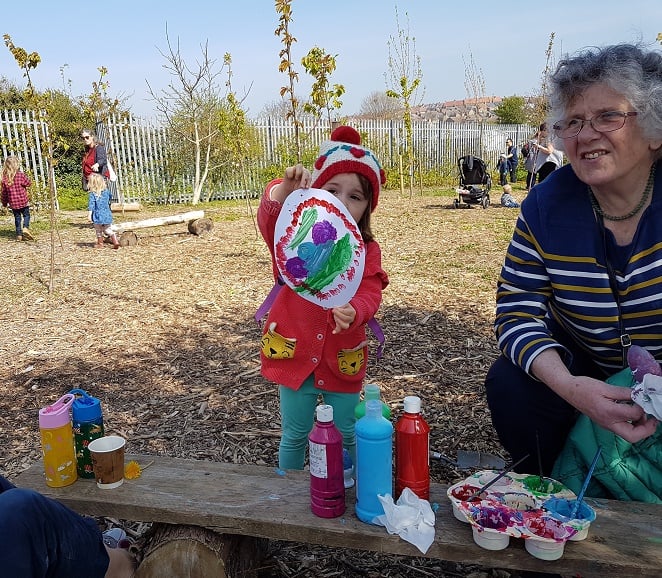 The school recently received a grant of £15,000, over three years, for multi-year core costs, via Kent Community Foundation, from the Albert Burns Children’s Trust Fund.

Debbie and Tania were pleased to reveal that a whopping £1000 had been raised. This was a sterling effort by everyone and they along with Mark were totally amazed by the generosity of those who had contributed.

When Mark decided in February that he wanted to shave his beard off he didn’t just want to shave it off and be done with it, he wanted to do it for it for charity and given that Louie’s Helping Hands is close to friend and landlady Dee Horton, it seemed the obvious choice.

When it all began and the posters were created and the news spread, I’m not sure that even Mark could have expected to see £1000 come in, but as the sponsorship money came in online and the sponsorship form at the pub began to fill up along with the jar, Mark was getting quite chuffed at the amount.

A big thank you to Dee and Steve for hosting the shave event and getting donations for the raffle and of course a big thank you to Mark Cornwell, who without his decision to ditch the beard, this would not have been possible.

The event might be over, but you can still donate to Louie’s Helping hands via the following methods

The day began with a match between teams from Charles Dickens and Royal Harbour schools. Both schools have received coaching from Thanet Wanderers youth development coaches Cary Wright and Tom Carlier and their school coaches Dan Shepperson and Mickey Capeling, both former first team stalwarts at Wanderers.

The coaching and the provision of £6000 equipment and kit is only possible as a result of financial help from the PKS Fund, England and Kent RFUs and sponsors Miles and Barr and London Array. Special shirts in the schools’ colours were presented to the two teams by Simon Thompson of Miles and Barr and John Keohane of the PKS fund. The game was won by the Dickens school and was notable for the quality of play considering many of the players were only introduced to rugby a few months ago. Thanks to Patrick Liddle for refereeing.

Prior to lunch John Keohane reminded a packed clubhouse of the origin of the fund that bears the name of his brother Paul, whose untimely death motivated him and fellow founders, Gary Frame, Jimmy Green and Chris Marson to set it up in Paul’s memory. The main aim is getting local young people more involved in physical activity and rugby in particular.

Cary Wright spoke of his delight in the early success of the schools’ initiative which aimed to deliver funded curriculum rugby to years 7/8 and 9/10 in six non grammar schools whilst also supporting the grammar and independent schools wherever possible.

The success of the programme, after only six months of the planned three years, had far exceeded projections with inter school matches and a very successful schools festival hosted at Thanet Wanderers.

Paul Luxmore, Executive Head of Coastal Academies Trust, thanked Cary Wright and Tom Carlier for their efforts and also the club’s sponsors for enabling the schools and community programme. Dylan Hennesey who had played in the schools’ match for Royal Harbour, then spoke about how being introduced to rugby and then playing the game as a result of the programme had had a positive impact on his life.

Paddy Mcevely, with the assistance of Ross Bell, served an excellent lunch and Kelly Smith and Gerry Doyle with their ever smiling help ensured glasses weren’t empty for long. On the field Thanet Wanderers secured a notable win against Old Colfeians to end their season on a high.

Back in the clubhouse ex Wanderer Prav Mathema who is now National Medical Manager with the Wales RFU and Mattie Stewart who played 34 times for Scotland and 169 times for Northampton Saints and who is a good friend of Cary Wright took part in a question and answer session. Thanks to them for the interesting session.

Chris Marson ably conducted an auction and raised prodigious sums for some superb donated rugby memorabilia and auction lots. Thanks to those who donated and bought these wonderful items.

John Keohane has announced that around an amazing £11,000 was raised during the afternoon.

The Rotary Club of Margate Thanet Schools Young Artist Competition started in 2010  and is now established in the school diary as the place for the schools to exhibit their artistic talent.

This year there were youngsters from 43 schools and colleges in Thanet taking part and more than 700 paintings.

The exhibition will be on display in Sainsbury’s Westwood from April 22-28. 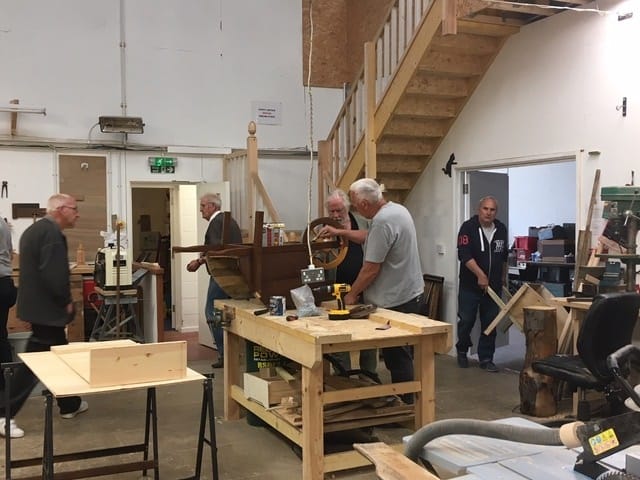 Join us for an afternoon of fun, chat, sausages and celebration for our fifth birthday.

It’s been quite a journey over the last 5 years, from our small beginnings in Pierremont Park, to our wonderful workshop here in St Peter’s.

We wouldn’t have made it without the love, support, hard work and effort of the whole community so please come and help us celebrate this wonderful place that we call the Shed!

On street parking is available on Northdown Road and Westover Road or the Loop stops just by the Cabin Cafe and it’s a short walk to The Shed.

So we know how many sausages to sizzle, please let Debbie know if you can make it debbie@broadstairstownshed.org.uk

Do you fancy giving Pétanque a go?
Friends of Charlottes Court are looking for new players. They meet on a Tuesday evening at 7pm
If you can’t make Tuesdays The Friends of Ellington Park play in the same area on a Thursday at 7pm. 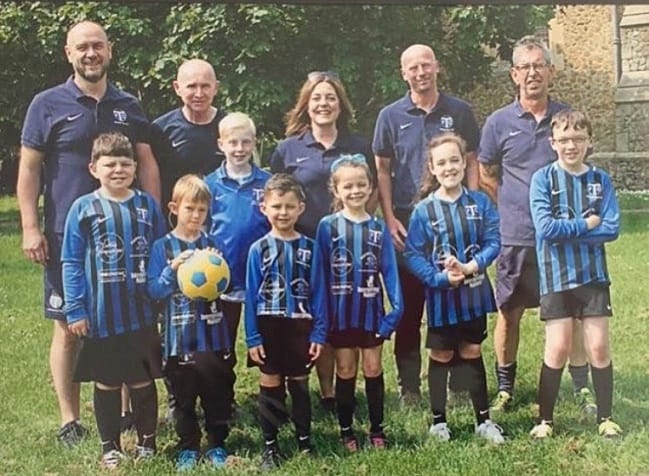 The club set up a children’s deaf team in January 2018 for deaf and hearing impaired primary aged children from across Kent.

Tankerton FC is the only grassroots football club within the county which has a team specifically for deaf and hearing impaired children. All children aged between 5-11 participate in fun football sessions put on by FA qualified coaches. As well as learning basic football skills through fun interactive drills and mini games the opportunity to be part of an all inclusive club has boosted the children’s confidence within a social environment as well as getting fitter and healthier.

Tankerton FC set up the team as every child should be given the opportunity to join in sport.

The fortnightly sessions provide a network for parents and carers too who can have a cuppa while they watch the children having so much fun. Providing support to their families is important too.  TFC are campaigning constantly to raise deaf awareness and promote the team, but would welcome more community support by helping us spread the word and let everyone know that Tankerton FC have this team and want to reach out to more children.

One mum said: “As a mother of a deaf child, I am grateful to Tankerton FC for setting up and running a deaf children’s football club. It means my son has been able to play football with other deaf children, under the supervision of deaf-friendly coaches. With his own football kit, he feels part of a larger football club too. Football is important for self-confidence and exercise, but sometimes a deaf child can struggle to follow the rules. My son is the only deaf child in his school, so this team is a great way to meet other deaf children, while learning key skills and having fun. It has given him the confidence to join in games with his friends in the playground too.

“For the parents, the club is an opportunity for us mums and dads of deaf children to meet and chat too. It can sometimes feel like you’re the only parent of a deaf child, so it’s great to have somewhere informal to meet up and know you’re not!

“My son Toby loves being part of Tankerton FC’s deaf children’s team. It’s been fantastic for his self esteem and has helped him make friends with other deaf children. We would really love to welcome more deaf children into the club so that they can join in the fun too.”

More details can be found on our club website www.tankertonfc.co.uk or by contacting Liz Flaxman (07913 152843), or via tfcdeafteam@gmail.com