A final decision on the location for three hyper-acute stroke  units (HASUs) across Kent & Medway has been confirmed by the Joint Committee of Clinical Commissioning Groups (JCCCG) at the meeting in Maidstone today (February 14).

The units will be at Darent Valley Hospital, Maidstone Hospital and William Harvey Hospital – meaning the closure of acute services at Margate’s QEQM Hospital as well as at Medway Hospital, Tunbridge Wells Hospital, and Kent & Canterbury Hospital – which has already had its service withdrawn due to the removal of training doctors by Health Education England in March 2017 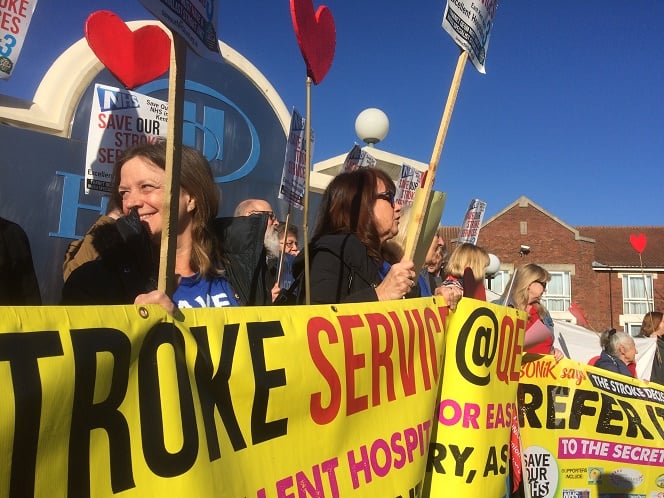 The decision comes despite a sustained campaign for more than a year by Save Our NHS in Kent, isle county councillors and many members of the public.

SONiK has been fighting for a fourth HASU at QEQM and is now urging members of the Kent County Council’s health scrutiny committee to vote to refer the plan back to government when they discuss it again on March 1.

Plans for going live -and the costs

The JCCCG expects the hyper-acute units at Darent Valley and Maidstone to go live in March 2020 followed by the William Harvey Hospital in spring 2021.

The final decision was taken in private following disruption from angry health campaigners earlier in the session.

To house the new unit at William Harvey Hospital will require a new build 32 bed ward, linked to the existing stroke ward to create a single unit The total cost for the build is estimated at £20.9million.

Currently for east Kent there are 24 stroke beds at WHH, 22 at QEQM and 24 at K&CH, only the 46 beds at WHH and QEQM admit hyper acute patients.

The new units are expected to reduce financial deficits in the Kent and Medway service, although a review of those finances will take place.

These costs are in addition to a total capital investment of £27.7million.

A new build at Canterbury

The JCCCG agreed the William Harvey unit option despite proposals that could see the service having to be shifted again if a new general hospital is built in Canterbury. As part of looking at two options for urgent, emergency and acute medical services in east Kent, commissioners are also discussing whether to move maternity and children’s inpatient services to a new hospital in Canterbury and options for moving specialist services to either Canterbury or Ashford.

There has been an offer by Quinn Estates to build the shell of a new hospital in Canterbury as part of a development of 2,000 new homes. It would involve changes at all three sites, including moving some services currently provided at the William Harvey and QEQM hospitals.

Under this option there would be an A&E department for east Kent  at the major emergency centre at Canterbury. This would mean that A&E, acute medical care and complex inpatient surgery, which currently take place at William Harvey and QEQM, would relocate to Canterbury. This would likely include moving the HASU despite the investment at Ashford.

Rachel Jones, Director for the Kent and Medway Stroke Review, said: “We would like to thank everyone who has been involved in the stroke review. This has been a detailed and robust process, led by stroke specialists dedicated to improving care for patients.

“We undertook an extensive public consultation, involving thousands of people who told us they understand why stroke services need to change, but we recognise they have concerns about the impact of those changes.

“We have listened carefully to those concerns and considered them in detail. While our proposals have not changed, we are working to address issues such as travel and transport and putting plans in place to make sure that rehabilitation and support services are closer to home and better planned.”

In a statement, stroke consultants from each of the four hospital trusts in Kent and Medway said:”People who live further away from the proposed specialist centres are understandably worried about how long it will  take them or a loved one to be transported there by ambulance. We have heard concern that stroke patients could come to harm as a result of longer travel times. There is talk of a ‘golden hour’, and fear that more deprived communities will suffer unless there is a specialist stroke centre near them.

“We understand why these arguments sound concerning, but they have little basis in fact.

“The reality is, sadly, that any stroke patient who dies within a few hours of having a stroke would almost certainly have died whether they were at home, in an ambulance or being cared for in the best stroke unit in the world. For the very small percentage of patients whose strokes are the cause of almost instant death, or who fall into a coma and never wake up, currently little can be done.

We can do that best by getting them to a specialist stroke centre where they can get clot-busting care within 30 minutes of arrival if they need it, and round-the-clock care for the vital first few days after their stroke.” 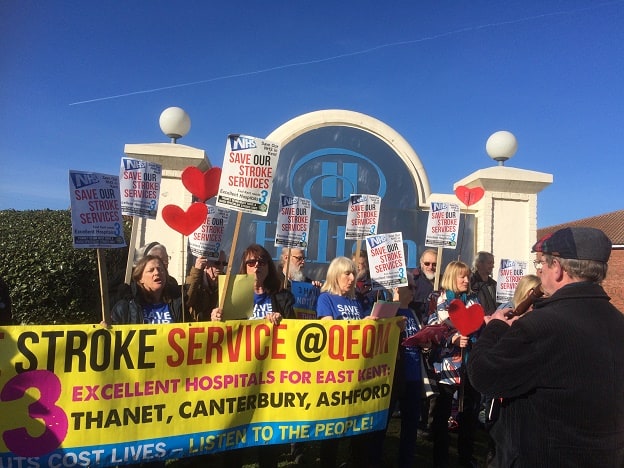 Save Our NHS in Kent (SONiK) has fought the proposals, insisting a fourth HASU is needed at QEQM. Campaigners were at today’s meeting until the decision to remove the public.

SONiK spokesman Carly Jeffrey said: “We are very disappointed that not one of the 14 doctors present voted against, but we are also not surprised. We asked why six of the doctors were missing, but the chair was very petty and refused to say, telling us we must wait for the minutes.

“The audience were very unhappy about the way their questions were handled, and about the claims that the consultation was a big success, which resulted in the public shouting out ‘Sham! Sham!” in unison.

“Our aim now is to appeal to the members of the KCC HOSC to vote to refer this plan back to government. The HOSC is a committee made up of councillors who can get the plan referred back if they think it’s unfit.” 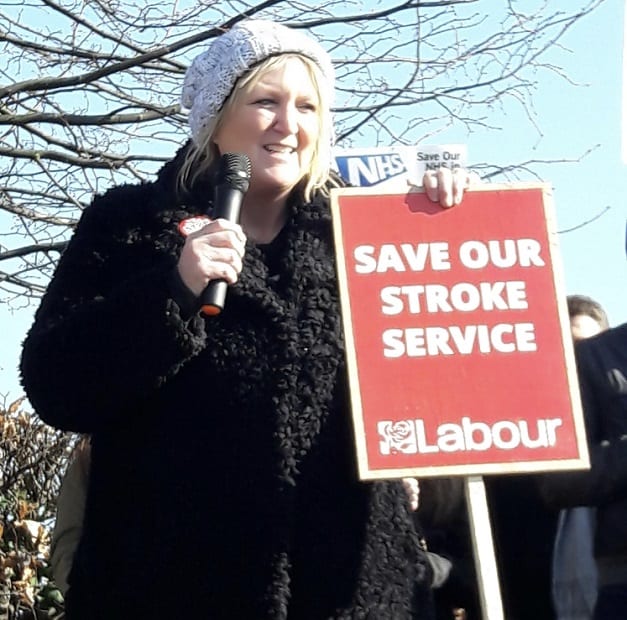 County councillor Karen Constantine, who was at today’s meeting, branded the decision “predictable and disappointing.”

She added: “Leaving East Kent without a HASU is a disgraceful decision and leaves more questions that now need urgent answers from our NHS managers. What reassurances will be given to staff at QEQM? Morale must be protected and we need to retain our existing skilled and dedicated stroke unit staff. What action is being taken?

“Once either the Darrent Valley or Maidstone HASU’s go live, will Thanet residents be expected to be sent to either of those locations?  What prospect is there for the potential for a HASU in Canterbury?

“What investment into ambulances services is now being made, including the recruitment of any necessary staff, that will ensure Thanet residents will have the emergency transport they require and the same degree of safety and outcome as residents else where in Kent.?”