More than 170 firearms, including a deactivated Kalashnikov AK-47 assault rifle, and nearly 4,000 rounds of ammunition have been handed in during Kent Police’s firearms surrender.

The initiative, which ran between Monday 21 January and was extended to Wednesday 6 February, saw a total of 172 firearms and 3,857 rounds of ammunition being handed over to officers.

The campaign allowed people to dispose of unwanted or illegally held firearms or ammunition.

Some of the most interesting items included a deactivated Kalashnikov AK-47 assault rifle which was handed in to officers on 24 January along with magazine and dummy rounds. Three Italian starting pistols and a Walther PPK blank firing replica pistol with some blank rounds were also surrendered. 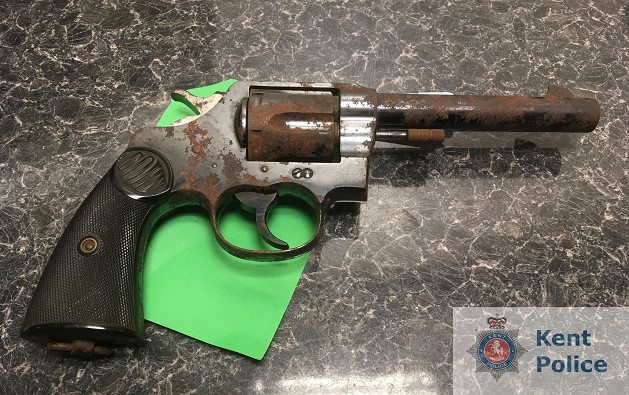 On the first day of the campaign a Colt ‘New Service’ .445 calibre revolver was surrendered. This firearm was made in 1898 and had been used by British and Commonwealth forces until the end of the Second World War.

On 22 January, 12 firearms were handed in at North Kent station and of these three handguns, all revolvers; a Hopkins and Allen, a Webley Second World War service revolver and a Colt revolver, were viable live firing guns.

Detective Chief Inspector Patrick Holmes said: “We had an excellent response to this year’s surrender. Many firearms are held innocently with owners unaware of their illegality, or are overlooked heirlooms forgotten in people’s homes.

“The initiative gave residents the chance to hand in unwanted firearms ensuring that they were safely removed off the streets and preventing them from being acquired and distributed by criminal networks.

“Every firearm off the streets is another weapon which has been prevented from being potentially used in criminal activity and potentially another life which has been saved, so I would like to thank all those residents who used the surrender as an opportunity to hand in their unwanted or illegally held firearms and ammunition.”