Today (March 15) is Red Nose Day with events across the isle raising money for Comic Relief.

Joining the fundraising fun today are children and staff at Garlinge Primary School and Nursery who have attended classes wearing red clothes and red noses;

Comic Relief is a major charity that Garlinge Primary has supported over many years since it started 20 years ago. The charity has raised over £337 million and made over 7,000 grants to organisations both in the UK and internationally.

Throughout  Red Nose Day  children will be exploring the issues facing youngsters across the world and showing them how the money raised can make a difference. 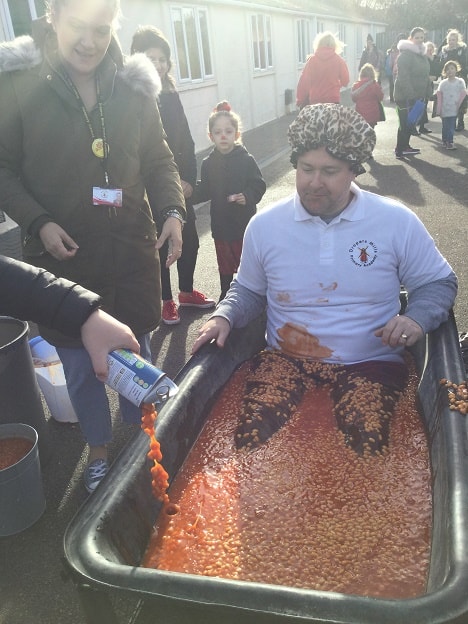 At Drapers Mills primary the children are paying to cover head of pastoral care Mr Wilson in baked beans.

He will be in the baked  bean bath for the entire day to raise funds for the charity. 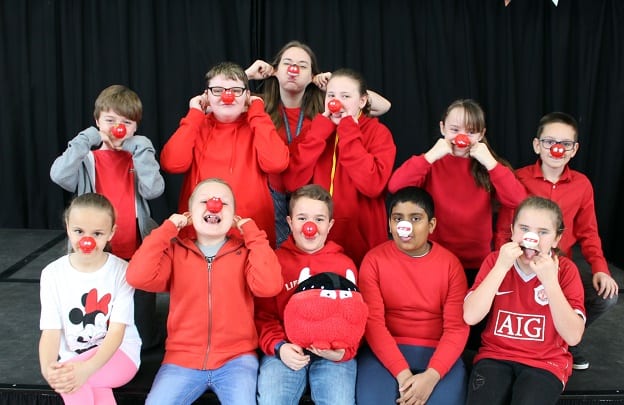 In Ramsgate Newington Community Primary went nutty for Comic Relief with donations to wear crazy costumes and outlandish outfits to school raising around £700.

It is one of the school’s biggest totals for red nose day as children and staff celebrated the special work of the charity since its launch in 1988.

Head teacher Cliff Stokes said: “What another magnificent response from pupils, families and staff to charity.

“There is so much financial pressure on everyone these days but we can always rely on our Newington school community to dig deep to help those who are worse off than ourselves.” 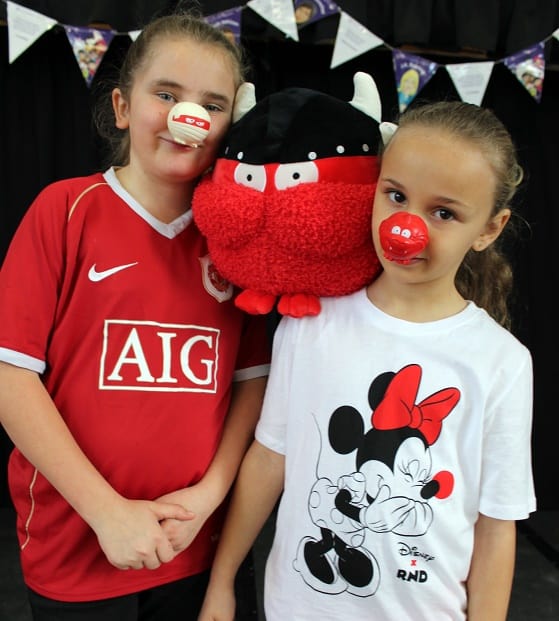 “There were some lovely costumes on show and our normal blue uniform was transformed to sea of red clothes for the day.”

The message of caring for others was reinforced in a special assembly presented by teacher Hannah Pullman.

She explained: “The theme of the assembly was about knowing where the money goes to that we raised for Comic Relief.

“I spoke about refugees, who they are and what many of them have had to endure. The children watched a short video about a child who was a refugee and how he is supported by the charity. 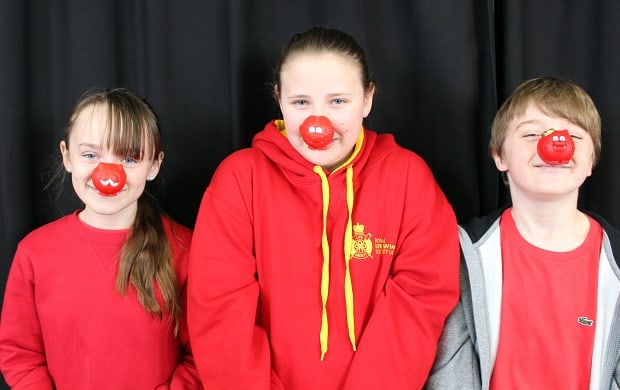 “We also linked his experiences to a book called ‘The Boy at the Back of the Class’ by Onjali Rauf which is a thought-provoking story.​ Told with heart and humour, the story is a child’s perspective on the refugee crisis, highlighting the importance of friendship and kindness in a world that doesn’t always make sense. 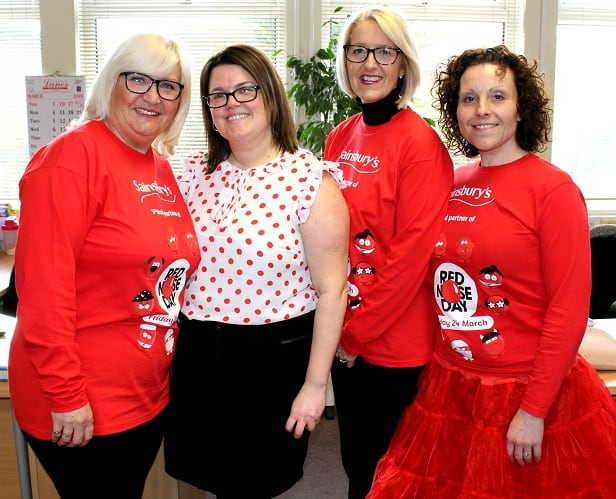 “We ended the assembly talking about gratitude and how, although it is important to think about the people benefiting from our donations, it is also important to be thankful for what we have.” 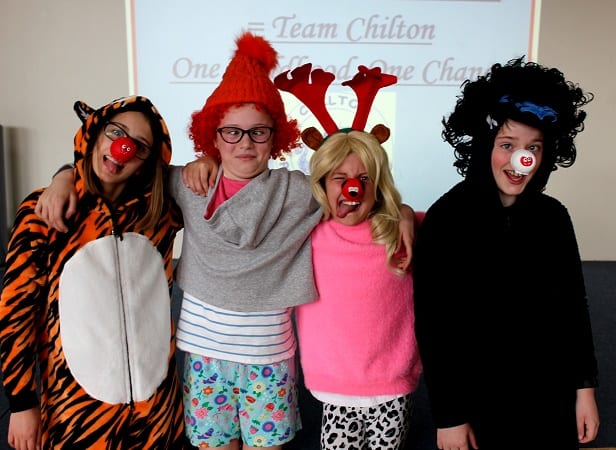 Cheerful Chilton Primary was a school full of smiles and fun for Red Nose Day.

Pupils of all ages donated to wear something daft, colourful and cheerful for a non uniform day in support of the Comic Relief charity. 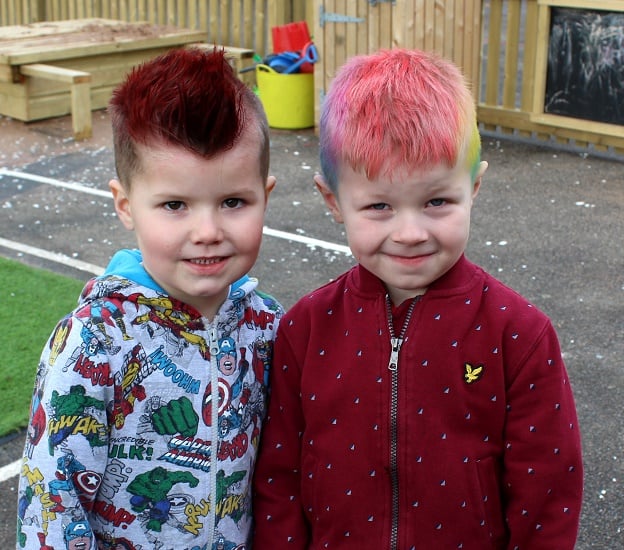 Some children had hair dyed red and rainbow colours, others wore bouncy head boppers, weird wigs, red noses, and silly spectacles – everywhere there were outfits and tops of all shapes and styles.

The accent was firmly on fun although there was a strong sense of caring for others who are in need. 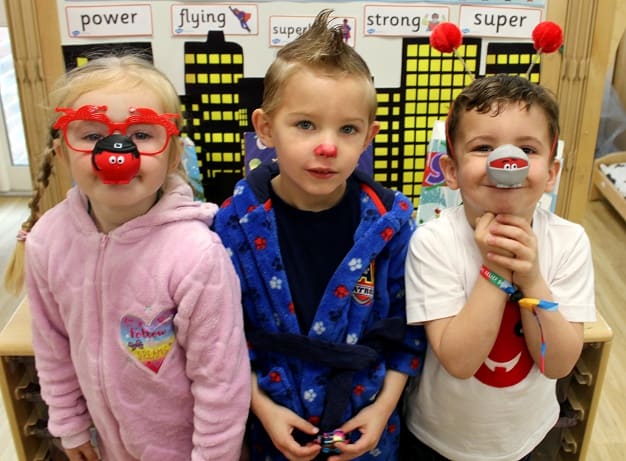 Head of School Kate Law said: “Red Nose Day is one of our favourite times of year at Chilton. Everyone joins in and there were some fabulous creative outfits on display in all our classrooms. 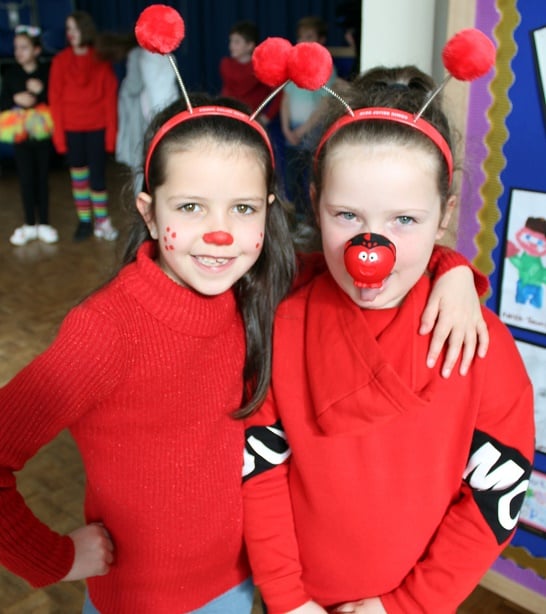 “We also think it is important to celebrate the fantastic work that the charity does supporting children and adults from all walks of life. 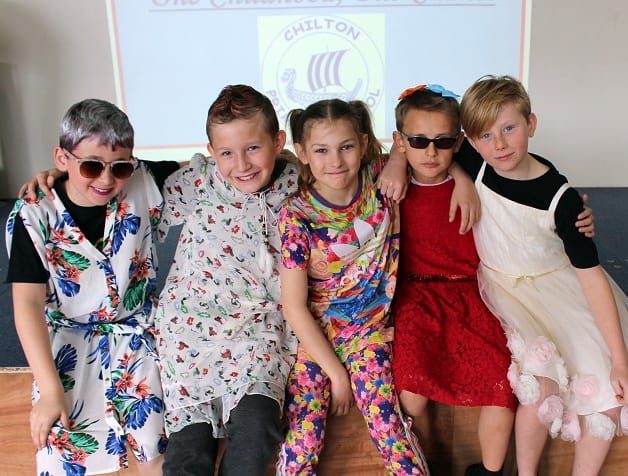 “Our pupils understand the work of Comic Relief and they want to be part of an important national fund raising event.” 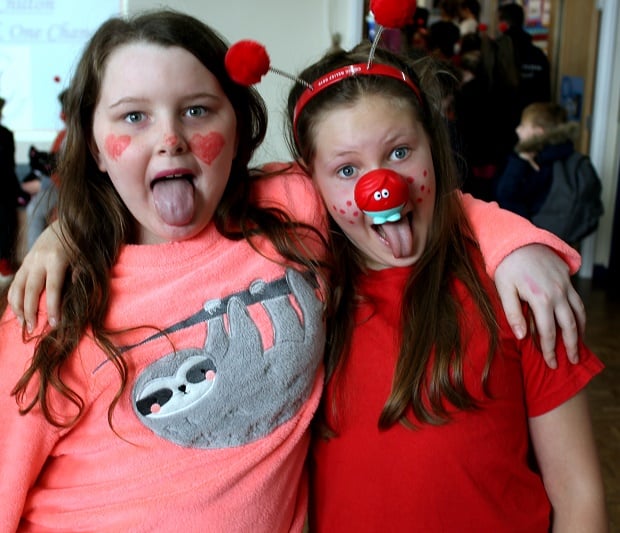 Chilton raised some £300 for Comic Relief. 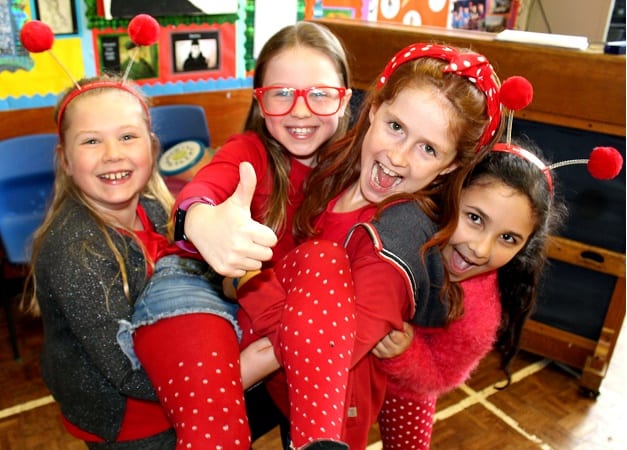 Upton Junior School pupils rocked the corridors and classrooms for Comic Relief by wearing something red, funny, and most often, both.

The school’s brilliant fundraiser saw an impressive and generous total of £725 for the charity.

Teacher Isobel Reed co-ordinated the fun packed programme that ran throughout the day.

She explained: “During our morning assembly we learnt about how the money raised goes towards local charities.

“At break time we had a bake sale. All the children were able to bring in baked cakes and then a team of Year 6 pupils priced and sold them.” 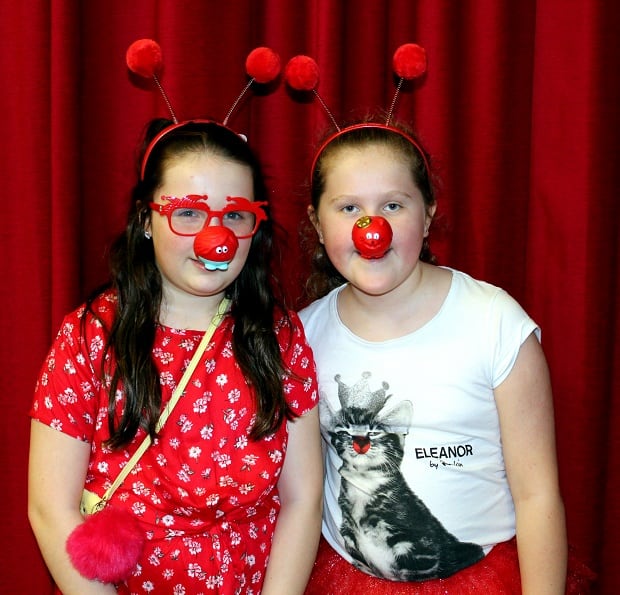 During the afternoon the school held a danceathon, in celebration of the gruelling record-breaking 24 hour plus non-stop dance that Strictly Come Dancing television presenters Tess Daly and Claudia Winkleman had completed during the week for Comic Relief.

Upton’s energetic event saw children from Years 3 to 6 dance in their wildest and wackiest way that they could all around the main hall. 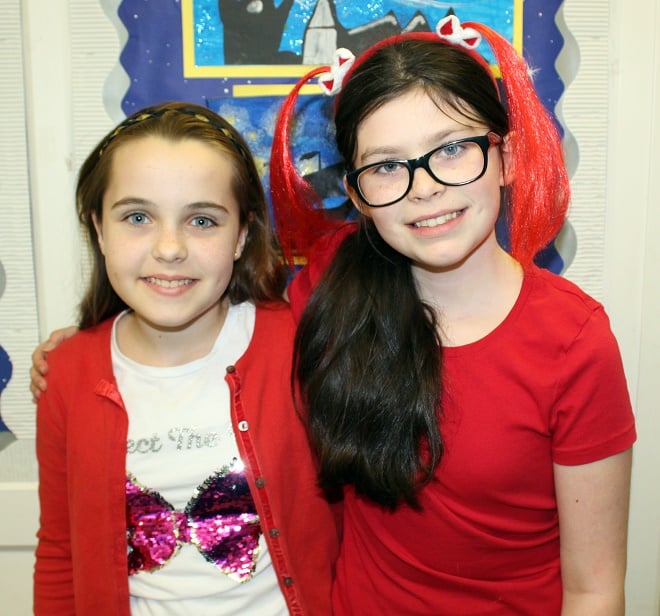 Comic Relief fun ended with a joke competition in each class. The children voted for their favourite joke and there were 16 individual class jokers by the end of the day. 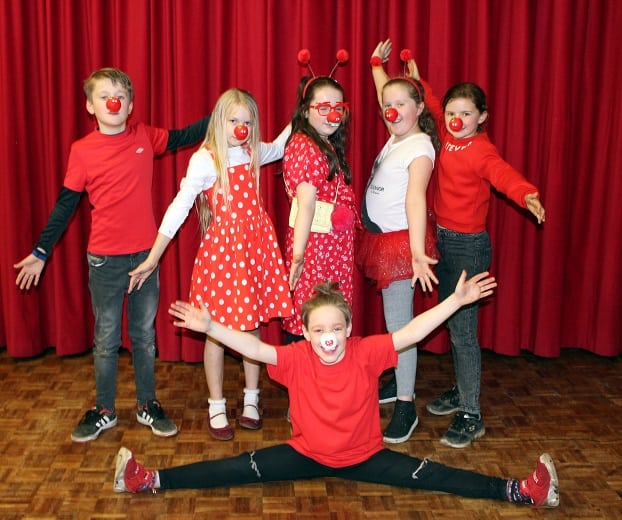 It is: “Why does Wally from Where’s Wally wear stripes? Because he doesn’t want to be spotted!”

Head of School Darci Arthur voted it one of the best Red Nose Day events at Upton. She said: “The sheer energy from our pupils and staff was infectious. There was a real lively buzz about the place and we raised a very impressive amount. 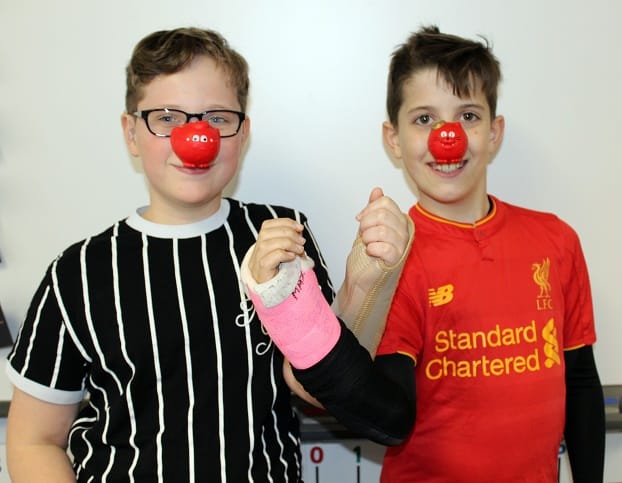 “There were so many creative outfits and hairstyles wherever you looked, the bake sale provided some tasty treats, the danceathon was great fun and the assembly at the start of the day really underlined the message behind Red Nose Day.”