The Pugin Society says proposals to turn the Granville Bars in Ramsgate into flats are “not appropriate.”

The bars, part of the former Granville Hotel, sold at auction on February 5 for £310,000 – well above the guide price.

The Granville Bars has sea views and sits in the block designed by the famous architect Edward Welby Pugin.

The Granville was a hotel between 1869 and 1946 before being sold by proprietors Spiers & Pond. It is now a private residence containing 48 self-contained flats.

The building was Grade II listed in 1973. The bar has been unoccupied for a number of years and is in need of restoration and improvement

It has now emerged that the buyer wants to create 12 flats and maisonettes in the property, dividing the great dining hall into three. 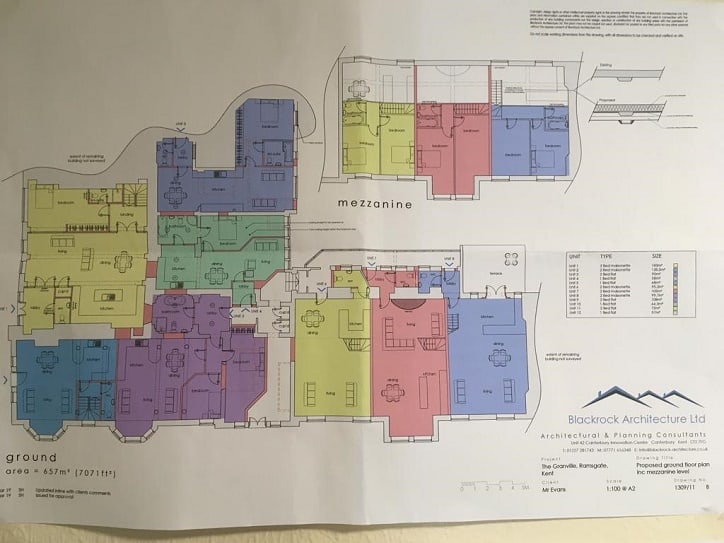 A statement from The Pugin Society says: “Edward Pugin supporters and enthusiasts will be alarmed to learn the purchaser hopes to convert this part of the building, including its extensive basement, into flats.

“Planning permission has not yet been sought, but the plans, which have been displayed to residents, have been seen by local members of the Pugin Society committee. They are not appropriate for the character and historic use of such a significant building, listed Grade Two and of great architectural and historical importance.

“Of particular concern is the intention to divide Edward Pugin’s great dining hall, with its extant decorative ceiling and great Gothic fireplace, into three apartments. The plans run counter to the whole spirit and nature of the building, which is a landmark in the town.”

The plans, drawn up by Blackrock Architecture Ltd, show the proposed apartment lay out and a mezzanine level.

The Isle of Thanet News understands there is also a community organisation bid to agree terms to restore the site and use it for local and creative uses.

When the Granville was a hotel it had more than 25 different kinds of baths. The baths opened in December, 1871 and were demolished in 1980.

In the years after 1873 the hotel was owned by bankers Coutts, a new hall was designed and completed in July 1874 by the architect J T Wimperis. This was demolished in 1982.

In 1877 the property was bought by solicitor Edmund Francis Davis, who developed the Granville Marina below the east cliff, and launched the Granville Express – a daily train service from Charing Cross to Westgate and Ramsgate Sands.

Davis also laid a marble skating rink in the Granville Gardens and completed a tunnel begun by Pugin from the gardens to the sands. The tunnel exits at number 3 Granville Marina.

Spiers & Pond Ltd bought the property in December 1898 and carried out remodelling works.

In January 1915, the Granville was requisitioned by the Government and became The Granville Canadian Special Hospital. It treated patients suffering from shell shock, nerve injuries and injuries to bones and joints. In April 1917 the hospital accommodated 809 wounded Canadian soldiers. The hospital closed later that year and the building reopened in 1920 after a £60,000 refurb. It was leased to the Empire Hotels Group in the 1930s.

A corner of the hotel was destroyed by enemy action during the Second World War. The bomb damaged corner was rebuilt in 2004 and became Granville Court. In 1947, the hotel was converted into flats and renamed Granville House. For the next 30 years, the building was managed and then owned by William and Florence Hamilton.

The Granville was a popular venue for ballroom dancing in the 1950s and 1960s as William Hamilton had installed a sprung floor. This hall, demolished in 1982, was also used as a count during elections and to host private and civic functions. In February 1956, the basement became a jazz club called The Cave. From 1974 until the 1990s, the building passed to a number of different owners.

There was a fire in April 1985 that destroyed the staircase, which was later restored in a £1.5 million overhaul.

The building includes the former Granville Bars on the seafront corner – which went under the hammer this month with Clive Emson. The bar closed around 1991. Adjoining the bar is the banqueting hall – completed in October 1869 by Edward Pugin.

The centre-piece of the hall is a huge fireplace inscribed with the motto ‘pile on the logs to make the fire great’. The fireplace cost some £250 in 1869.

The property sold at auction includes the main bar, ballroom, cloakroom leading to kitchen, foyer, toilets and the banqueting hall to rear on the ground floor and a number of rooms and a blocked tunnel on the lower ground level.