A sponsorship deal has been announced for the Ramsgate Week sailing regatta this July.

The Ramsgate Week committee has renewed the deal with Broadstairs-based Euromarine Insurance, which is owned by Astonlark Insurance.

Commodore of the Royal Temple Yacht Club, which hosts the event, Andy Beaumont-Hope said: “We have been looking for a perfect match for a headline sponsor since the days of the Woolwich Building Society in 1999. We are delighted to welcome Euromarine Insurance onboard and hope this is the start of a long mutually beneficial relationship with them.”

Euromarine made the announcement on its website today (March 1) saying: “Euromarine Insurance is proud to announce it is the headline sponsor for Ramsgate Week 2019. We sponsored the event last year and enjoyed it so much, we wanted to show our support once again this year.” 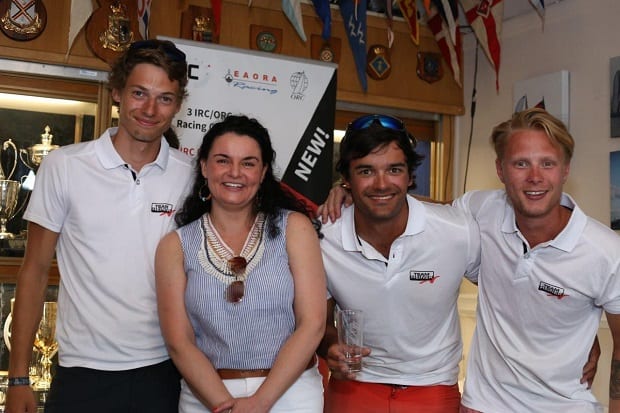 Hayley Avis, Divisional Director at Euromarine (pictured above with Team Heiner last year), added: “We’re so pleased to be a part of Ramsgate Week for another year. We’re really looking forward to meeting all the competitors and everyone involved. We’re sure it’s going to be a week to remember!”

Ramsgate Week has been running a successful formula for more than 100 years and has bucked the trend of other regattas by retaining competitors from all over England and Europe.It has included Jean-Marc Devos from Gravelines as part of its committee.

Newly elected chairman of Ramsgate Week Karen Cox said: “I hopes to build on my predecessors success and take the event to new strengths.”

The Early Bird discount is now available for everyone entering before the end of May. Find out more here