My fellow columnist and frequent debating foil Melissa Todd recently wrote about her son’s tattoo that he had emblazoned on his body. I was immediately intrigued, as she quoted a figure that 1 in 5 people now have a tattoo. As I am one of that fraction, I was rather proud to be in another minority – being in other minorities, it doesn’t hurt to pile on one more.

I was first tattooed in my late 20s, and I did it primarily because I wanted to challenge perceptions – someone said to me that I didn’t “look like the sort of person who has tattoos.” That was a red rag to a bull for me, and it did nothing except prompt me to do it more urgently.

Some people might go for a discrete tattoo for their first one; but not me. Discrete, yes, in the sense that it’s on my right arm and can easily be hidden by a long enough sleeve or a coat. But subtle it ain’t; I mean, take a look at it. 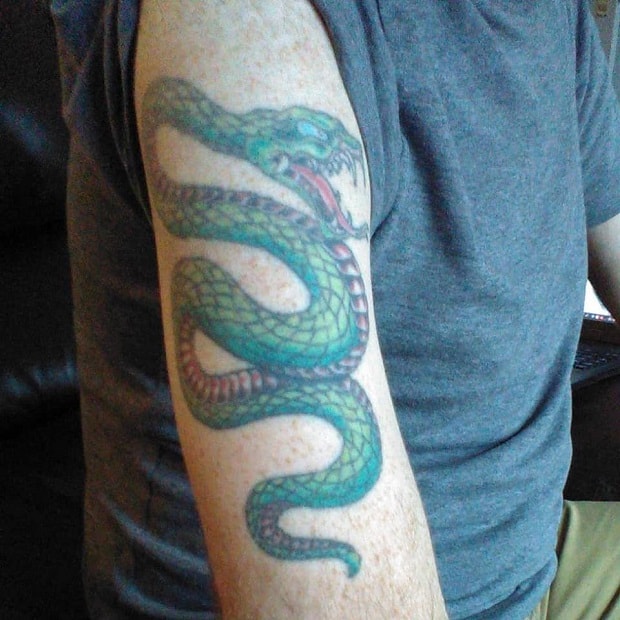 It was done entirely in one sitting – albeit a six hour sitting – at a tattoo place in Canterbury and, as I hope you’ll agree, the art-work is tremendous. The attention to detail – which you can only really see close-up – is exquisite; whether you like tattoos or not, I’d like to think that most people could agree that tattoo artists really are artists.

I wanted to challenge perceptions, but I wasn’t going to start having tattoos on my face or neck or hands. I’ve always worked with the public, and people – some people, granted, not all – sometimes judge you on the basis of things like this. I probably have done in the dim and distant past, but that was then and this is now.

I liked going quite dramatic on my very first tattoo, but it was also oddly addictive; one didn’t feel enough, but I didn’t know what else I wanted. Having a snake tattoo was more about making a statement than because I loved snakes above all other animals – it was just a chance to have something new, but I wanted my next tattoo to be something personal to me.

So, this is what I finally got; 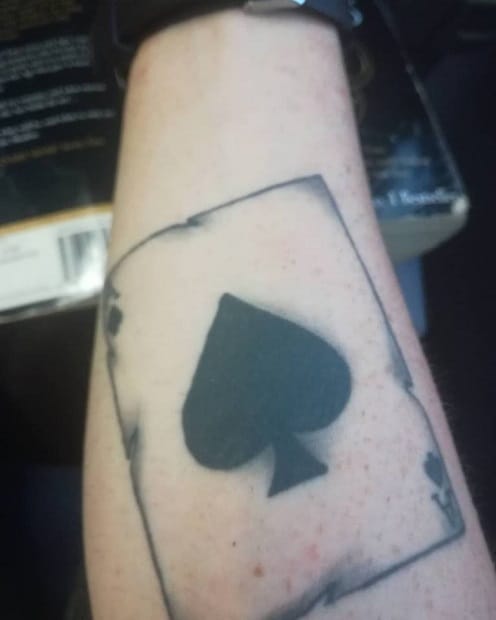 I might get it coloured in; my friend Jamaal has a vaguely similar design, and the colours he chose in the background are lovely, so that’s something I’d consider. But this is on my right forearm, and I like it for different reasons – there’s some direct symbolism connected to it, and I wonder if anyone might know what it is.

Yes, I like the occasional flutter at the casino, but that’s not the reason why I chose this one; I’d be intrigued to know if anyone is thinking laterally enough to make the connection.

In any case, Melissa’s son now has his first tattoo, and who knows if he’ll be tempted to get any more. I was – and still am, in fact. I’d like to get a third one at some point, but again, I need to decide on something personal. Maybe I’ll wait until the new year and make a final decision then.

What are you favourite tattoos? Let me see some of the best out there; maybe I’ll get some inspiration from one or two …!