Thanet council cleared mess left behind by rough sleepers in St George’s Church graveyard in Ramsgate on Friday – but just days later this is how it looks.

The group, who had pitched around six tents on the site, left the graveyard following a fire on November 12 when a man’s tent ‘exploded’ in what is thought to have been an accident with a camping gas bottle. No-one was injured. Council workers attempted a clear up but the site is again a mess with rubbish strewn across the graveyard.

Ramsgate mayor Trevor Shonk said he visited police following the fire to make sure it was not an arson attempt targeting those sleeping on the streets.

He says a flurry of criticism that he was reporting the group was unwarranted.

He said: “I have dropped food for them and my clean clothes. The reason I went to the police was to make sure someone hadn’t fire bombed them.

“I wanted to find out how and why the fire started and check their welfare. I was told officers are awaiting a report on the matter from the fire brigade. 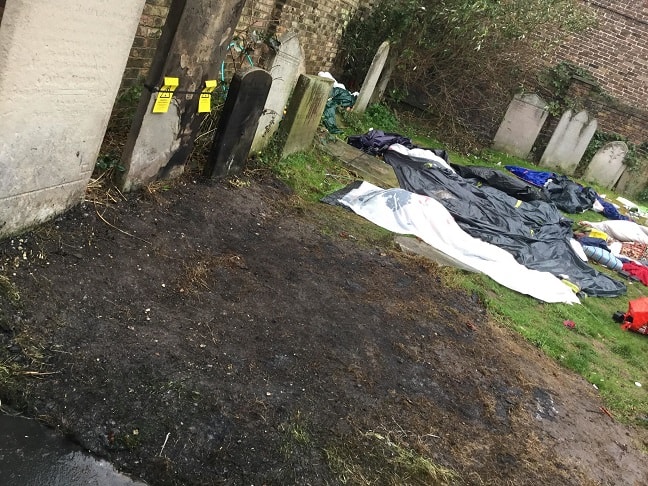 “It is very easy for people to knock me but I know what I do for all homeless. Every year I give money to the Salvation Army and to the Sailors’ Church for Christmas dinners.

“I also called Thanet council to clear the site for health and safety reasons.”

The group had been sleeping in the graveyard for many weeks after the church gave permission for one man to stay there. There have been complaints from residents of intimidating and antisocial behaviour. St George’s Church was involved with trying to find accommodation for group.

Thanet Winter Shelter scheme, which runs from November to March and offers beds, advice and practical help, food and cleaning facilities for people living rough, opened its doors on Monday.

The scheme takes place at different isle churches throughout the four month period.