A display of poppies created out of used plastic bottles will be unveiled at Westwood Cross to mark the 100th anniversary of the end of World War One.

Westwood Cross has been working with Thanet artist Sioux Peto to create a stunning community art installation consisting of hundreds of the handmade poppies. The Westwood Cross Poppy Project has more than 500 poppies created so far in special workshops with groups including East Kent Mencap, The Gap Project, Minster Church of England Primary School and 1st St Lawrence Scout Group as well as individuals, staff and children during half the October half term.

The display will be unveiled as part of a Remembrance procession on Saturday (November 10) at 10am. Everyone is invited to join the procession at the Viking Ship Sundial, near Next at Westwood Cross. The procession will then make its way to the Memorial Wall where the Minster Church of England School choir will perform and a short service will take place. 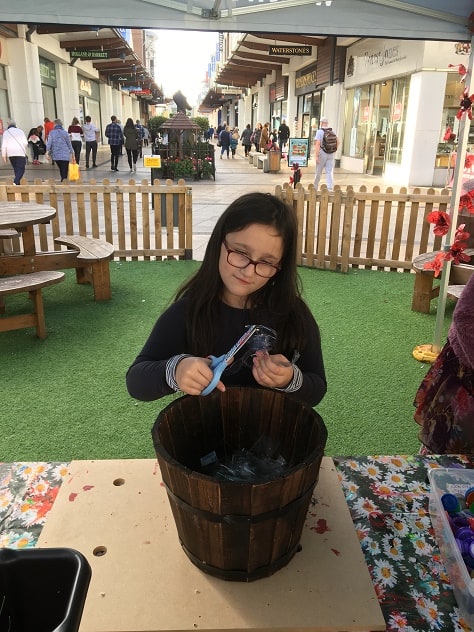 Francesca Donovan, centre manager at Westwood Cross Shopping, said: “We hope to welcome many people from the local community to take part in this important commemorative event. The poppy art installation is a stunning tribute, and we are aiming to have 1,000 poppies created by Saturday.

“The Poppy Project has been in support of the Royal British Legion’s Poppy Project and will form part of the collections the charity is undertaking in the lead up to Armistice Day.”

Also attending the event will be representatives from the Royal Air Force, Army and Sea Cadets. A variety of vintage military vehicles will be on display with members of a local re-enactment group dressing in vintage style clothing. Armed Forces charity, SSAFA will be in attendance, joined by current and ex-service men and women to pay their respects.