For Wanderers there was a first team debut for No7 Sam Taylor and a first start of the season for Nick Herbert at 10. Adam Gaddes returned after injury in the second row and Marius Thompson was at full back after a successful outing with the Norway national side.

On a top quality playing surface and on a sunny, still afternoon the stage was set for an open match and that is what both teams delivered.

Thanet’s willingness to open up at every opportunity was not subdued by a succession of early penalties against them. On 20 minutes a strong Park attack was well contained before they converted the second of a pair of penalties to give them a 3-0 advantage. Herbert found a long touch to set a good field position and Neil Wakefield’s fine work at a breakdown won a penalty.

Tom Walton went close after flitting past home defenders. Wanderers defence was holding firm with Sam Taylor outstanding. No 6 David Lemon made metres from a stolen line-out but as half time neared the hosts’ pack camped close to Wanderers’ line. Three scrum penalties saw loose-head prop Jay Morbey receive a yellow but as he retreated his colleagues effected a turnover after more brave defence. The respite was brief, for as he signalled a third further scrum offence, the referee ran to the posts to award a penalty try and make the score 10-0 at half time. 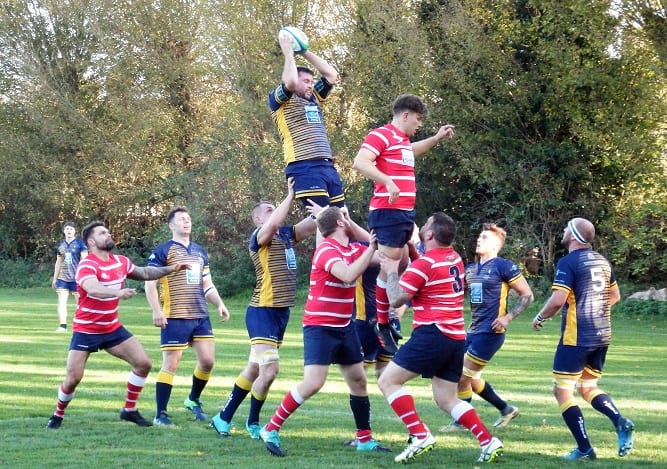 The intricacies of front row play are a mystery to those with no experience there but a perceived injustice at the award of a penalty try certainly helped fire up the Thanet side at the opening of the second half. Now playing with the advantage of the slope the 14 man Wanderers side stormed into the opposition half and Captain Adam Gaddes led a forward onslaught to Park’s line before the ball was released to the backs.

Outside centre Dan Hill was unstoppable as he powered through the home defence to touch down close to the posts and make his own conversion straightforward. Back came Park but Thanet were not to be denied.  and a second try five minutes later was started in their own half. Lock forward Arek Janeczko carried strongly before offloading well. More fine handling and a pick up off the toes hurried the ball to Reece Hougham who threaded his way through defenders but when denied close to the line found Hill in support who claimed his double and then slotted his second conversion for 10-14.

The momentum was now very much with Wanderers and Stewart Plumridge was a powerhouse in Thanet’s backline, breaking the line and tackling in his inimitable way. Centre partner Hill’s long penalty then set an attacking line-out before a powerful drive for the line ended with Hooker Neil Wakefield claiming the third try wide out left. No 8 Andy Letts made a fine catch from the restart and again drove Thanet forward. Two Park penalties had Thanet defending but Letts once more led the resistance and cleared the danger. Thanet’s fourth and arguably their best try came around the hour mark. Wakefield was central to the score that took Wanderers inexorably from near their own line and through many hands before Walton touched down for his fourth try from five starts this season.

Hill’s conversion gave Wanderers a 26-10 lead. Chris Hood joined the fray from the bench. Park came back hard but resolute Thanet defence forced errors. Despite struggling for fitness Danny Clement had put in a good shift at loose-head prop after joining the game just before half time.  He and Sam Taylor now were forced off causing a pack re-shuffle as Lemon and Morbey returned. Tighthead prop Kamil Wiecaszek was also in difficulty after a typically whole-hearted display but continued after treatment.

An interception gave Park possession with under 10 minutes remaining and they  hardly relinquished it in that period. Six minutes remained following a converted try that made it 26-17 and it soon became 26-24 as Park played without errors. The longed for whistle shrilled, not for full time but for an infringement by Wanderers. This gave the opportunity for the home kicker to win the game with a long range penalty from in front of the posts. Over it sailed and a memorable and enjoyable match had been snatched from the Wanderers by a side who refused to believe they were beaten.

Wanderers head coach Mike Pond was typically upbeat after the match and is confident his side will continue to improve and aim to avoid conceding over twenty penalties as in today’s match. There were stand out performances from Sam Taylor and Nick Herbert whilst Dan Hill scored twice and was strong in defence. Charlie Knight got through a mountain of defensive work with few opportunities to get on the score sheet but today’s man of the match was Neil Wakefield, who scored and was on top of his game in all areas.

Next Saturday (October 27) the first XV are at home to Heathfield and Waldron who are just above Wanderers who continue to prop up the league despite picking up a couple of bonus points today. The 2s are also at home against Sevenoaks and the 3s are AWAY versus Sittingbourne and not at home as shown in the fixture card. All games will kick off at 3pm.