It was another beautiful afternoon for rugby and a good crowd watched a blend of youth and experience take the field for Thanet 2s in their Premier 2 East League fixture versus Vigo.

The visitors kicked off down the pitch faced by a brisk southerly breeze but were soon on the back foot when a chaser strayed in front of the kicker. From the resultant scrum Thanet established a good position and were dominant before the ball reached full back Jake Wittlesea who touched down wide left after just three minutes. No conversion but Wanderers led 5-0.  A penalty to the visitors set them near Wanderers line but resolute defence ended with a clearance to the ten metre line.

Another Vigo penalty 25 metres out and in front was converted to make the score 5-3. The visitors were coming more into the match using their big runners well as Wanderers were frequently penalised for careless technical offences. 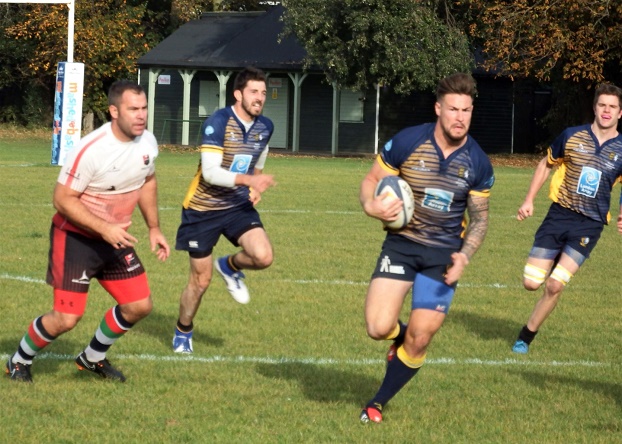 Outside half Nick Herbert was playing his first match of the season. His break released winger Louis Marshall who powered over for Herbert to convert and make it 12-3. With ten minutes remaining to half time, further penalties pegged Thanet back. Good defending initially kept the line intact but a long pass right stretched the defence bringing a Vigo try that was not converted. 12-8 at half time.

Thanet were on the attack from the first whistle of the second half. Good handling in midfield was halted illegally. The resultant penalty to the corner and quick ball from a scrum reached outside centre Ryan Copp who finished well. Herbert added the extras for 19-8.

Copp was the architect of the fourth try two minutes later when his break released Wittlesea under the posts for his double  Two more points from Herbert’s boot opened a 26-8 lead. Hooker Kurt Pearson was forced off through injury with around twenty five minutes remaining. Indiscipline brought more penalties and again stalled Thanet’s momentum.

Vigo’s persistence was rewarded with a second try after their forwards battered their way over to make it 26-13. There was time for a final flourish from Wanderers with Jake Mcgee’s lovely inside pass to Will Craven resulting in a fine try for the young sub. Finally a good bounce favoured Wanderers and Jimmy Robinson raced in for the final try and the conversion ended the scoring in an enjoyable match at 38-13.

A special note of thanks for referee Paul Rogers whose performance and fitness belied his 74 years. Kurt Pearson was this week’s man of the match with good line-out throw ins and hard work around the breakdowns.

The 2s are away to Medway and the first XV travel a little farther to Charlton Park on Saturday.

The 3s are at home against Hastings and Bexhill. All fixtures kick off at 3pm.