Plans to demolish two seafront buildings to make way for a new 124 bedroom hotel in Margate have raised protest from conservation groups who say they are important pieces of the town’s history.

Ziggy’s rooftop bar and the adjacent empty property will be flattened ready for work to start on a 5-storey ‘lifestyle’ hotel proposed by Dreamland’s operating company, Margate Estates.

The ‘Seaview’ hotel, which will lie in the Margate Conservation area, will have the 124 rooms, a gymnasium, meeting rooms, a shop or café with frontage onto Marine Terrace, a restaurant and bar at the ground floor and a rooftop bar.

The rooftop bar will be set back from the main building line and partially enclosed. It will be constructed of lightweight glazing, giving  the impression of two stacked glass boxes. 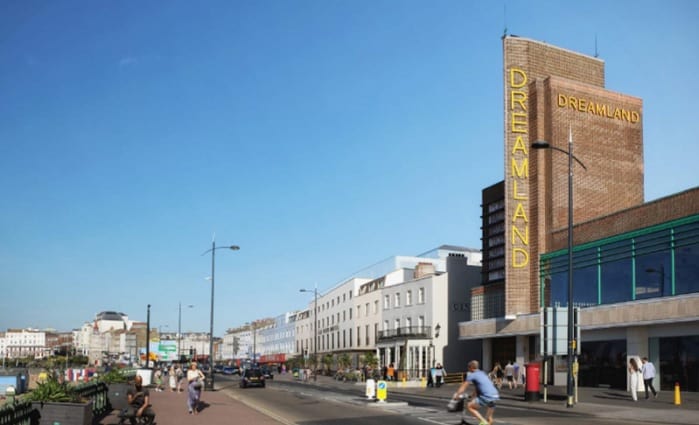 But Margate Conservation Area Advisory Group  and The Twentieth Century Society say the properties at 48-49 Marine Terrace have a fascinating history from the town’s booming tourist years of the late 19th and early 20th centuries.

Number 49, currently home to Ziggy’s rooftop bar and formerly Escape nightclub, was constructed in 1935/36 as the West End Restaurant.

It was commissioned by Samuel Isaacs (1856-1939), a Jewish businessman who opened his first fish and chip restaurant in the East End of London in 1896. It served fish and chips, bread and butter, and tea for nine pence. It was the first of its kind aimed at giving the working class the opportunity to eat in at affordable prices.

His restaurant became a chain, with branches in Brighton – which still exists as Harry Ramsden’s Fish and Chips – Ramsgate and Margate, amongst others. When the building opened, it had two floors of restaurant over the basement, and a roof terrace on top. A sign above the entrance proclaimed “Accommodation for 1,000“.

The restaurants were carpeted, had table service, tablecloths, flowers, china and cutlery, and made the trappings of upmarket dining affordable to the working classes for the first time. Menus were expanded in the early 20th century to include meat dishes and other variations as their popularity grew to a total of 30 restaurants.

Sam Isaacs’ trademark was the phrase “This is the Plaice”, combined with a picture of the punned-upon fish.

The architect of the building was local firm, Messrs Gardner & Dale. The senior architect was W.R.H Gardner FRIBA. This firm still exists, after changing partners’ names over generations, as the Duncan + Graham Partnership in Cecil Square.

Other Margate buildings by W.R.H. Gardner were the Northumberland Hotel (1938, now Northumberland Court) and the Lighthouse on the Stone Pier rebuilt in 1954 after the storm which demolished its predecessor.

The Northumberland Hotel was built for Jewish people, with its own Synagogue, which opened in 1938.

The ‘Ziggy’s’ building was refurbished last year and underwent alterations to the frontage and facade.

A spokesman for Margate CAAG said: “It’s one a just a handful of examples of ‘Modernism-by-Sea’ in the 1930s, just two years after Dreamland Cinema complex, and one year after the De La Warr Pavilion in Bexhill.

“These Modernist sea-front buildings were intended to a serve working people in beautiful surroundings. They served affordable food, with waiters, table-cloths and carpets. It’s from an era where Margate offered the best possible experience for the working classes. As Henry Iles of Dreamland said in 1935 “Nothing is too good for Margate, the better the places of entertainment were made, the greater success Margate would achieve”.

“The building as a form and a type of construction has many similarities with the adjacent Dreamland, and forms an important ‘group’ of Modernist 1930s buildings on the seafront. No. 49 clearly responds well to the Sunshine Cafe on the opposite side of the prominent ‘fin’ of Dreamland complex, both with vast sea-facing windows embracing the view, and reflecting the setting sun in their glass.

“Number 49 is an important survivor of Margate’s Modernist and Jewish heritage, a key moment in time just before the outbreak of World War Two where Margate’s aim was to provide the highest quality experience for the working poor.

“To demolish it now is to diminish the evidence of Margate’s proud and rich cultural history bridging divisions of ethnicity and class. To replace the building with a poor ‘ghost’ of the terrace which preceded Sam Isaacs’ palace for the people is to deny its presence at all.”

Margate CAAG says neighbouring number 48 is one of the few surviving Regency terraced houses in that area and appears to be largely unaltered externally, even retaining its original roof. Most if not all of the others in the terrace have been significantly altered.

The group says it does not object to the principle of a hotel on this site, but cannot back the demolition of two significant historic buildings.

A spokesman for The Twentieth Century Society added: “It is a shame that evidence of the building’s former use and importance have been lost, especially through the replacement of the seafront façade in recent years.

“The former Sam Isaac’s fish and chip restaurant would have once reflected the growth Margate as a seaside resort destination in the south east of England, also closely linked to the popularity of the fish and chip industry.

The planning statement for the scheme adds: “Over the last five years there has been significant tourism growth across Kent, Thanet and specifically in Margate which has sparked a renewed local confidence in development within this sector.

“The provision of additional quality visitor accommodation, to increase bedroom capacity, is seen as being vital to increase the volume of short breaks and business tourism.”

Margate Estates add that the new building will “integrate positively into the surrounding context and seafront character of the area due to its high quality design that would reflect the historic seafront terrace with a contemporary addition.”