As the season comes to an end, members of Thanet Athletics Club have been exceptionally busy.

Poppy Rowland-Hill, Eve Seery and Lily-Ann Showers competed in the U13 County Pentathlon Championships in Dartford on August 27.

George started with a solid long jump and discus throw followed by the javelin, finishing day one with an outstanding 400m run.

Day two started with the 100m hurdles where George achieved a personal best of 14.81s. Next was the high jump before his penultimate event saw him in the shot putt. That just left the 1500m where a gutsy run saw George end his weekend in 14th place with a personal best point score of 4443pts

On a very windy day there were exceptional performances from Thanet athletes in a range of events that covered all track and field contests, with age ranges from U11 girls and boys up to senior men’s and women’s competitions. There were some outstanding performances from many master’s athletes from all clubs that attended. At the end of the meeting a charity springboard high jump challenge raised over £200 for the clubs chosen charity and provided much amusement at the end of a very busy and successful day. 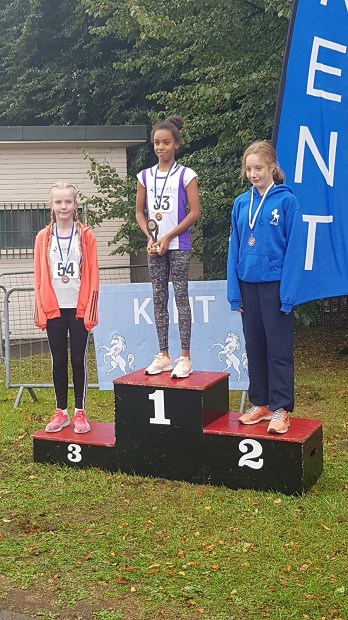 On September 16 Lyn Sole travelled to the Kent master’s jumps championships held at Medway Park in Gillingham. Despite a very strong competition, Lyn managed to jump her way to a gold medal and become Kent master’s long jump champion.

The final meeting of the season was held in Erith spanning the weekend September 22-23.

Poppy Rowland-Hill, Lilly Ann Showers, and Eve Seery competed in the U13 girls County Champs in the individual championships on the Saturday. All three cruised through the heats of the 70m hurdles and lined up in the final together. Lily-Ann was the pick of the weekend’s performances when she scooped the Gold medal winning by 0.01s! Eve ran a personal best in the final to take a Bronze medal and Poppy finished 7th.

Poppy and Eve competed in the shot putt earlier in the day. Poppy recorded a personal best to finish just out of the medals in 4th and Eve threw outstandingly well to finish 7th.

Poppy and Lily-Ann also ran in the 150m heats. Poppy qualified for the final with a personal best but sadly pulled out after picking up a slight injury from running three races in the space of an hour and Lily-Ann just missed out with a time of 22.31s.

Also on Saturday Bianca Shuster competed in the Javelin, shot putt discus and hammer throws. Bianca managed gold in the hammer and javelin, becoming Kent masters champion for both, and managed second place in the discus and shot putt.

Konrad Farrell was set to compete in an amazing 10 events over the two days in the U20 men’s decathlon.

He secured the title of Kent decathlon champion on the Saturday with an outstanding display of athleticism over 5 events.

Thanet Athletics Club have had an outstanding season and credit goes to all athletes, coaches and supporters of the club.